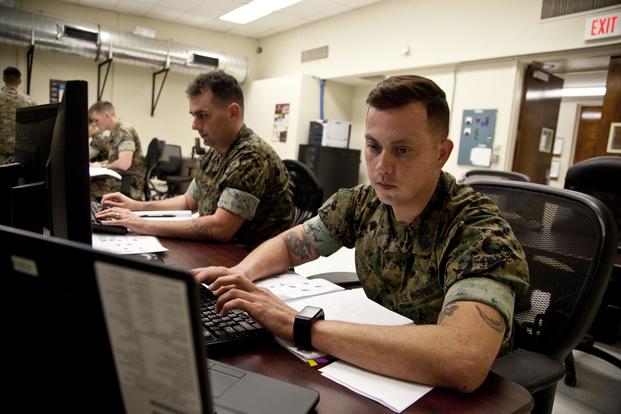 The Marine Corps is aggressively trying to recruit cyber talent.

Beginning in October, all enlisted Marine applicants will be given a cyber test while at a military entrance processing station, according to Capt. Alex Ryan, operations analyst for manpower studies and analysis branch at Manpower and Reserve Affairs. Officer candidates won’t be administered the test.

Ryan said that the test doesn’t change the process of classifying occupational specialties, but, rather, provides another tool for better talent management.

Those in other work roles that aren’t cyber-related but that do well on the test could be eligible to move into the newly established cyberspace operations occupational field using the normal processes that allow for lateral moves, Ryan said.

This new field will utilize the test to screen applicants, and other occupational fields — such as communications, signals intelligence and ground electronic warfare — have expressed interest in leveraging the test in the future to judge potential in other technology-intensive fields.

The test was initially designed by the Air Force for joint use to predict training performance in entry-level cyber-related fields. It includes questions in four categories: networking and communications; computer operations; security and compliance; and software programming and web design.

Looking to reinforce its posture in an increasingly modern battlefield, the Marine Corps requested 1,000 billets related to cyber / electronic warfare / information operations in the most recent budget.

In addition, the commandant of the Marine Corps recently approved growth for Marine Corps Cyberspace Command.

MARFORCYBER will get around 40 percent of new career field designees to work on the defensive side with just a couple going to the offensive teams.

Maj. Gen. Lori Reynolds, commander of Marine Corps Forces Cyberspace Command, said her force doesn’t have the depth to do what the Army is doing in experimenting with integrated offensive and defensive cyber effects at the tactical edge with full brigades.

This is one of the reasons the commandant approved expansion at MARFORCYBER, Reynolds told Fifth Domain following her appearance on an AFCEA-hosted panel in early April.

Moreover, the Marine Corps created a cyber career field earlier this year and requested 1,000 billets related to cyber/electronic warfare/information operations in the most recent budget to be better postured to fight and win in an increasingly modern battlefield.

MARFORCYBER will get around 40 percent of new career field designees to work on the defensive side with just a couple going to the offensive teams, Reynolds said.

The Marines have recognized that cyber is going to be a foundational capability in the future with some ingrained organizational structure behind it.

“We just really have to get more return on investment … and what we want to be able to do is continue to increase our proficiency and skills,” Reynolds said. “When you’re constantly moving people out of the cyber workforce, you’re starting over again all the time. That doesn’t work.”

Currently, the Marines deployed on the cyber mission force — a joint force that makes up U.S. Cyber Command’s cyber warrior cadre — are lateral moves, Reynolds said, or they’re working as signals intelligence Marines and they’re just in and out of cyber.

While the total number of forces on the CMF will stay the same, the types of Marines filling those roles will change, a MARFORCYBER spokeswoman told Fifth Domain. When a communication officer currently working on a team rotates, that billet will be coded as a cyberspace officer and will be filled only by someone in the new cyber career field, they added.

The model going forward should be building a “foundation from the ground up of defensive cyber and then maybe start building some of our offensive capability from the defense while we’re still flowing SIGINT through the offensive teams,” Reynolds said.

This move comes as the Marines, as well as the other services, are going through a bit of a culture shock when it comes to introducing these nontraditional skill sets into the ranks.

“I think the commandant is willing to challenge every assumption we’ve ever made about how we treat these MOS,” Reynolds said.

In fact, during recent congressional testimony, Reynolds noted that the commandant often points out “we may end up with a platoon of warrant officers, and that’s got to be okay with us.”