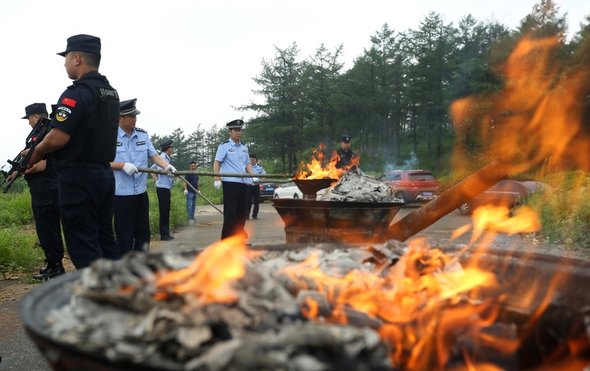 Privacy concerns, cultural differences fuel skepticism about this approach in other settings

Dozens of cities across China are applying an unusual forensic technique to monitor illegal drug use: chemically analysing sewage for traces of drugs, or their telltale metabolites, excreted in urine.

One southern city, Zhongshan, a drug hotspot, is also monitoring waste water to evaluate the effectiveness of its drug-reduction programmes, says Li Xiqing, an environmental chemist at Peking University in Beijing who is working with police in these cities.

Li says Zhongshan police have already used the technique to help track down and arrest a drug manufacturer. He says a handful of cities are planning to use data from waste water to set targets for police arrests of drug users, some as early as next year.

Although illegal drug use has been monitored through wastewater-based epidemiology (WBE) in other countries, including Belgium, the Netherlands, Spain and Germany, most studies have collected data for epidemiological research rather than for setting policies. “The noteworthy part is that China seems to be actually acting on the technique,” says Daniel Burgard, a chemist at the University of Puget Sound in Tacoma, Washington.

Last month, Chinese President Xi Jinping said that the country’s war on drugs was tied to national security and the welfare of the Chinese people. Li says the central and local governments will invest at least 10 million yuan (US$1.5 million) in WBE monitoring by the end of the year. He expects the figure to at least double annually for the next few years.

Li is pushing for the method to be used internationally, including as part of the United Nations’ drug control policies. “The experience and lessons from the application of WBE and its adoption by the Chinese drug police in their daily management will be very relevant for other countries,” he argues.

But many issues, such as how police should be allowed to analyse the data, safeguards to prevent the data from being misused and privacy concerns, need to be ironed out. Some researchers are sceptical that the method will be adopted successfully in other countries.

To show that WBE reflects drug use in the community, a number of studies have compared drug levels detected in sewage with other data sources on drug use, such as the amount of drugs seized by police and user surveys. A 2016 study in eight European cities found a strong correlation between the amount of cocaine detected in waste water and data from drug seizures. However, in the case of metamphetamines the correlation was not as strong.

Researchers around the world generally agree that WBE can reliably estimate drug use, says Shane Neilson, the head of Determination for High Risk and Emerging Drugs at the Australian Criminal Intelligence Commission in Canberra. “The science and findings are globally consistent and comparable,” he says. The technique is also used by health researchers to detect other substances excreted by humans, such as bacteria and viruses.

Zhang Lei, an environmental policy researcher at Renmin University in Beijing and a collaborator with Li, notes that WBE studies are a more objective way of measuring whether government initiatives to reduce drug use in the community are working. She says that solely relying on traditional methods of monitoring changes in drug use, such as the number of arrests of users or the number of drugs being seized by police, can be misleading because they are indirect measures. “WBE offers an unequivocal measure of the effectiveness of efforts,” says Zhang.

Li and his team put this to the test when they measured two popular synthetic drugs, methamphetamine and ketamine, in waste water across China two years after local and national agencies launched campaigns to crack down on drug use and manufacturing in 2013. Zhang’s team found that following these initiatives, methamphetamine use dropped by 42% and ketamine use decreased by 67%. Li thinks the drop in drug use is a result of police campaigns.

Jose Antonio Baz Lomba, a researcher at the Norwegian Institute for Water Research in Oslo, says the growing evidence that the technology is a reliable measure of drug use should encourage other international police authorities to take WBE seriously and start collaborating with researchers.

But Carsten Prasse, an environmental health researcher at Johns Hopkins University in Baltimore, Maryland, argues that cultural and political differences between countries will have a substantial effect on this research. “In China, the general population is used to following the directions given by the government, and privacy related issues don’t seem to be a major concern — the situation is totally different in the United States,” he says.

Prasse says the potential implementation of wastewater-based drug monitoring needs to be discussed in the community, not only between scientists and law enforcement. “WBE represents a powerful new tool to assess drug consumption in our cities, but there is still a lot of work to do before it can be implemented on a larger scale,” he says.