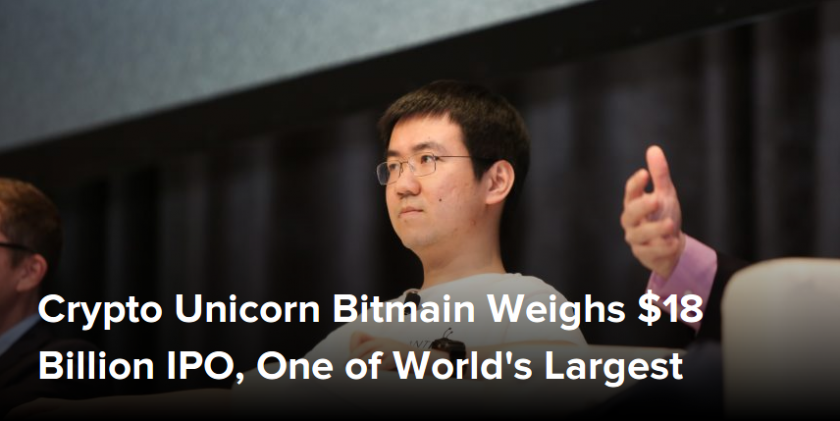 (LOL, and Hedgefund Elliott told me once, it is “too small” for them – see below)

Bitmain Technologies, Ltd. is about to go public.

According to documents obtained by CoinDesk, the cryptocurrency mining company is filing for an initial public offering (IPO) potentially as high as $18 billion this September at a market capitalization of $40 to $50 billion. It will be underwritten by China International Capital Corporation and listed on the Hong Kong Stock Exchange in Q4 2018 or Q1 2019 amid a wave of Chinese unicorns hitting the public markets, including bitcoin mining competitors Canaan Creative and Ebang Communication.

Now, a possible $18 billion IPO sticker price positions Bitmain to displace social media giant Facebook as one of the largest public offerings in history. SoftBank Group and Tencent Music are expected to top Alibaba and Spotify for the number one and two IPOs of all-time in the same fiscal period.

Before this latest funding, Sequoia Capital China had led Bitmain’s $50 million Series A and $400 million Series B rounds with the help of San Francisco’s IDG Capital, Menlo Park’s Coatue Management, Russia’s DST Global and Singapore’s EDBI and GIC. The Series A round accounted for 5 percent of shares at a post-mortem valuation of $1 billion and the Series B round valued the company at $12 billion.

Projected share price and volume are not disclosed, but investment banks close to the IPO are calculating the P/E ratio to be 20 within the first publicly traded year.

With the IPO, the co-founders’ combined holdings could amount to roughly $30 billion, assuming they have retained 60 percent of the company together, per a January 2018 Bloomberg interview.

In addition to income generated by hardware costs and pool transaction fees, Bitmain oversees its own international mining operation and has made $1 billion, $11 billion and $10 billion off of its 2016, 2017 and 2018 Q1 bitcoin holdings, respectively, revealed to the public for the first time here.

Some of the funds have been set aside to back up to 30 blockchain companies for a blockchain research division, which shouldered blockchain data analytics service Blocktrail as early as 2016.

Outside investments are said to represent a broader effort to turn Bitmain into a digital currency infrastructure conglomerate, and this has appeared to be increasingly true in recent months.

Bitmain is also using these technologies to build a wallet, exchange and trading platform that will facilitate the bitcoin cash ecosystem, a spin-off of the original bitcoin cryptocurrency that is seen as a likely breadwinner. The investor prospectus says Bitmain is “strategically developing” bitcoin cash by mining, investing and trading the coin and its peripheral technologies for the purpose of realizing substantial returns down the line.

The day before yesterday, Bitmain disclosed an investment in tribeOS, a bitcoin cash advertising network.

In 2013, the Bitmain graphics chip progenitor BM1380 utilized the 55-nanometer process, a mode of circuit dimensionality considered to be the most cutting-edge at the time. The company then shuffled through the 28-nanometer BM1382, BM1384 and BM1385 chips from 2014 to 2015, before advancing to the 16-nanometer BM1387 chip in 2016 to keep up with the competition.

Today, the older generation of chip makers has been struggling to play catch-up. Bitmain has surpassed Spreadtrum Communications, a 17-year-old company, as the second largest integrated circuit design maker in China, according to the investor prospectus.

In half a decade, Bitmain has captured 8 percent of the domestic chip design market where Huawei HiSilicon has taken 14 years to achieve 17 percent. At this rate, Bitmain could near or overcome Huawei HiSilicon’s local stronghold very soon and, as the investor prospectus suggests, go head-to-head with the U.S. chip industry.

The Chinese market is already nudging out the American market within the worldwide chip economy, although Intel continues to lead the pack.

Silicon Valley has felt the pressure. It was reported back in February that Bitmain was as profitable as 24-year-old Nvidia, which had its stock price target lowered along with AMD’s in April.

Analysts pointed to a likely drop-off in Nvidia and AMD chip orders due to an upcoming Bitmain ethereum mining rig. They feared cryptocurrency miners would be less inclined to purchase from Nvidia and AMD because Bitmain would outperform them at a lower cost. Ethereum had been the last major cryptocurrency to be untouched by the Chinese company’s ASICs.

Still, U.S. chip makers have not been worried. AMD, 32 years Nvidia’s senior, has assured investors that personal computers, gaming and data centers will sustain the business, with or without cryptocurrencies.

But the logic applies both ways. When almost every electronic device imaginable is powered by a graphics chip, making ends meet outside of cryptocurrencies is an opportunity for Bitmain as well, and the geopolitical incentive in China is stronger than ever.

Bitmain seems to be entirely aware of this fact. The investor prospectus outlines ambitions to enter into other technology fields, in part to “cope with the Chinese government’s ban on ICOs, cryptocurrencies and mining activities,” and in part to grow the company into a supercomputing titan with artificial intelligence.

An in-house artificial intelligence arm is predicted to generate 40 percent of revenue in the next 5 years for this reason. Bitmain is betting that neural network machine learning methods will heighten processing capacity in graphics chips for cryptocurrency and non-cryptocurrency applications alike, as with the BM1680 processor-based tensor computing card, deep learning accelerating card and intelligent server unit.

Bitmain claims testing has even shown that its AI chips have stacked up against the computing power found in Google’s corresponding AI products.

With a team of “nearly 500 people” working on “R&D, platform architecture, algorithm development, software and hardware development,” Bitmain has rapidly drawn on new and existing research from academic institutions and technology companies to pioneer artificially intelligent software and hardware, well beyond the scope of cryptocurrency mining tools.

Right now, the first move is robotics: the acquisition of smart robotics company Luobetec and the production of the Luo Xiaodou robotic pet.

Hedgefund ELLIOTT (website – Wikipedia) passed on building 7nm Blockchain machines, superior to Bitmain’s, at the time – still makes me chuckle today, especially in light of big IPOs and ICOs in that space :) 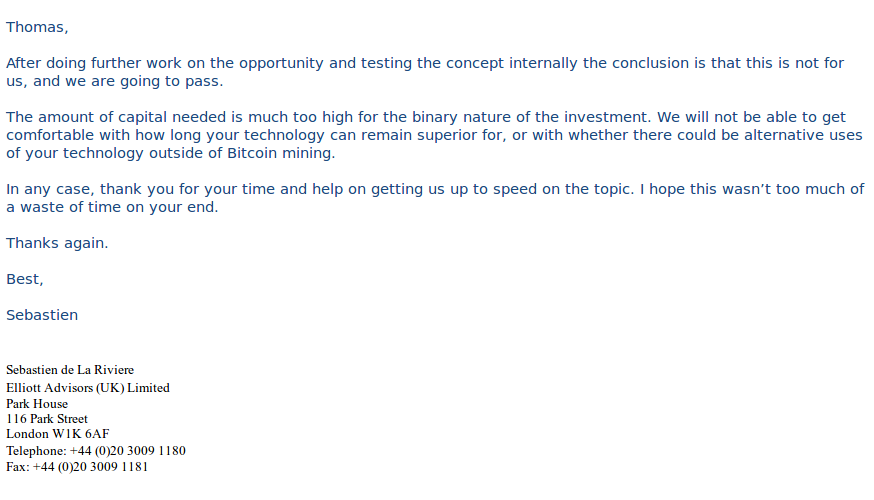 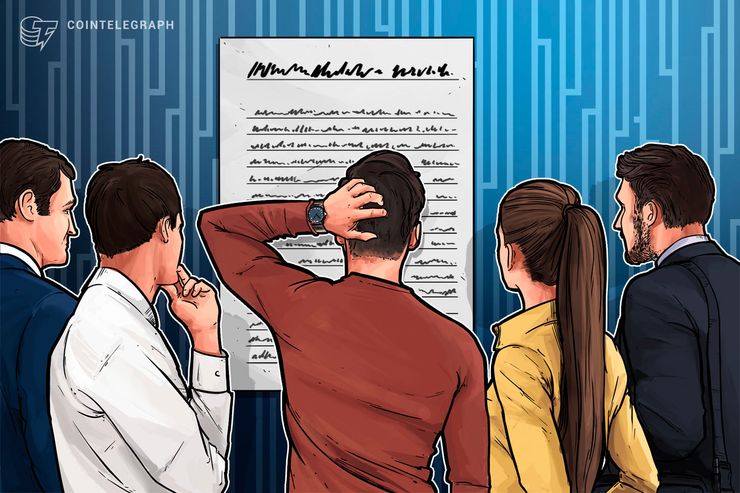 In a Bitmain pre-IPO investor deck acquired by Cointelegraph, DST Global is listed as an investor, with claims that the investment is “recently completed.” 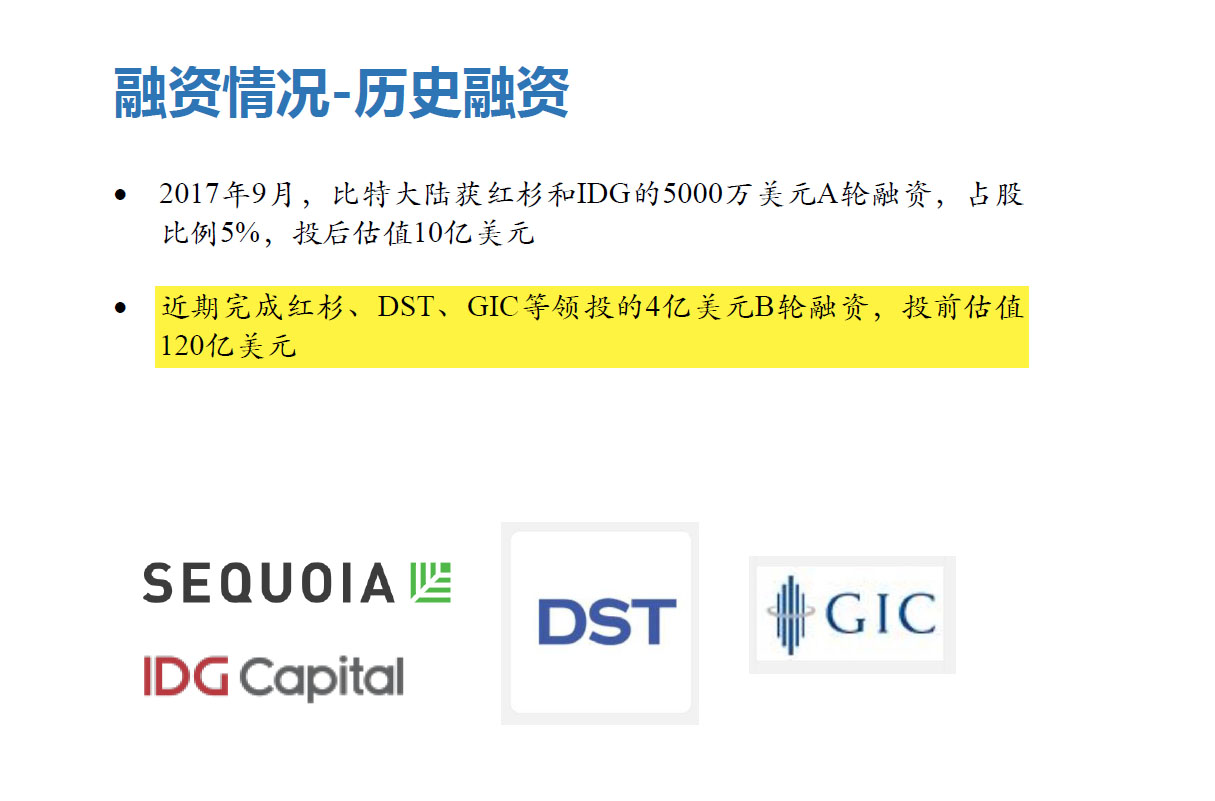 Henry Wu, a lawyer and legal expert at Chinese law firm L&Y Law Office, spoke with Cointelegraph, explaining that the document’s wording in the original Chinese is left vague. While it is possible to dispute the meaning, to the layperson or an uninitiated potential investor, the language would suggest Bitmain has acquired funds from DST Global.

Earlier today, John Lindfors, a managing partner at DST Global, said in an email to Cointelegraph that he “can confirm that DST has never invested in Bitmain.”

Wu said that if an investor used the information that DST Global invested in Bitmain to decide whether to contribute their own funds, it could compel them to ask for a reimbursement. If Bitmain refused, investors could commence legal proceedings.

Bitmain closed its pre-IPO funding round earlier this month, claiming participation of high-profile investors like Chinese tech conglomerate Tencent and Japan’s SoftBank, that owns a 15 percent stake in Uber.

Last week, SoftBank told Cointelegraph that reports of it backing Bitmain’s IPO were also false. A spokesperson said that “neither the SoftBank Group Corp. nor the SoftBank Vision Fund were in any way involved in the deal.” 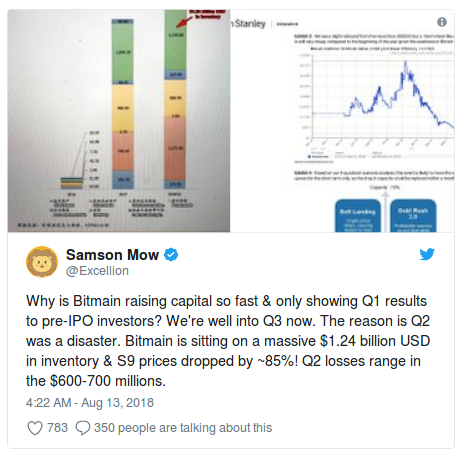 “If $BTC prices stay same, Bitmain will continue bleeding as they went ALL IN ordering massive amount of wafers from TSMC. You don’t become a top 5 global customer of TSMC with smaller orders. Pre-IPO investors should push them to disclose their Q2 numbers immediately.” 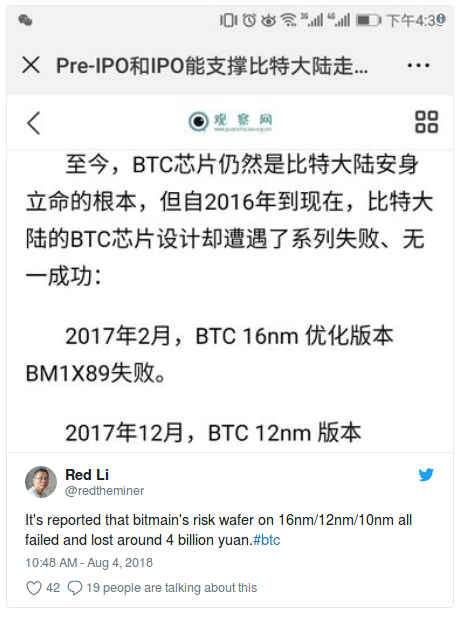 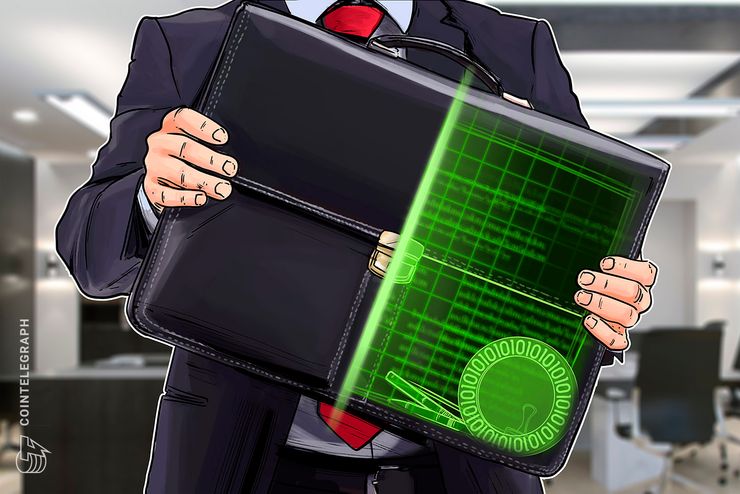 Last month, media reported that Temasek was one of the key investors in the Bitmain pre-IPO funding round. The investment firm’s commitments for the pre-IPO allegedly totalled $560 million. In response to the reports, Temasek stated:

“We’ve seen commentary about an IPO involving a cryptocurrency company, Bitmain. Temasek is not an investor in Bitmain, and has never had discussions with, or an investment in Bitmain. News reports about our involvement in their IPO are false.”

As previously reported, Bitmain made claims to high-profile investors in its pre-IPO, claiming a $15 billion valuation in the beginning of August. The deal allegedly included participation of high-profile investors like Chinese tech conglomerate Tencent, investment firm DST Global, and Japan’s SoftBank, which owns a 15 percent stake in Uber.

Despite statements to the contrary from DST global, verbiage in Bitmain’s pre-IPO investor deck suggests that investment from DST was “recently completed.” The document’s wording in the original Chinese is vague, making it possible to dispute the meaning. However, to the layperson or an uninitiated potential investor, the language would suggest that Bitmain had acquired funds from DST Global.

According to a Hong Kong news outlet AAStocks, Tencent also did not invest in Bitmain. Despite numerous requests for clarification, no one at Tencent has denied nor confirmed the investment to Cointelegraph.