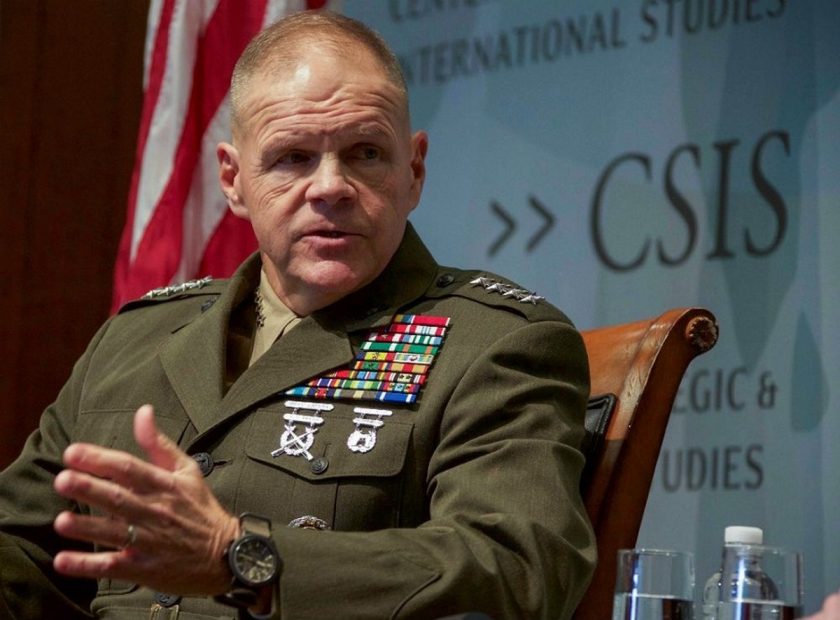 Commandant of the Marine Corps Gen. Robert B. Neller
called for a futuristic vision of the service that embraces digital fighting.
(Sgt. Olivia G. Ortiz/Marine Corps)

The Marine Corps (USMC) must be “more flexible” when it comes to retaining cyber warriors, its top officer said, a recognition that the service needs to bolster its recruiting effort for the digital fight.

“If you get qualified as a cyber Marine, you ain’t ever leaving, unless you want to. If you want to stay there and do ones and zeros” that’s fine, Neller said.

The recruitment effort laid out during the 69th Current Strategy Forum at the U.S. Naval War College in Newport, R.I. was part of a futuristic vision for the Marines that embraced digital war-fighting. The speech served as a rejection a force that will rely solely on bullets and bombs. Instead, he highlighted a Marine Corps that will also battle in ones and zeroes. He portrayed the Corps as in the middle of a digital battle, “in phase 2.5 against potential countries and adversaries,” an apparent reference to different stages of combat.

“Every infantry squad in the Marine Corps is going to fly their own quad-copter and their own UAV,” Neller said, using an acronym for unmanned aerial vehicles.

It was a strategy speech that at times crossed over into the realm of popular culture. Neller asked listeners to remember the 2018 Winter Olympics opening ceremony that featured more than 500 automated drones flying in unison. Imagine those same drones but armed. “What happens if 500 mini-drones all weaponized come ‘zorching’ out of the sky, what are you going to do to shoot them down?” Neller asked.

Beyond defeating UAV attacks, Neller said that the Corps is “looking at autonomous ways to resupply ourselves. We are looking at pallets that fly.”

He appeared frustrated at the Marine’s acquisition process and acted out a more aggressive negotiation process that he has with defense contractors. When meeting with a vendor selling drones or a piece of equipment that he hopes to stock for the Corps of the future, Neller may ask them if they use 3D printing for their products.

“Oh yeah,” the vendor will typically say, according to Neller.

“Then why aren’t I printing it? Why am I paying you if I can print it?” Neller will respond, pushing the contractor about why their equipment is needlessly expensive. “I’ll pay you for the tech data package. I’ll pay you for the rights because that’s your intellectual property. But I don’t want the parts from you.”

Neller admitted his response does not always sit well with the high-powered defense contractors with dollar signs in their eyes.

“The room gets real quiet,” he said.

“Sadly, I don’t see us doing a whole lot to contest that. (The Chinese) are out there putting their marbles down, and we’ve got no marbles,” Neller said, an anecdote for how China is gobbling up territory in the ocean. “We’ve got old marbles, but pretty soon there isn’t going to be a place to put down marbles if they don’t start doing something.”

The Corps is being forced to ground commercial drones it has been fielding to infantry units because of a recent Department of Defense policy memo.

The policy memo, released at the end of May and signed by Deputy Secretary of Defense Patrick Shanahan, bans the purchase and use of commercial off-the-shelf, or COTS, drones, citing cybersecurity concerns.

“The DoD Inspector General found that the DoD has not implemented an adequate process to assess cybersecurity risks associated with using commercial-off-the-shelf (COTS) Unmanned Aerial Systems,” the memo reads.

The Corps has been rapidly issuing small Instant Eye quadcopters to every rifle squad as part of a program called ‘Quads for Squads.’

To date, the Corps has given out roughly 600 of the small tactical drones and another 200 are pending, Capt. Pena, a Marine spokesman, told Marine Corps Times.

Those drones are now grounded “until the DoD identifies and fields a solution to mitigate known cybersecurity risks,” the memo states.

The Corps plans to submit a waiver “requesting an exemption,” Pena added.

However, Shanahan is the only authority authorized to approve exemptions and any waivers will be reviewed on a “case by case basis, to support urgent needs,” according to the memo.

The recent DoD memo will not interrupt the shipping of the remaining drones, Pena added.

The Commandant of the Marine Corps Gen. Robert B. Neller has been pushing to equip grunts with the small drones to aid in battlefield situational awareness.

And recently, the top Marine cut the size of the Marine rifle squad from 13 to 12 while also adding a new drone systems operator role.

The grounding of the Marine drones was first reported by Military.com.