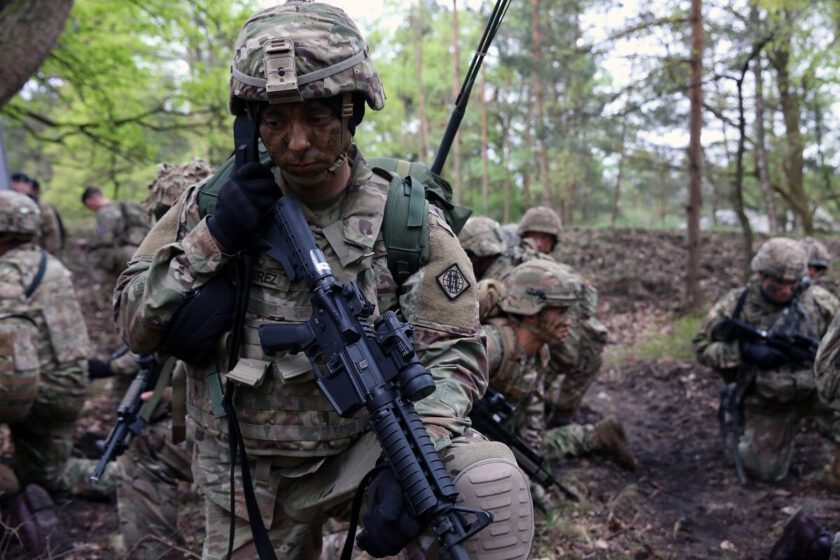 ABERDEEN PROVING GROUND, Md. — The U.S. Army is moving forward on a number of projects to bolster its tactical network, thanks to a new pool of money dedicated to prototyping and maturing emerging technology.

Additions to the Army’s tactical network will come every two years as part of modernization efforts called capability sets. Previously, prototypes of emerging technology would fall into the “valley of death,” where technology projects that didn’t have enough funding to transition into programs of record would die, said Maj. Gen. Peter Gallagher, director of the Army’s Network Cross-Functional Team.

The CFT received nearly $30 million to support prototyping efforts for science and technology efforts as well as industry work in fiscal 2020, according to Justine Ruggio, communications director for the CFT.

The Army is particularly interested in low-Earth orbit satellite constellations to improve bandwidth and reduce latency for Capability Set ’23 and Capability Set ’25, said Michael Breckenridge, acting associate director for the Office of Science and Technology. His office falls under the purview of the Army’s Combat Capabilities Development Command C5ISR (Command, Control, Communication, Computers, Cyber, Surveillance, and Reconnaissance) Center. The S&T team is researching how the service can move and secure traffic through these constellations.

“While those are very much in their infancy as far as the commercial LEO constellations coming together, we’re already working with those vendors to try and get satellite time to be able to do experimentation to understand the capability and how do we shape, then, future investments in that space,” Breckenridge said.

The Network CFT is also excited about the survivability and mobility of the Army’s command posts, said Donald Coulter, senior S&T adviser for the CFT. It’s also focused on spectrum obfuscation capabilities as well as an identity management project that explores new ways of verifying users’ identities (for example, through wearables) to ensure the security of Army systems if equipment falls into enemy hands, he added.

The S&T community and the CFT are also working on a secure communications link between manned and unmanned fighting vehicles, something that may be used for other parts of the network, Breckenridge said. For example, the C5ISR Center is also experimenting with that link for distributed command post nodes and between command post links, he noted.

Previously, a lack of funds made it difficult to create an “entire road map to field” prototypes, he added, and teamwork between the network team and S&T community suffered. But with the newly allocated funds, the S&T community and the Network CFT are able to work more closely.

The dollars have been “the key to have the groups from across all those different communities come together focusing on what specifically we need to take viable concepts and promising concepts from idea to demonstration to real … tangible and robust thing[s] that we can acquire and field,” said Coulter.

With the prototyping dollars now in place, the CFT is expected to have an easier time developing technologies for the service’s network modernization plan, driven by capability sets. Capability Set ’21, which completed critical design review in April, is focused on addressing immediate gaps in the Army’s network with currently available technologies. The Army has begun buying those new network tools, which focus on smaller, lighter, faster communication systems for soldiers, and will begin fielding the technology in fiscal 2021.

Meanwhile, Capability Set ’23, which has preliminary design review scheduled for April next year, is focused on high-capacity, low-latency communications that aren’t mature enough today, Gallagher said at the C4ISRNET Conference in May. Future capability sets will include emerging technologies that improve network resiliency. For example, after Capability Set ’23, soldiers will have more bandwidth at the tactical edge, allowing for the increased adoption of machine learning and other emerging technologies. The Army is also in the planning stages of Capability Set ’25.

Even as the Army identifies key technologies for future capability sets, it must work within the constraints of budgets, meaning that the Network CFT and the C5ISR Center have to work together to identify S&T priorities. Coulter said the “key thing” that the CFT does is prioritize its portfolio and provide guidance on critical capability gaps.

Breckenridge said the S&T community brings an understanding of adversarial threats to the network and what investments can be made to mitigate those threats to inform the CFT’s prioritization.

“One of the key things that S&T community does is … identify those opportunities,” Coulter said. “So we’re threat-informed and -aware, but we also are looking from a technology perspective of where can we get the leap-ahead opportunities that can impose challenges to our adversaries and take our network to the next level. So we have to rely on them heavily, not only for some threat information, but also … those unique potential opportunities from a technology perspective as well.”