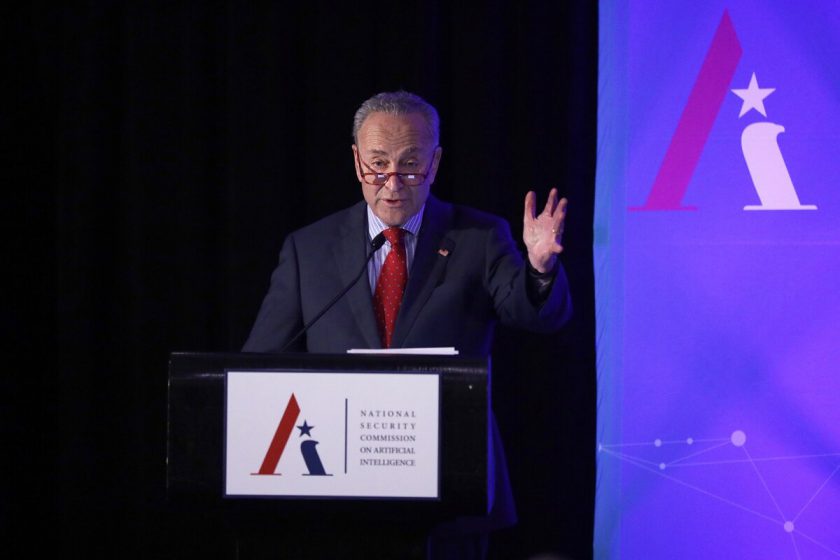 WASHINGTON ― With an eye on China, the U.S. Senate’s top Democrat is floating plans for a new, deep-pocketed agency to invest $100 billion into cutting-edge technologies like artificial intelligence, quantum computing, robotics and fifth-generation networking known as 5G.

Speaking at a conference of the National Security Commission on Artificial Intellgence on Tuesday, Senate Minority Leader Chuck Schumer, D-N.Y., floated his plans for a new technology-focused subsidiary of the National Science Foundation, which would work with the Defense Advanced Research Projects Agency (DARPA), which would be the foundation’s analogue within the Defense Department.

The proposed agency would invest $100 billion over five years into universities, companies or other specialized government agencies “in the Defense Department or not,” as well as individual academic researchers, Schumer explained.

To become law, the idea would have to pass Congress and get the president’s signature. According to Schumer, his “discussion draft” has support from people close to President Donald Trump and Senate Majority Leader Mitch McConnell, R-Ky., but it’s “thus far been unable to get their full-throated support.”

The comments come as the National Security Commission on Artificial Intelligence — chartered by Congress and led by Eric Schmidt, the former head of Google parent Alphabet, and Bob Work, the former deputy secretary of defense — warned there’s too much red tape and not enough federal investment in research and development funding for computer science.

“The kind of research that needs to be done would have a long revenue stream,” Schumer said. “We will do better than the Chinese government, dollar-for-dollar, in investing in AI, but if they outspend us 3-, 4-, 5-to-1 ― which they are doing now ― we’ll fall behind in five or 10 years and rue the day.”

Invoking the space race of the 1960s, Schumer stressed that America must lead in AI innovation, particularly in comparison to China, which he said runs an oppressive surveillance state. America’s top spot, he added, would to promote a future of privacy rights, individual liberty and democratic values.

“We need to match and exceed their level of commitment,” Schumer said of China, “which thus far we have not done.”