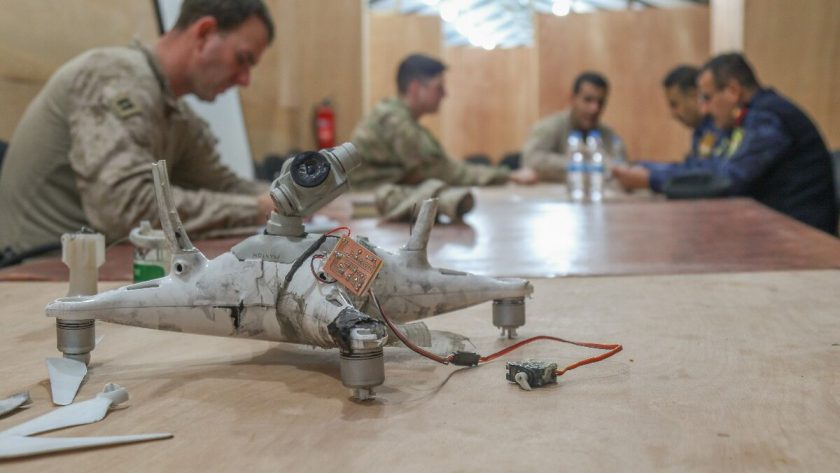 Videos from battlefields in Iraq, Syria and Ukraine have shown the potential havoc that small drones can bring to unsuspecting ground forces, including scouting for call-for-fire missions and dropping grenades on exposed positions.

U.S. troops are already deploying abroad with counter-drone capabilities, including CACI International’s SkyTracker suite, according to company officials at this year’s Association of the U.S. Army conference in Washington, D.C.

“We have many contracts with DoD, IC [intelligence community], federal law enforcement customers,” said Carl Boggs, CACI SkyTracker’s program director. “One thing that we do, which I do think is a discriminator from other types of systems, is we can find the actual ground control system or the radio operator.”

The core of SkyTracker is radio frequency detection and mitigation. It identifies the link between a drone and its controller.

Those positions can then populate on a user interface screen, like the portable tablets already used in the field by many troops. The tracker identifies what type of drone is being used and offers options to do anything from jamming its communication to forcing it to the ground.

The platform has been deployed outside the continental United States in operational environments with U.S. military personnel, but Boggs couldn’t disclose the units or locations.

SkyTracker also has a “safe landing zone” option, where an enemy drone is given coordinates to land at safely.

“We’re actually able to tell the drone, ‘go to these coordinates,'” he added. “If it does have ordnance, that allows us to safely control it, or to actually [find] the drone to get information from it.”

All three of SkyTracker’s platforms have demonstrated the ability to counter drone swarms in different configurations.

“Defining swarm is something that’s difficult … but last month we demonstrated in a DoD-sponsored experiment that we were able to mitigate against multi-target, multi-access threats from Group 1 and 2 drones,” Boggs said.

“We are able to get in and only impact a very specific drone,” he added. “We’ve had multiple tests where we’ve had three or four platforms in the air that are the same type and we’ve demonstrated that we can pinpoint mitigate a specific threat.”

SkyTracker works on Group 1 and 2 drones, meaning ones that weigh up to about 55 pounds and fly below 3,500 feet above ground-level. This drone category includes U.S. military aircraft like the ScanEagle and the RQ-11 Raven, as well as most commercial drones.

Boggs said that SkyTracker can move to higher drone categories, but Group 1 and 2 are what most customers are looking to counter these days.

SkyTracker’s three-pound man-packable attack system has a rough range of one to three kilometers and a battery life that fluctuates depending on activity, but can reach up to six hours.

SkyTracker’s AWAIR system can be loaded on gun trucks or low-visibility vehicles and has a range that averages about five kilometers. SkyTacker’s fixed-site system has a range of 10 kilometers or more.