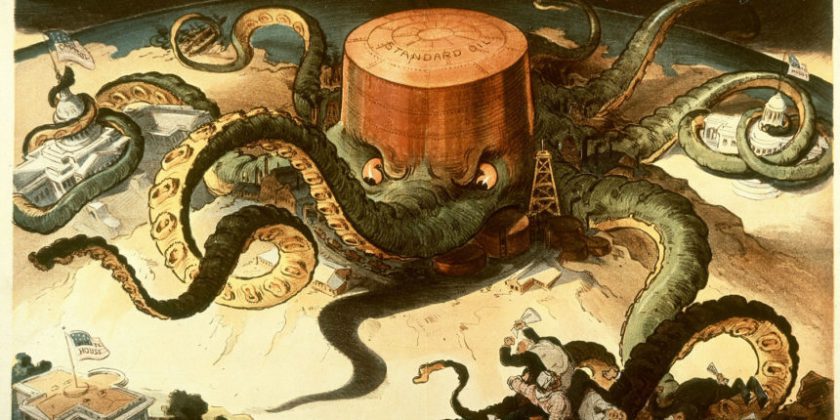 Standard Oil depicted as an Octopus in a 1904 political cartoon
(image via Wikimedia Commons).

Author Scott A. Shay is co-founder and chairman of Signature Bank of New York and also the author of “In Good Faith: Questioning Religion and Atheism” (Post Hill Press, 2018).

Allowing Facebook to mint its own coin, the Libra, would turn it into the greatest anti-competitive trust case in history. It would make the early 20th century Morgans or Rockefellers seem downright competitive.

Even before it unveiled its vision for a global cryptocurrency this month, Facebook was already a near-monopoly in social media, and part of a duopoly in its main markets. Together with Google, it controls 82% of the digital advertising market.

In the past, Facebook has purchased any company that threatened it, e.g. Instagram and WhatsApp. And, when it spots a company that won’t sell itself or would be difficult to purchase, it uses the “embrace, enhance and extinguish” technique.

Facebook saw Snap Inc. (maker of Snapchat) contesting a small part of its franchise, so it embraced Snap’s best features and integrated them into its app. Now, Facebook is hoping to extinguish Snap as a competitor. Compare the stock performance of Snap and Facebook, and you will probably place your bet on Facebook.

But it is not simply Facebook’s business practices that are of concern.

Neither Facebook nor Google charges for their consumer products, obscuring the fact that all-encompassing consumer tracking is their real product. In many cases, their data is better than what the KGB or CIA could have gathered 20 years ago. And their data is certainly a lot cheaper, since it is voluntarily provided and easily accessible.

We would not want our government agencies to have this sort of power, nor should we want it to be in the hands of corporations.

Facebook and Google have already shown their political muscle. With their duopoly on digital marketing advertising, these companies have transformed the nature of news.  Only a few news sites, such as The Wall Street Journal and The New York Times, can resist their gravitational pull and still attract direct advertisers as well as subscribers.

Most other publications must use Google ads, which provide far less revenue to the outlet, slice and dice their readership, and force newspapers to write clickbait. Ads to readers are so well-placed because of the mountain of information that can be inputted into their algorithms. The same holds true for news content viewed on Facebook.

Now, with the Libra project, Facebook wants to exponentially increase its monopolistic power by accessing unparalleled information about our consumer purchasing habits. If allowed to proceed with Libra, a company that knows your every mood and virtually controls the news you see will also have access to the deepest insights into your spending patterns.

Of course, Facebook will speak piously about privacy controls and its concern for the consumer, yet it will still figure out a way to sell the data or others who buy the data will figure it out for them.

Furthermore, with the richness of the social media data Facebook consistently garners, even anonymized data can be recalibrated to distill specific individual-related information and preferences. Facebook, along with its other monopolist rent-seeking cohorts, such as eBay, Uber and Mastercard, all say they won’t do that.

Quite frankly, there is zero reason to believe such promises. Their culture is based strictly on brand concerns and access to personal data. Additionally, hacks of social media are now so common that we are inured to them.

Consumers can have the benefit of a digital payment mechanism without allowing Facebook to gain more power. In the financial services sector, my institution, Signature Bank, was the first to introduce a 24/7 blockchain-enabled payment system. As one would expect, others, such as JPMorgan, are trying to follow suit and will no doubt be competitors someday.

Banks and financial institutions are limited in their access to, and transmission of, information, and for good reason. If Facebook, on the other hand, establishes Libra, no other competitor will have equal access to its data, and therefore, a chance at the consumer payment market.

In this way, Libra is in keeping with Facebook’s monopolistic business style.

Further, the information monopoly Facebook would possess will be similar to what the Chinese government possesses but needs the Great Firewall to execute. Monopolistic forces will produce the same result through different means.

Action needs to be taken quickly to stop Libra and break up Big Tech, not only for the welfare of consumers but for the good of the nation.

Facebook also must be mandated to offer a parallel, ad-free, “no collection of information” site supported by fee-based subscriptions. Over time, this would provide some transparency as to the value of the consumer information currently being gifted to Facebook.

Google should be forced to divest or spin off YouTube, Double Click and other advertising entities, cloud services and Android. Amazon similarly needs a radical breakup as it too poses systemic threats to a transparent market. (Alexa is a prime example of the private data Amazon gathers on users’ lifestyle and personal habits.)

The breakup of these behemoths cannot wait until after the 2020 election.  Such action must be taken on a bipartisan basis as soon as possible.

Even once stripped down, Facebook should remain separated from commerce due to privacy concerns. Congress, which has scheduled hearings on Libra for next month, is right to intervene.