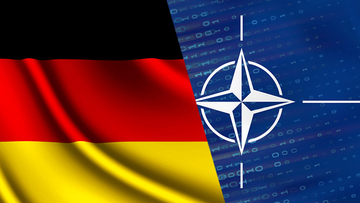 [This is just a log of the news by AFP]

Germany is to join the ranks of NATO countries making its cyber warfare skills available to the alliance to help fight hacking and electronic warfare, officials said on Thursday.

NATO has designated cyberspace as a conflict domain alongside land, sea and air and says electronic attacks by the likes of Russia and China — but also criminals and so-called “hacktivists” — are becoming more frequent and more destructive.

German officials used a meeting of defence ministers in Brussels on Thursday to tell allies that Berlin would make its cyber capabilities available, including offensive elements.

“Just as we provide army, air force and naval forces to NATO, we are now also in a position to provide NATO capabilities on the issue of cyber within the national and legal framework that we have,” German Defence Minister Ursula von der Leyen said.

The US, Britain, Denmark, the Netherlands and Estonia have all made their offensive cyber weapons available to the alliance — and announced it publicly — in the expectation that the threat of counterattack may deter would-be aggressors.

As with other military resources such as tanks and jets, alliance members retain control over their cyber capabilities and make them available to NATO when requested for missions and operations.

Targets for offensive cyber tactics can include anything with an internet connection, including computers and smartphones, right up to devices which control key machinery at power plants and transport networks.

Russia is seen by the West as the biggest cyber threat after a string of attacks blamed on the Kremlin on targets including world sports bodies, the US Democratic Party and the world chemical weapons watchdog in the Netherlands.

In a sign of the growing importance NATO countries attach to the cyber battlefield, this year Britain said it would spend 65 million pounds (74 million euros/$83 million) on offensive capabilities.