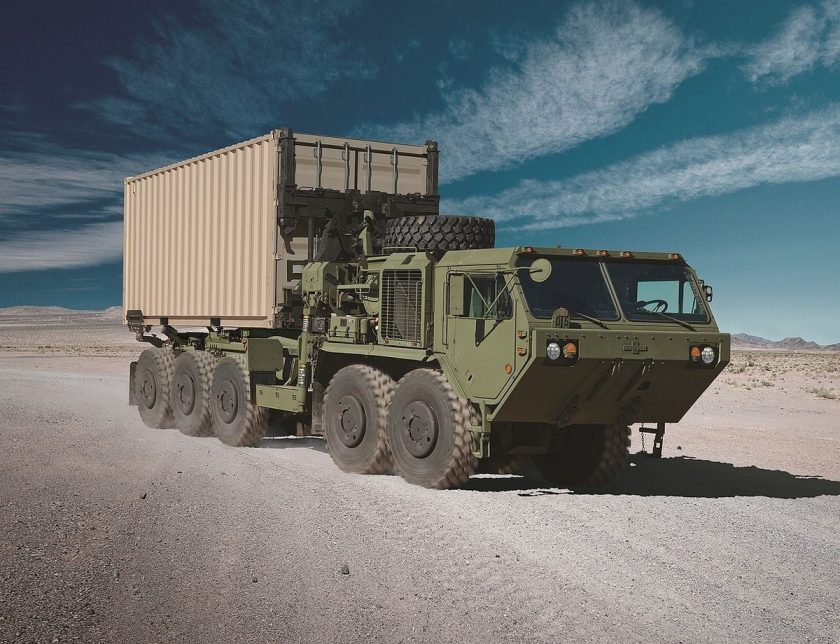 “shifting the grunt work from the grunts to machines”
By adding autonomous features, cargo vehicles like this
could carry out the same mission without need for human occupants.
(Oshkosh Defense)

Simple subtraction explains the impetus for self-driven supply convoys: For every autonomously driven vehicle, that’s one fewer human driver needed, and likely one or two fewer human escorts in the vehicle itself. Fewer humans means fewer injuries and deaths whenever the convoy encounters violence, like an ambush or an improvised explosive device.

Then there is multiplication: Take the driver and the escorts out of each truck in a seven-truck convoy, and that’s suddenly 14 to 21 soldiers that can do other tasks, like escorting the convoys in other, better-armored vehicles, ones that can withstand IEDs or provide more protection from small arms fire.

In June, the U.S. Army awarded Oshkosh Defense $49 million to integrate autonomous technology with the Palletized Load System vehicles in order to put robotics in the driver’s seat.

“It actually drives very, very human,” says John Beck, senior chief engineer for unmanned systems at Oshkosh. “The motion control algorithms that are done both on the by-wire side and on the autonomy side drive this vehicle much like a person does.”

Oshkosh is one of three companies producing interrelated kits as part of the U.S. Army’s Expedient Leader Follower program, which aims to add several sets of autonomous features to the existing Palletized Load System vehicles:

In the summer, Oshkosh started integration of the system on 10 trucks, with the goal of sending them to the government for qualification and safety testing in early 2019. Also in early 2019, the company plans to integrate the system on 60 more vehicles so they can be sent to the government for an operational task demonstration in 2020, at the latest.

The by-wire active safety kit is custom designed to the model of vehicle and is integrated to the vehicle’s systems. These include the engine, the transmission, the brakes, the steering and more, with redundancies to provide full operational capability when there’s nobody behind the wheel. Other features are ones associated with modern cars, like forward-collision warning, lane-departure warning, lane centering, backup warning and more.

Those features are enabled by an array of sensors, from traditional automotive radars for forward-collision warning to proximity detection for blind-spot detection and backup warnings. There’s a camera system that provides pedestrian detection and sign recognition. The forward camera is fused with the forward radar to give the latter better confidence in detecting a vehicle. Additional cameras in the kit provide a sort of surround-view system, with a backup camera and left, right and forward-looking views, as well as a bird’s-eye view for providing situational awareness while maneuvering.

“I have a lot of young soldiers that had been driving cars that do about everything for them,” said Pat Williams, vice president and general manager for Army and Marine Corps programs at Oshkosh, “and they’re getting out in the middle of these great big vehicles. It just makes sense from a safety perspective that those heavy tactical vehicles should have the same safety features as your own vehicle would have.”

If autonomy is a point of familiarity for young drivers, reducing the number of drivers needed per convoy is a major aim of the Army in the project. The Expedient Leader Follower program features not just robotic assistance for human drivers, it also enables uncrewed vehicles to autonomously follow directly behind another cargo truck. There’s even a high-resolution camera for teleoperation, though for now the remote operator remains nearby, rather than ensconced in a building far from the action.

“This is all local communication,” said Beck, “on an ad hoc network using full 256-bit encryption. That’s one layer of cybersecurity that can be managed.”

Removing the drivers from the vehicles does not mean handing control of the cargo truck over to anyone who can get inside the cabin. Sensors in the seat mean that when set in robotic mode, the cargo truck can tell if the people inside are supposed to be there. For the most part, this means allowing intended human occupants to take over driving if need be, but it can also work to prevent unauthorized humans from entering an empty cabin and attempting to take over the vehicle.

What if someone tried to stage a great robot convoy robbery? “I imagine you’d be met with a deadly force,” Beck said.

These are, after all, vehicles designed for war zones. Removing drivers shouldn’t mean surrendering convoys to whatever road warriors can find the cargo vehicles. The mission profile for the Palletized Load System vehicles is hauling loads of up to 30,000 pounds for 8-hour-long drives.

By design, this is supposed to be uneventful work, but war punctuates mundanity with acute violence. Removing soldiers from the mindless task of driving the convoy vehicles themselves frees them to drive better-armored escort vehicles and spend escort missions focused on the escorting.

It may not seem like much, freeing up a squad of soldiers here or there. Yet these autonomous bots are a transformative change in war, shifting the grunt work from the grunts to machines, and letting the humans focus on the fighting. 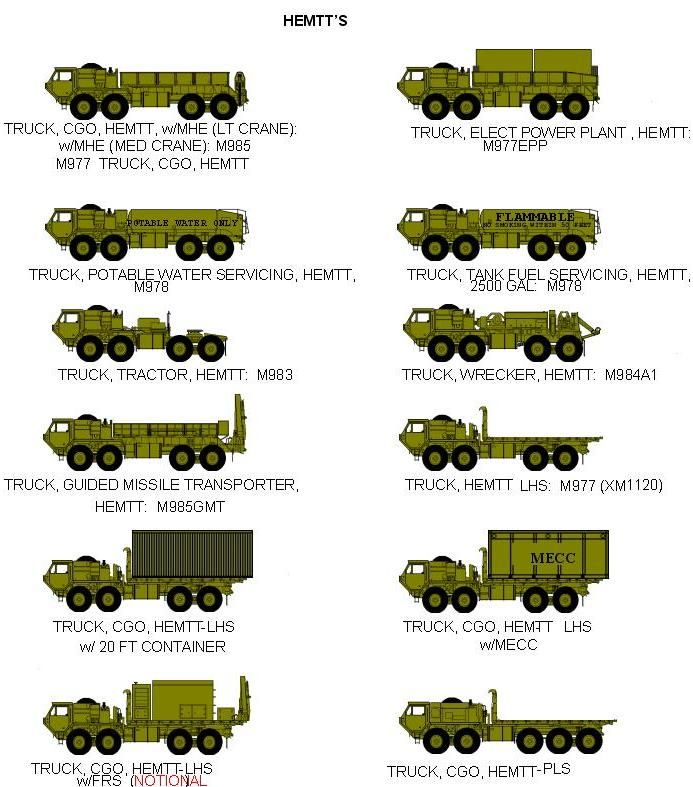 The ExLF program addresses the needs of the Leader Follower Directed Requirement and Program of Record by removing soldiers from the vehicle while operating in highly-contested areas. Oshkosh autonomous technology was designed with the flexibility to be operated in a variety of modes, including leader-follower, fully autonomous, and teleoperation, to support manned or unmanned operations.

“The PLS has been an integral part of the U.S. Army’s resupply and distribution fleet for over 25 years,” said Pat Williams, Vice President and General Manager of Army and Marine Corps programs for Oshkosh Defense. “By equipping these vehicles with autonomous capabilities, we can significantly reduce our soldiers’ exposure to enemy threats by taking them out of the vehicle altogether.”

Under the contract, Oshkosh will integrate an initial 70 autonomy kits for Program Development and Operational Technical Demonstrations (OTD). The contract holds an option to procure up to 150 autonomy kits.

“We are committed to bringing this life-saving technology to the battlefield,” Williams continued. “Through nearly 15 years of Oshkosh research and development, including independent and government testing, we are very proud to see this technology reach the U.S. Army fleets.”

The PLS is the backbone of the U.S. Army’s resupply and distribution system, providing great efficiency and performance for loading, unloading and delivering materials. It carries a wide range of cargo and is specially designed to load and unload a variety of flatrack or IOS compatible containers all on its own.

Oshkosh Defense is a leading provider of tactical wheeled vehicles and life cycle sustainment services. For decades Oshkosh has been mobilizing military and security forces around the globe by offering a full portfolio of heavy, medium, light and highly protected military vehicles to support our customers’ missions. In addition, Oshkosh offers advanced technologies and vehicle components such as TAK-4® independent suspension systems, TerraMax™ unmanned ground vehicle solutions, Command Zone™ integrated control and diagnostics system, and ProPulse® diesel electric and on-board vehicle power solutions, to provide our customers with a technical edge as they fulfill their missions. Every Oshkosh vehicle is backed by a team of defense industry experts and complete range of sustainment and training services to optimize fleet readiness and performance. Oshkosh Defense, LLC is an Oshkosh Corporation company [NYSE: OSK]. To learn more about Oshkosh Defense, please visit us at www.oshkoshdefense.com.

Founded in 1917, Oshkosh Corporation is more than 100 years strong and continues to make a difference in people’s lives. Oshkosh brings together a unique set of integrated capabilities and diverse end markets that, when combined with the Company’s MOVE strategy and positive long-term outlook, illustrate why Oshkosh is a different integrated global industrial. The Company is a leader in designing, manufacturing and servicing a broad range of access equipment, commercial, fire & emergency, military and specialty vehicles and vehicle bodies under the brands of Oshkosh®, JLG®, Pierce®, McNeilus®, Jerr-Dan®, Frontline™, CON-E-CO®, London® and IMT®.

Today, Oshkosh Corporation is a Fortune 500 Company with manufacturing operations on four continents. Its products are recognized around the world for quality, durability and innovation and can be found in more than 150 countries around the globe. As a different integrated global industrial, Oshkosh is committed to making a difference for team members, customers, shareholders, communities and the environment. For more information, please visit www.oshkoshcorporation.com.