“With AI Next, we are making multiple research investments aimed at transforming computers from specialized tools to partners in problem-solving,” Steven Walker, the agency’s director, said in a press release. “Today, machines lack contextual reasoning capabilities, and their training must cover every eventuality, which is not only costly, but ultimately impossible. We want to explore how machines can acquire human-like communication and reasoning capabilities, with the ability to recognize new situations and environments and adapt to them.”

As a result of the effort, DARPA leaders envision improving day-to-day processes, such as vetting for security clearances in a week or accrediting software systems for operational deployment in a day or less. DARPA said it plans to announce multiple broad agency announcements in the next year.

The announcement marks the second major artificial intelligence-related initiative in the last three months. In late June, the Department of Defense announced its Joint AI Center, which is expected to help provide a road map for the department’s nearly 600 AI-related programs, including the controversial Project Maven program.

The funding is a parallel effort to the Department of Defense’s Joint AI Center, known as JAIC, which is expected to cost about $1.7 billion in the coming years. That program is run through the DOD CIO’s office and is expected to focus more on applications for artificial intelligence while the DARPA programs will concentrate on answering questions related to the “foundational science” related to AI.

DARPA has a history of working on AI project. It is currently funding about 20 AI related programs and said its initial funding on the topic dates back to the 1960s.

Leaders describe the new investment as working toward what they call the third wave of AI. The first wave focused on rule-based systems for narrow tasks and a second wave has been used to find statistical patterns in large data sets. But DARPA leaders are describing a third wave as one of “contextual adaptation.”

In a press conference at the conclusion of DARPA’s D60 symposium, agency leaders said the new initiative would include a focus on explainable AI, in other words, how a machine arrived at its answer. They also said they expect a broader discussion of ethics related to artificial intelligence. 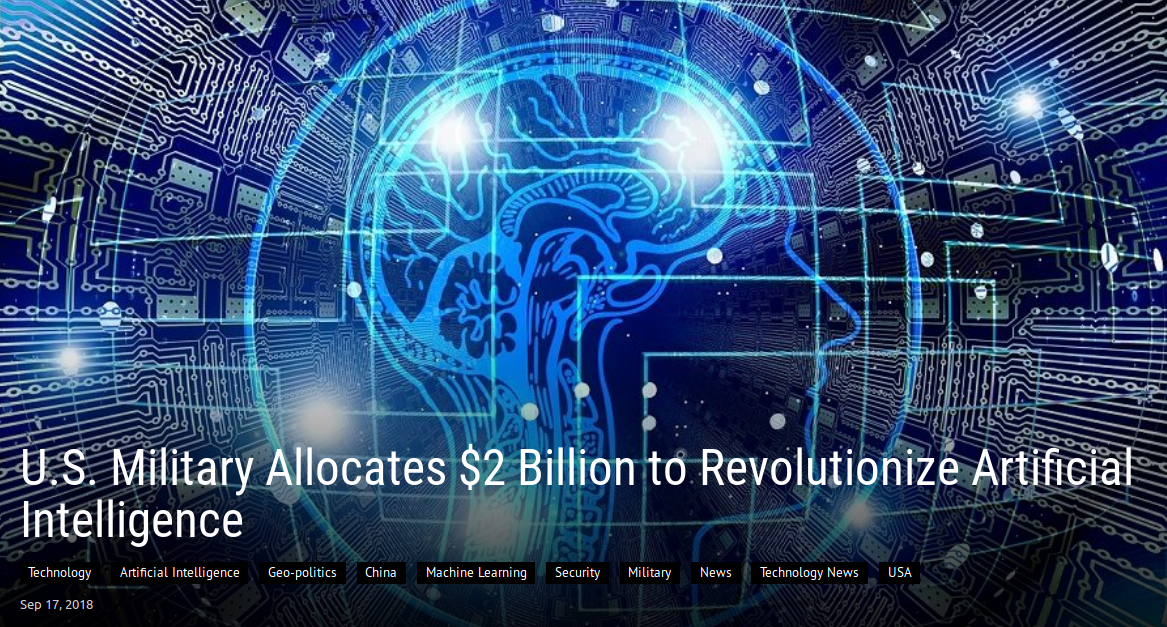 For the first time, the U.S. military’s research wing will be allocating $2 billion to develop a new generation of Artificial Intelligence (AI) with “human-like communication and reasoning capabilities” following the footsteps of China, who already devoted billions to this issue. The funding comes at a time of increasing U.S. worry over China’s national AI strategy.

Chinese tech giants such as Alibaba and Baidu work closely with the government on AI that could have applications for autonomous vehicles, health care and national security. In fact, the Chinese government has invested in a multi-year AI campaign projected could be worth $150 billion by 2020.

The White House said in July that American leadership in AI was the federal government’s second-highest budget priority for research and development, above American manufacturing, space exploration and medical innovation. According to military officials, AI could also revolutionize espionage, national security and the battlefield.

The Defense Advanced Research Projects Agency, or DARPA, will use the money to fund around 20 existing projects over the next five years and launch new ones over the next 12 months seeking a higher level of machine learning, as reported by phys.org. This is part of a “Third Wave” campaign aimed at developing machines that can learn and adapt to changing environments.

The investment aims to “transform computers from specialized tools to partners in problem-solving,”, according to Steven Walker, the director of The Defense Advanced Research Projects Agency (DARPA). He refers to these developments as “AI Next.”

“It’s the first indication that the United States is addressing advanced AI technology with the scale and funding and seriousness that the issue demands,” said Gregory C. Allen, an adjunct fellow specializing in AI and robotics for the Center for a New American Security, a Washington think tank, as reported by washingtonpost.com.

DARPA’s expansion comes at times of tension, as just 3 months ago Google announced it would not renew its Defense Department contract to help develop AI that could analyze drone footage. However, “there are hundreds if not thousands of schools and companies that bid aggressively on the programs,” Peter Highnam, DARPA’s deputy director, said in a June interview.

The programs in question explore innovative applications of AI, including in cybersecurity; the detection of AI-created fake audio or video; and in “human-computer symbiosis” programs targeting the interaction between people and machines.

Some proposals would use AI to tackle logistical challenges, such as vetting people for security clearances or reducing the data or power needs of military machines. But others are more conceptual, including programs devoted to “explainable AI,” a growing movement in the field devoted to designing software that can spell out how it came to a conclusion and justify its response.