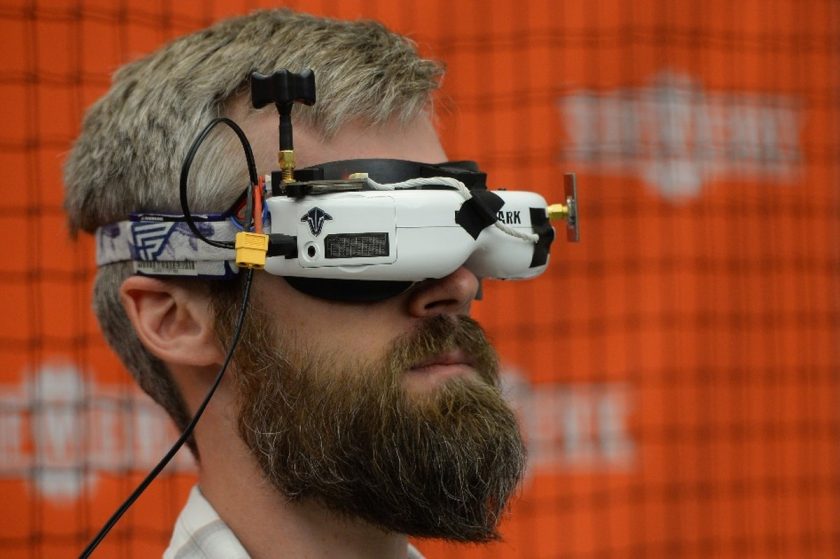 Rickey White pilots and interceptor drone during the ThunderDrone Tech Expo at SOFWERX in Tampa, Fla., Sept. 5, 2017. The expo provided an opportunity for industry, national laboratories and academia to discuss and promote new and innovative drone technology with the special operations community. (Barry Loo / USAF)

The great trick of computers is that they enable people to be more than human. In a new request for information, the United States Special Operations Command is looking for a range of computer and computer-enabled technologies, all designed to make Special Operators function in some way more than human. These technologies range from sensors to nano-drones to biomedical performance enhancements.

Taken together, the list of desired capabilities is a preview of what may be possible in the near-future to shape the intimate fights on the edges of wars. Miniature robot scouts, hyper-aware data collection and monitoring riding along low-bandwidth nodes, tailorable hyperspectral imaging sensors, biometric tracking resistance, and go-pills without adverse effects are all on asking, and that’s just a handful of the dozens of capabilities sought.

The full request for information is available online. To parse through it, here are some of the standout categories.

How many pounds of blood is a reasonable amount of blood for a robot to carry?

Ten pounds, answers the SOCOM request. Specifically, SOCOM is looking for an unmanned aerial blood delivery system that can do vertical takeoff and landing (VTOL), or at least operate without a runway. The 10 pound requirement is a minimum, and roughly approximate to the amount of blood in a person weighing 150 pounds. In order for the blood to be useful, it has to be kept between 35-46 degrees Fahrenheit, ideally through passive means, all the way from loading through transit, delivery, and unloading. That unloading should “minimize shock to the payload for any proposed delivery concept,” because again, this is about making a robot that can deliver blood in a useful and life-saving state.

Blood transport drones already exist, and have safely demonstrated blood transport in small amounts and over modest distances. SOCOM wants a blood drone that can transport its cargo over 100 miles and back, while staying in contact and control of human operators.

That’s an ambitious ask, and it’s one of just five named categories of drone technology sought by SOCOM.

Another is a platform-agnostic desire for an expeditionary ISR platform, which can operate as individuals, in pairs, or in meshed swarms. These drones will have modular payloads, carry at least two sensors, and require minimum logistics support. One asked-for way to sustain these drones is by “alternative power through environment,” like directly sipping power from power lines or incorporating a way to charge off renewable energy.

The other three categories of drone are ambitious, though in more familiar terms. There’s a listing for a Nano VTOL drone, with a takeoff weight of 2.6 ounces that can fly autonomously inside and avoid collisions, with a human monitoring but not directly piloting the drone. Ten times the size is the Micro VTOL drone, at about 1.6 pounds, capability of all-weather an autonomous flight, and able to operate both without GPS and in caves. The biggest non-blood-carrying drone SOCOM is looking for is a hand-launched or fixed-wing VTOL vehicle that can be recovered without special equipment, will weigh no more than 7.8 pounds, and can fly for at least 90 minutes at sea level.

These drones are familiar machines, mostly, even if some of the payloads are a little unusual. Sensors in a robot are common enough. SOCOM is also looking for a way to increase the sensors carried and used by a person on foot.

Collecting information is nothing without processing it into a useful form, and this SOCOM RFI seeks information on both. While the specific means are not detailed, there’s a desire for “edge computing” to “derive useful information at the point of collection through sensor fusion and forwards processing without reliance on high bandwidth, long haul communications.” That likely means computers and AI already in the field and embedded in equipment carried by the special operations forces. Making that information intelligible is one task a Heads Up Display (HUD), but SOCOM is also open to audio cues and haptic feedback, among other means, for relaying processed information in a useful and immediate form.

Collecting that information will be a new suite of Intelligence, Surveillance, and Reconnaissance (ISR) sensors, designed with the limitations and hard conditions of present and future special operations missions in mind. That means working without “owning the air domain,” a break from decades of assumptions for conventional and counter-insurgent warfare, but a break that acknowledges the likely presence of cheap drones on all sides of future battles. These sensors will include visual spectrum, infrared, hyper-spectral imaging, LIDAR, electronic warfare, can operate autonomously and be mounted on drones or scattered on the ground to work and transmit data remotely.

For good measure, SOCOM is also asking for technologies that would allow drones to work as something like a universal translator even in denied connectivity environments. With linguistic expertise, regional dialects, demographic information and cultural sensitivities programmed in, the drones will do the fraught social massaging around war. If there is anything that will convince a local population about the right intentions of the people presently fighting nearby, it’s a robot that’s hip to the local slang.

All this collecting and transmitting information is likely to produce a host of signals, so SOCOM is also looking for technologies that “help avoid physical detection by acoustic, thermal, radar, visual, optical, electromagnetic, virtual, and near infrared means.” Finding a way to remain discreet in an information rich environment is a challenge for everyone in society today, one tacitly acknowledged by an ask for a technology to “help manage digital presence within the realm of social media.” (Step 1 for that is probably not using a jogging app with geolocation turned on.)

Biometric technologies (think: facial recognition, etc) are often seen as a tool of the powerful, wielded by governments against vulnerable populations. While they certainly can be that, they can also pose a challenge to individuals in the employ of one military trying to evade the sensors used by another. To that end, SOCOM is looking for technologies that provide resistance to biometric tracking. (While it’s not specified, Juggalo-style face paint might work for this exact purpose).

Finally, once a special operator has evaded detection, used the sensors on hand, and has an adequate amount of robot-delivered blood to keep going, there is an interest in human performance and biomedical enhancements. These include drugs and biologics that can enhance cognitive performance, increase “peak performance sustainability, including increased endurance, strength, energy, agility, and enhanced senses” and a whole other wish list of capabilities that officers from time immemorial have demanded of the people under their command. Most promising, perhaps, is the ask for “medical sensors and devices that provide vital sign awareness and send alerts,” and “austere trauma treatment,” both of which don’t require transformative properties in the people using them.

It’s too early to say how many of the asks in this RFI are realistic, though some are already delivered technologies and others certainly seem near-future plausible. More importantly, the request as a gestalt whole suggests a desire for people that are more than human, and capable of performing everything asked of them in remote battlefields, far from home. As the United States approaches its 17th continuous year of war abroad, asking that science deliver what science fiction promised feels at least as plausible as imagining a future where deployments abroad are scaled back.