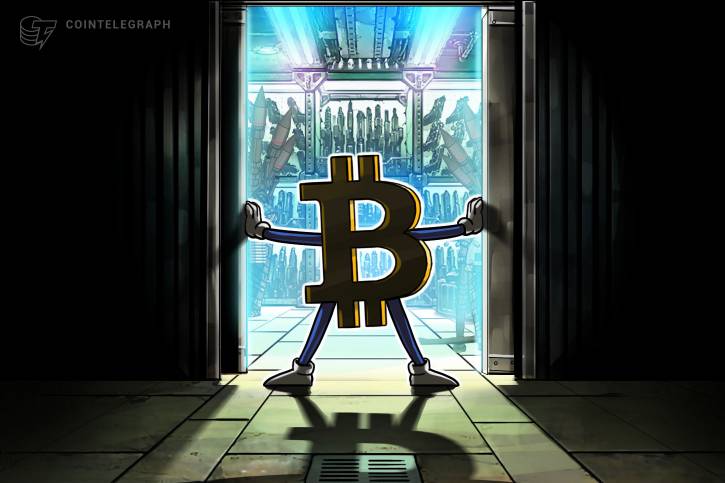 Abandon the Proof-of-Work (PoW) algorithm to break ASIC market leadership?
Seems like a dumb idea to me: make your own ASICs!
… especially when it is about private PoW Blockchains — TJACK

The crypto community is bracing for a real revolution – leading cryptocurrencies may abandon the Proof-of-Work (PoW) algorithm. The reason is the far-reaching game of mining giant Bitmain, which is building up its monopoly on the market by stamping out new ASICs for top coins. This concerns not only the users who prefer traditional GPU farms, but also the developers themselves, as the ecosystem becomes increasingly centralized and vulnerable to attacks.

It seems that the line production of short life ASICs for new coins has turned into an arms race between Bitmain and less-rapid rivals. Everyone wants to bite off the last piece from the PoW algorithm, promising a quick payback and leaving no chance to traditional GPU farms. The first Antminers are sold out before the start of sales, and users seem to receive the promised profit. If it were not for one thing – ASICs are quickly becoming unprofitable, and growing hash rates lead to Blockchain centralization.

In the community, Bitmain has gained a reputation of a “greedy bunch” after using a huge hashrate on its own pool (Antpool.com) to block important votes in the Bitcoin network. The resistance formation itself began at the start of the year when Bitmain suddenly announced the launch of Antminer A3 production for SiaCoin mining, destroying 4 months of labor of its old competitor Obelisk. 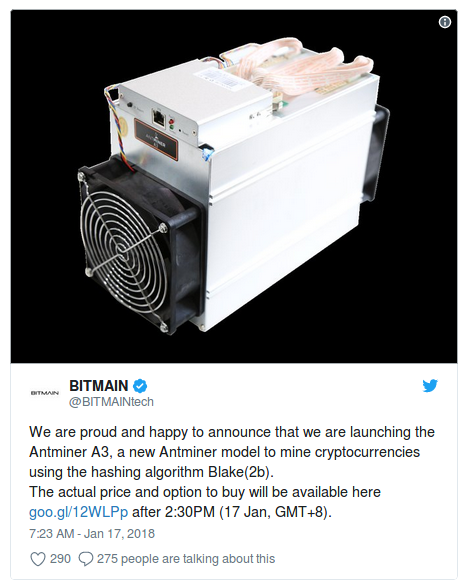 At that time, David Warrick, the founder of SiaCoin and owner of Obelisk, did not fulfill his soft fork promise and gave Bitmain a chance to fix the situation. 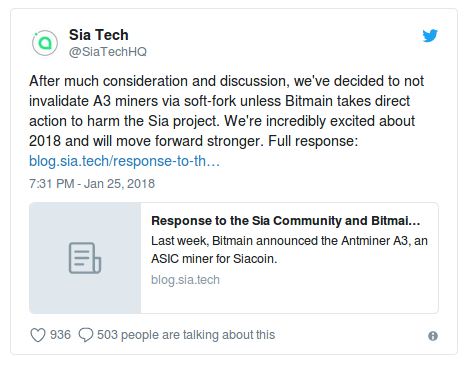 Actually, the situation was corrected by itself. At the start of sales, Bitmain promised a daily profit of $460, which in just 10 days fell by 2 times, with only $10 to date.

The winter party A3 was not sold out yet when Bitmain announced a new model, which this time would take up the extraction of more popular coin, Monero (XMR): 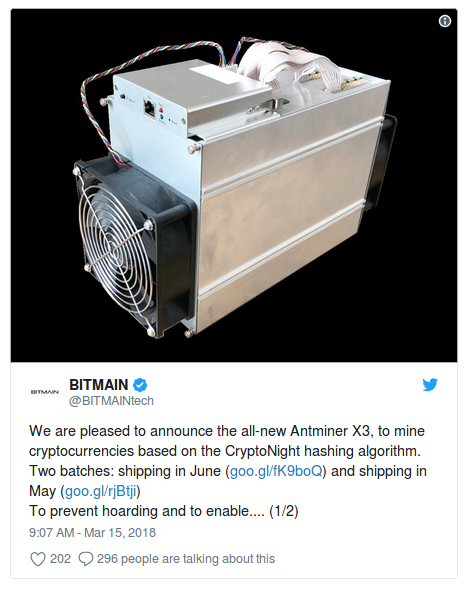 Already tense, the state of things was further fueled by Baikal, which following its rival hastened to bite off a piece from the Monero pie. Developers of the latter were less compliant than SiaTech and kept their promise to conduct a hard fork for resisting ASIC mining. Nevertheless, Bitmain didn’t arrive and withdrew from responsibility for possible problems with Monero, promptly placing the following disclaimer on its website:

“One major cryptocurrency which is using CryptoNight hash function is about to change their PoW algorihtm [CT: site misprint], and according to their public statement, it is purposely to brick ASIC mining rigs including X3. When you buying it, you are betting that they are wrong.”

Although ASIC miners support other coins, for example, Bytecoin, Aeon and Dash, what about the $4,500 profit promised per month that turned into a pumpkin?

Monthly return as of April 26, according to Cryptocompare

Monthly return as of March 17, according to Cryptocompare

Particularly as many users are dissatisfied with the the reduced profitability and unusable equipment that “crashes every 30 to 40 minutes and restarts the PC”.

Bitmain owners would not have been themselves, had they not coveted a more delicious crypto piece. On April 3, developers announced the release of the “world’s most powerful and efficient EtHash ASIC”, now under the Ethash algorithm, which Ethereum and Ethereum Classic work on. 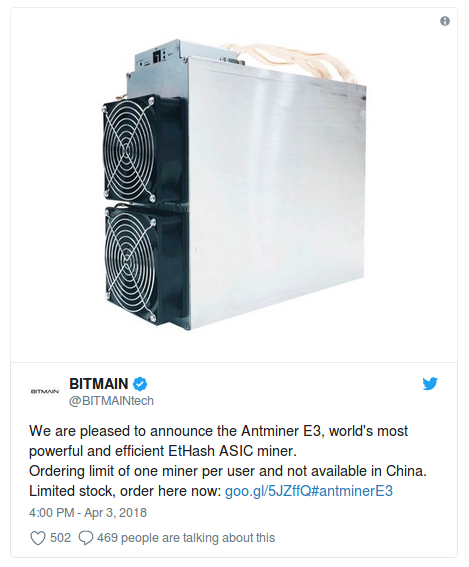 The master of surprises from China successfully refuted the general belief that the Ethash protocol is ASIC resistant and Ethereum can be mined only through traditional GPU cards.

In addition to Bitmain, three other companies are working in this direction, one of whom – Halong Mining – recently joined the Blockchain Defensive Patent License initiative with a patent for the overt version of AsicBoost technology.

It seems that this caused concern in the Ethereum Foundation, which until then had been slow to move to the Proof-of-Stake (PoS) algorithm for reducing the role of mining. Is Bitmain sure that Ethereum will not be able to abandon PoW, and the transition to PoS will result in just another Ethereum classic-style hard fork?

While one of the Ethereum developers initiates a hard fork Ethereum Improvement Proposal (EIP) #958 on Github, and the other one receives a 57 percent vote from his Twitter followers supporting this radical measure, Vitalik Buterin shared with Cointelegraph his opinion that the threat is overestimated:

“I am in principle open to it, but I feel it’s early to commit to a specific fork, because we still know fairly little about what kind of ASICs we’re dealing with, whether they are really ASICs or just super-optimized GPUs with non-essential parts stripped out, and what options there are for changing the algorithm.”

He also told Cointelegraph that he expects it “to continue to be debated within the community in the short to medium term”.

It seems that he is right. While some users expect to see a large number of GPU cards coming to the secondary market soon, others pay attention to the fact that by the time the Antminer E3 reaches the consumer, it may actually lose its relevance. According to AsicMinerValue, E3 owners will get $7.38 per day or $221.36 per month after deducting electricity costs.

While Bitmain again shirks responsibility and happily accepts orders for the Antminer E3, no more than 5 units are able to be ordered at a time. According to the manufacturer, by the time the shipments start, the performance and energy efficiency of the model will be improved.

Bitmain’s monopoly continues to grow. At the same time, the number of available coins decreases and the number of miners remains the same. The debate is becoming more acute, shifting more pressure on the development team. The creators of ZCash were openly accused of betraying the interests of the community, Monero conducted a hard fork, and Ethereum is on the way to changing the algorithm.

While some companies conduct hard forks and others occupy waiting positions, Bitmain and its colleagues are actively bringing more and more powerful devices to the market that can supplant obsolete configurations. However, it is worth remembering one weak spot of ASICs is they can be hit by ASIC Resistance followers. This is the impossibility of reprogramming the core. So, fundamental changes in the PoW algorithm could soon send Bitmain to the panel bench.