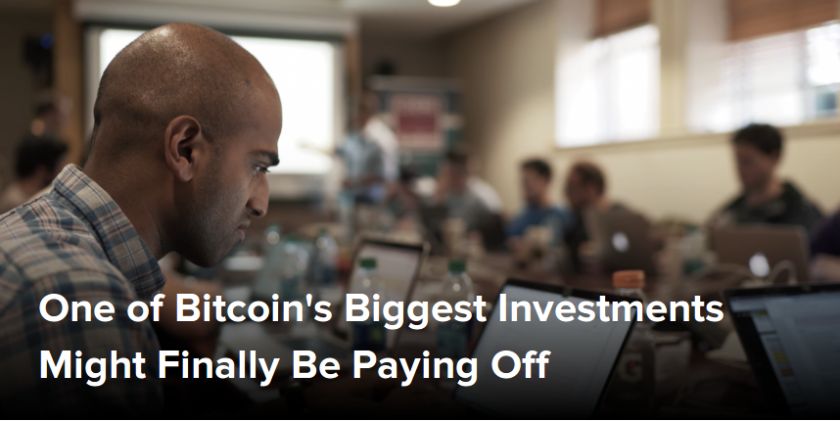 Bitcoin appears to finally be making headway with one of its less-appreciated, but critical challenges: recruitment.

Simply put, the number of developers contributing to the cryptocurrency’s open-source code is suddenly on the rise. Sure enough, there have been at least 21 code submissions approved from new contributors over the past 50 days – and that’s no small feat given developers have struggled for years to entice new coders to work on the project.

And while the number of merges over the nearly two-month period didn’t jump up drastically, seeing new names within the Github repository is a welcome sight given that most of the hundreds of contributions to bitcoin over the past several years have been coded by a few dozen veterans.

According to several developers CoinDesk interviewed, there isn’t a direct correlation they can point to explain the increase, though there are likely contributors. Indeed, for some it’s a strong sign serious investments of time and effort in training and academic programs are finally paying off.

“Many educational and training efforts have lately helped to introduce new developers to Bitcoin Core and the bitcoin software ecosystem,” Ferdinando Ametrano, a professor at Politecnico di Milano who has served as a program director at bitcoin developer conferences, told CoinDesk.

Ametrano is, of course, talking about efforts such as Chaincode Labs, which has a residency program in New York where prolific bitcoin developers like John Newbery have been giving their time to helping new recruits.

After attending Chaincode’s first residency in 2016, Newbery has now taught 11 participants from places like Israel and Hong Kong.

“It feels like we’re busier now than we were six months ago. It’s almost impossible to keep up.”

But Newbery isn’t the only one teaching.

Another possible contributor is Jimmy Song’s Programming Blockchain Workshop, which has found the high-profile developer and Blockchain Capital partner teaching roughly 250 people since the workshop launched (in multiple locations across the U.S.) in September.

And demand has been so high that he’s offering a few more sessions over the next few months.

Of note, though, is that those surveyed believe these programs could do more than boost contributions to the code by expanding and diversifying bitcoin’s pool of contributors.

“One of the things that surprised me is what kinds of people take my class. I expected it to be all developers,” said Song.

But as it turned out, participants ranged from teenage girls to hedge fund managers and retirees.

“Growing the developer team, in numbers and in quality of contributions and everything else, is important because you need a diversity of views,” Song said. “You don’t want it to just be a couple of people that do everything.”

Others agree the current hegemony within the bitcoin developer community could set back the cryptocurrency eventually.

Matt Corallo, a long time Bitcoin Core contributor, tweeted in April about the importance of diversifying the ranks, saying:

“The many studies indicating broader sets of backgrounds and viewpoints add a ton to the quality of decisions made in management should be pretty overwhelming evidence for anyone who cares about evidence-based decision making.”

Song echoed that, noting that bugs can creep in when there are too many developers with the same mindset working on a project.

Newbery continued, explaining that the Chaincode residency and other new educational programs for bitcoin development are touching on one of the key challenges the industry has typically faced – a lack of face-to-face learning opportunities.

“It’s very difficult if you don’t have that face-to-face interaction with other contributors.”

This seems to have played out with Janey Gak, who recently attended one of Song’s workshops and is now developing a cryptocurrency wallet for users in developing countries like Afghanistan.

Not only did she learn the technical aspects of bitcoin that she needed to be able to build the app, but also plans on bringing what she knows (and learns) about Afghanistan and the developing world to the Core development community.

And this, according to Song will further decentralize the network and benefit the protocol by having a diverse pool of people to check code.

Echoing this, Newbery told CoinDesk, “All bugs are shallow given enough eyes. We all see bugs other people don’t see. Having that wide range of backgrounds and experiences is very beneficial to the quality of the project.”

And adding more developers is particularly helpful given that there are only a few dozen people right now with enough experience to properly review prospective contributions, creating a bottleneck. Currently, fewer than two dozen developers work on bitcoin’s software full-time out of roughly 40 regular contributors.

But according to Gak, it shouldn’t be all that difficult to attract more developers like herself, since experienced bitcoin developers have been so responsive.

Gak told CoinDesk that after Song’s workshop, several developers reached out to her to offer their help on her project.

“The community is full of very supportive people,” she said, adding:

“I’ve never felt so welcomed in my life.”

But still, hurdles stand in the way.

The complexity of the protocol on which billions of dollars in value currently depends makes the onboarding process for new developers no small task.

Plus, many of bitcoin’s developers work on the project on a volunteer basis, not always the most appealing idea. Although, several sponsorships, including ones from the MIT Media Lab, are allowing bitcoin developers to turn their labor of love into a full-time gig.

Yet still, this type of expertise is rare, with demand currently exceeding the supply of capable developers by far.

Although, this is a challenge shared by all open-source endeavors.

“I’m not sure finding people is a bitcoin-specific problem,” veteran bitcoin contributor Michael Ford told CoinDesk. “Any large open-source project will always struggle to find people who are willing to work or give up their own time for free.”

Although, certain idiosyncrasies may compound the issue in bitcoin’s case.

For instance, Newbery said that Bitcoin Core’s rigorous review process can be off-putting for prospective contributors.

“Maybe frustration is a challenge for people,” he said. “It feels like the review burden at Bitcoin Core is very high compared to other projects.”

Indeed, Christopher Coverdale, a developer who recently contributed to Bitcoin Core for the first time, told CoinDesk he noticed it takes an unusually long time to get up to speed on the network’s meticulous standards. And while Coverdale plans to continue participating, he added that it requires perseverance.

“The senior developers and reviewers have far too many pull requests to review and have important projects to work on, so understanding that pull requests might be reviewed a week later is perfectly normal,” Cloverdale said, adding:

“I’ve also found that patience is really important when contributing to bitcoin.”