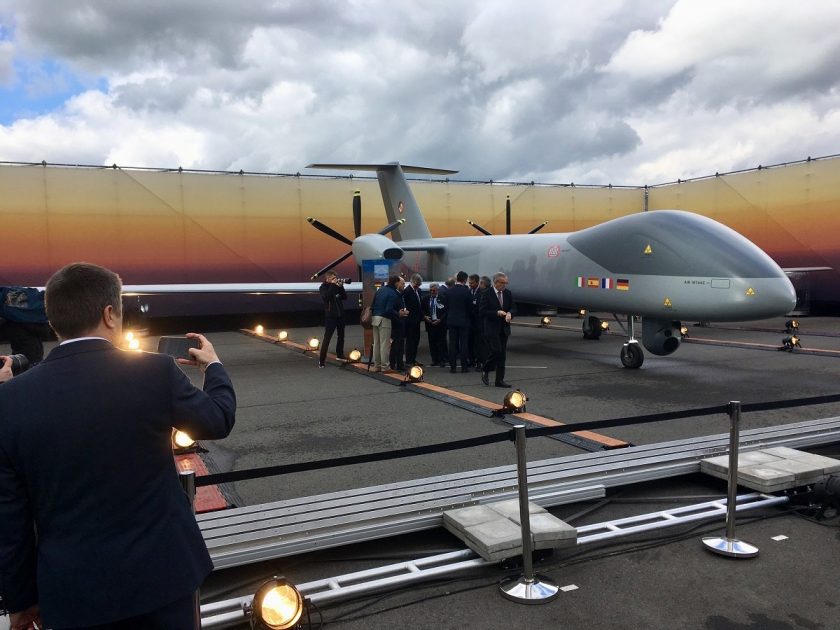 BERLIN ― Airbus, Dassault and Leonardo have revealed the first full-scale model of an envisioned European drone at the Berlin Air Show, upping the the visibility ― and scrutiny ― of a project meant to epitomize the continent’s growing military profile.

Thursday’s mock-up unveiling was orchestrated with big fanfare on the tarmac of Schönefeld airport south of the German capital. Featuring climactic music, lights and dissipating smoke, the ceremony organizers were lucky enough to catch a momentary break between a hefty mix of rain showers, sunshine and wind gusts, considered typical April weather here. 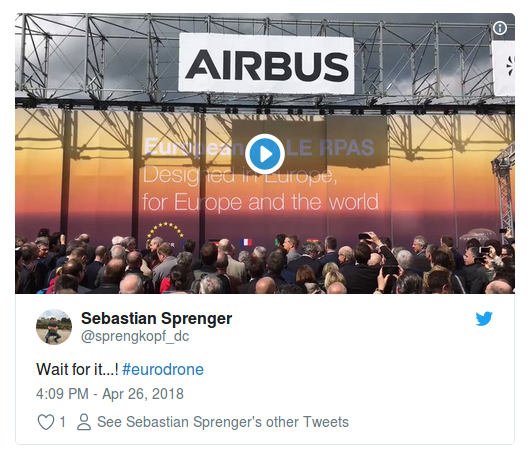 The medium-altitude, long-endurance aircraft rides on a twin-turboprop propulsion system and will come in a strike-capable configuration when it reaches the actual flying stage in the mid-2020s. Germany, France, Italy and Spain have a hand in the program, though only the first three are considered the principal main industry partners, with Germany’s Airbus in the lead.

Notably, companies are building the unmanned plane so it can operate immediately in the dense European airspace. Past practice of first acquiring a drone and later worrying about requisite certifications has proven to be problematic, especially for the Germans.

The mock-up is based on a vehicle configuration agreed by the partner nations in mid-2017. In January, the program passed a systems requirements review, prompting another study phase that should last through 2018 and lead to another milestone, a “system preliminary design review,” the companies wrote in a statement.

“While still a lot of work lies ahead of us, this full-scale model represents a first milestone of what Europe can achieve in a high-technology sector if it bundles its industrial strength and know-how,” said Dirk Hoke, CEO of Airbus Defence and Space.

Hoke told reporters he views the approach to the drone as a learning experience for a new combat aircraft development that is on the horizon between Germany and France.

In addition, he told Defense News there is some hope of redemption for problem-plagued projects of the past. For example, the European drone will come in one base configuration for all the countries that users can then move to expand, avoiding too many separate build types that came to haunt the A-400M, Hoke said.

“This is a chance to prove that we can work in a different way together,” he said.

One of the configurations will entail a strike package, though officials said they had yet to think about the particulars of that mission set.

In an apparent nod to Germany, Hoke told Defense News that the combat capability would depend on political sensitivities in each user nations, and that customers can opt to solely install the reconnaissance features.

Armed drones are a thorny subject in Germany, as the weapons conjure up images of the U.S. government’s targeted killing of suspected terrorists, which many in the country reject.

By the time the issue of armaments comes up for the Eurodrone, however, there may already be a resolution. That’s because upcoming parliamentary decisions could lead to Germany’s first-ever armed drone, the Heron TP, leased through Airbus from Israel.