Non-Equilibrium Systems: Driven and Non-equilibrium Quantum Systems (DRINQS)
… the discovery of time crystals kicked off research into the existence of quantum systems that become more stable and coherent with the addition of a ‘tick’ from an external pulse.

The US military likes to stay at the forefront of the cutting edge of science – most recently investigating ways they can ‘hack’ the human brain and body to make it die slower, and learn faster.

But in an unexpected twist, it turns out they’re also interested in pushing the limits of quantum mechanics. The Defence Advanced Research Projects Agency (DARPA) has announced it’s funding research into one of the strangest scientific breakthroughs in recent memory – time crystals.

In case you missed it, time crystals made headlines last year when scientists finally made the bizarre objects in the lab, four years after they were first proposed.

Put simply, time crystals are made up of atoms with constantly oscillating spins.

These atoms flip flop, or ‘jiggle’ in the presence of a regular force, such as an electric field keeping them ticking along – just think of it like a plate of Jell-O wobbling when you tap it.

But what’s very odd about them is that the oscillation doesn’t necessarily line up with the tick of the field. For example, the time crystals made last year flipped only half as fast as the tick driving them.

“Wouldn’t it be super weird if you jiggled the Jell-O and found that somehow it responded at a different period?” explained one of the researchers behind the discovery, Norman Yao, from the University of California, Berkeley.

That’s all well and good, but what could DARPA possibly want with these things?

“There might be applications related to measuring things with exquisite sensitivity in time and magnetic field domains,” Ale Lukaszew, DARPA program manager, told Ryan F. Mandelbaum over at Gizmodo.

“Not a lot of these applications are open for discussion.”

In other words – it’s classified.

But from the DARPA announcement it seems their main area of interest is in the way time crystals could improve the incredibly precise measurements of atomic clocks.

If these clocks are sensitive enough, they could measure even the smallest changes in magnetic or gravitational fields – for example, providing insight into hidden tunnels and cavities underground.

Of course, atomic clocks already exist, but right now they’re so unstable, they need to be chilled to a ridiculous amount and kept in isolation, which is not very practical for military use.

And this is where time crystals come in.

The discovery of time crystals kicked off research into the existence of quantum systems that become more stable and coherent with the addition of a ‘tick’ from an external pulse. These are known as non-equilibrium systems, and time crystals were one of the first examples we’ve ever discovered.

However, it’s highly likely that there are a lot more of these non-equilibrium systems out there – systems that become more coherent and more resistant to outside influence with just a little external push.

And that seems to be why DARPA is interested – they want to look into whether these non-equilibrium systems could help them take atomic clocks out of the lab. The group is called the Driven and Non-equilibrium Quantum Systems (DRINQS).

The goal, according to the press release, is “to yield 10- to 100-fold performance improvement for defense-related sensors and devices”.

“A simple illustration of the concept of driving something out of equilibrium to increase its stability is the well-known trick of making an inverted broom stand up on the palm of your hand or on one of your fingertips,” said Lukaszew.

“If you hold your hand still, the broom is unstable and will fall over quickly. But if you drive the broom out of equilibrium by moving your hand around periodically, you can make the broom very stable, so it remains upright indefinitely.” 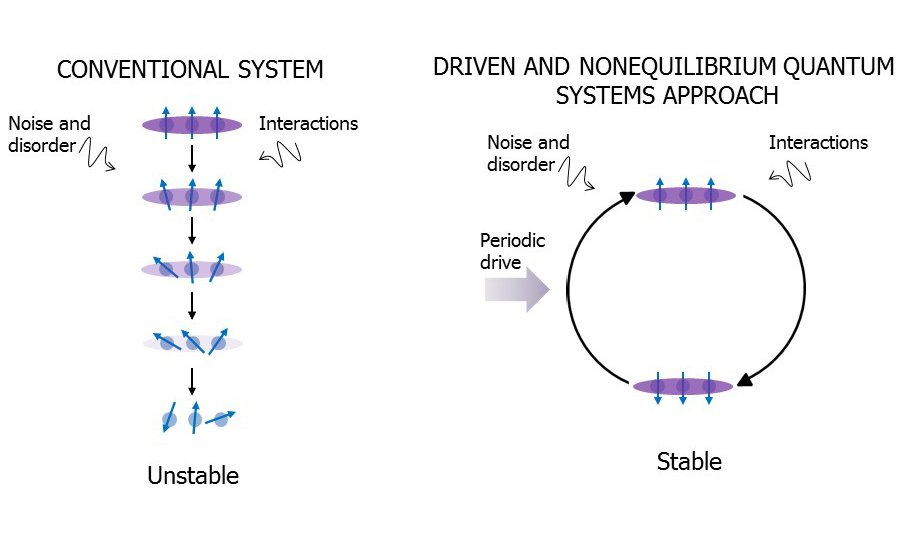 “If we can introduce a periodic drive to enable particles to be packaged close together in small spaces at room temperature, while still retaining quantum coherence, we may be able to reproduce the performance of the best sensors, such as atomic clocks and magnetometers, in small and robust devices for military use,” Lukaszew added.

It’s still not clear exactly how atomic clocks would help DARPA in the field, or how much funding DRINQS will receive.

But it’s pretty cool to know that scientists aren’t alone in trying to figure out the quantum weirdness of time crystals and other non-equilibrium systems – the US government will be putting money behind the cause, too.

“For the last half-century, we have been exploring equilibrium matter, like metals and insulators,” Yao explained last year. “We are just now starting to explore a whole new landscape of non-equilibrium matter.”