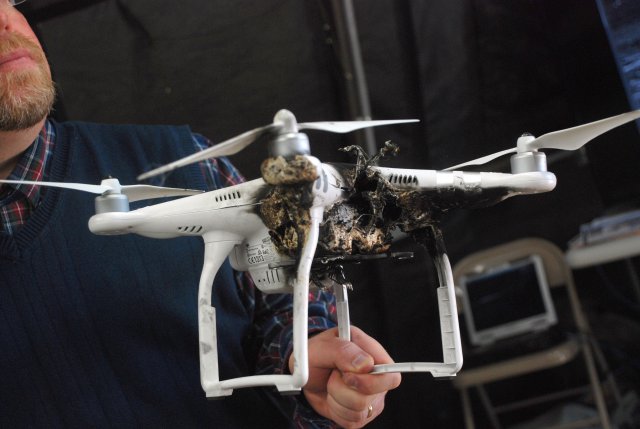 WASHINGTON: The market for weapons that can shoot down small drones, used by the likes of Hezbollah and Daesh, should rise from almost nothing to “several billion dollars” over the next five years. Raytheon is pushing hard to lock in as much of this market as it can, building both High Energy Laser (HEL) and High Powered Microwave (HPM) weapons that can find, fix and kill or disable the increasingly cheap and capable drones.

Evan Hunt, the company’s senior manager for HEL, offered that market estimate when I asked him his estimate for the market over the next five years. Considering there is roughly a quarter of a billion in the 2019 Pentagon budget request for Air Force directed energy work, that’s a mighty steep curve.

A quadcopter mini-drone downed by an Army laser in a 2016 test.

But the mini-drone threat is a high priority for the Pentagon, along with anti-aircraft defenses in general. Daesh has used commercial drones to drop hand grenades. Hezbollah has used similar setups to strike Daesh. The Iraqi police and military have used commercial drones for similar purposes. And the Russians have used drones large and small to target Ukrainian troops for devastating artillery strikes.

It’s getting so anyone can buy a drone for $1,000 or less, fiddle with it a bit and turn it into a reconnaissance and strike platform. It can’t drop 1,000 pound bombs but it can track you, kill a few people and keep on going. A swarm of such drones was recently used to attack Russia’s largest base in Syria. Worried about the intelligence that could be gathered and the chaos and damage that attacks could cause for Forward Operating Bases, nuclear power plants and ports, the military is pushing to get capabilities fielded.

Now compare the $1,000 drone to $38,000 for a single Stinger — the smallest, cheapest anti-aircraft missile in the US arsenal — and you see the military’s problem. Even a relatively low-budget adversary can afford more drones than we can afford missiles to stop them. Old-school machinegun fire can shoot them down, but stray bullets can end up in unpleasant places; traditional electronic warfare can shut down their control links back to their human operators, but drones are becoming increasingly autonomous, capable of navigating on their own.

That brings us to so-called directed energy weapons. Lasers burn a hole in the target; microwaves fry its electronics. Lasers are inherently precise and both types of weapons run off electricity — which means the cost per shot is potentially pennies, and the ammunition doesn’t run out as long as there’s gas in the generator. All of a sudden wave after wave of swarming drones don’t look nearly as intimidating.

Raytheon has spent several million of its own money to build a High Energy Lasers pod that can be fitted to a wide range of aircraft, says Hunt, the company’s senior manager for HEL. They’ve designed the targeting system to be compatible with that now legendary generation of video game aficionados. It uses an XBox One-style controller and the graphic interface really does look quite a bit like a video game.

While Hunt was cagey about the system’s range in a meeting with trade reporters yesterday, he told my colleague Richard Sisk at my alma mater Military,com that the system could find a drone at 5,000 meters. He showed us an intriguing video showing a drone flying down below tree level and among hills, but the targeting system was still able to pinpoint it for the laser. That’s a capability he believed no one else could field right now.

The laser has been fitted to SOCOM’s favorite light vehicle, the Polaris MRZR (see above), tested on Apache helicopters, and it could be installed on aircraft from Reapers to V-22s. The pod weighs 1,000 pounds so the range of airframes is pretty big. Hunt says the system on the MRZR “is already fieldable” and the pod system can be “easily ruggedized for true military deployment” in two years, should the budget appear. 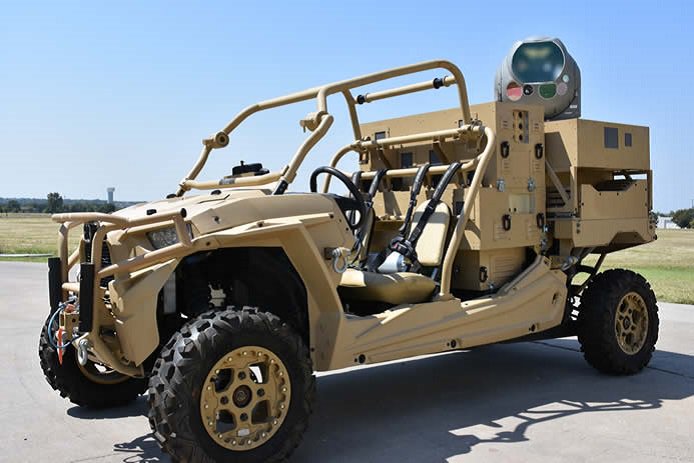 For the Big Army, the HEL can be fitted to the 8×8 Stryker armored vehicle. The Joint Light Tactical Vehicle (JLTV) — the successor to the Humvee — can power it, the Raytheon executive says. That doesn’t mean the laser is small enough to fit on the JLTV, but the technology keeps shrinking, so a truck-mounted model is probably not far off.

The other system, the High Powered Microwave, is really intriguing to a guy who loves both electronic warfare and kinetics. While flames don’t sprout from a stricken aircraft to offer the satisfaction of a clear hit, as happens with the laser, the microwave fries the electronics insider. In the video you’ll see the poor little drone just fall out of the sky. Donald Sullivan, Raytheon’s HPM expert, says the system pictured above is going to get considerably smaller and lighter than its current configuration of 18,000 pounds on a 20-foot trailer. The very short microwave pulses remove any possibility of the system being considered a lethal weapon — it’s not enough power to kill a human — so it could be deployed just about anywhere.

Both the HPM and HEL systems were tested at Fort Sill, Okla. — home of the Army air defense corps — during the Army’s early December Maneuver Fires Integrated Experiment (MFIX). HPM took down 33 drones, frying them in groups of two and three, the company says in a release. HEL identified, tracked and destroyed 12 Class 1 and 2 drones.