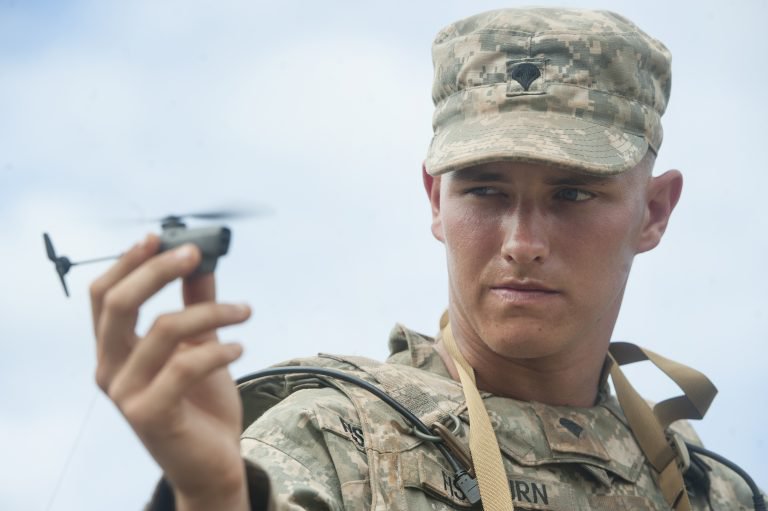 A soldier holds a PD-100 mini-drone during the PACMAN-I experiment in Hawaii.

“To get a quantum increase in the quality of close combat forces, we can do it in the next two years, (and) the cost compared to the rest of the DoD budget is very small,” said retired Maj. Gen. Robert Scales, who chairs the advisory board for Secretary Mattis’s Close Combat Lethality Task Foce.

WASHINGTON: Forget the old-school grunt. Imagine a future American infantryman trained as intensively as a fighter pilot through hundreds of virtual and real-world drills, culminating in a “small unit Top Gun.” Imagine infantry going into battle with swarms of drones serving as scouts and fire support. Imagine Army and Marine infantry exempted from the Pentagon’s bureaucratic personnel policies so they can build teams of experienced soldiers in their late 20s and early 30s, much like Special Forces.

“Special Forces, Marine infantry, Army infantry…. these are the forces that are overused, overextended and the most likely to die,” said Bob Scales, a leading advisor on infantry to Defense Secretary Jim Mattis. “There’s no one administration or one service one can fault for this, because this has been a nagging problem…. since World War II.”

But it doesn’t have to stay that way, Scales told me: “To get a quantum increase in the quality of close combat forces, we can do it in the next two years, (and) the cost compared to the rest of the DoD budget is very small.”

Scales spoke to me Monday about his new position chairing the advisory board for Mattis’s newly created Close Combat Lethality Task Force.

“My relationship with Secretary Mattis….. goes back almost 14 years on this subject,” Scales told me. Mattis, a retired Marine four-star, and Scales, a retired Army two-star, worked together when Mattis commanded first Marine Corps Combat Development Command (MCCDC) and then the since-disbanded Joint Forces Command (JFCOM).

Scales is both a military historian and a futurist, as well as a passionate advocate for the often-neglected “poor bloody infantry.” He played a leading role in the Army After Next wargames of the 1990s, which pioneered new concepts in the military use of drones and networks, including ideas now being revived as part of the Army’s Multi-Domain Battle concept. He dedicated his latest book to Mattis and has spoken about it to enthusiastic audiences in the Marine Corps — although, ironically, not from his own service.

In private conversations, “the rank and file and the leaders in the Army I’m talking to are extremely enthusiastic,” Scales said, but as for public presentations, “the first time I’m actually talking to an Army audience is on the 21st at AUSA.”

That’s when the Association of the US Army will host Scales and DoD personnel undersecretary Robert Wilkie, who’s overseeing Mattis’ task force. That Mattis has given the lead to “P&R,” rather than to an acquisition or technology official, suggests how much the task force will emphasize training, personnel, and policy over new equipment. 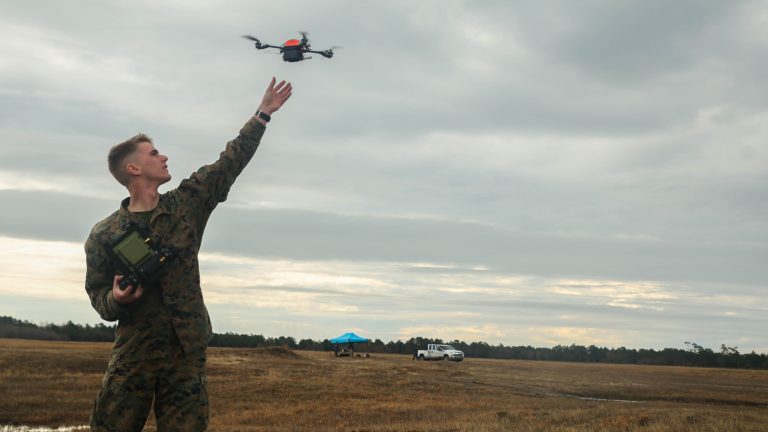 A young Marine reaches out for a hand-launched drone.

That said, Pentagon budget plans include about $1.2 billion in new investments stemming from the effort’s first phase, a Cost Assessment & Program Evaluation (CAPE) study that Scales said focused primarily on material. So what do the infantry really need?

“I think the Number One investment is in sensors and robots,” Scales told me. The great technological revolution of our time is not in armored vehicles, warships, or even jet aircraft, he argues, whose performance is improving on the margins rather than by great leaps. The real revolution is in electronics, especially the continual miniaturization of computing power, which means capabilities that once required a large dedicated platform — a vehicle, a ship, or an aircraft — can now fit in packages small enough for the infantry to carry.

Shoulder-launched anti-tank guided missiles were killing tanks and jets as far back as 1973 (although active protection may change that). Today, Scales said, the breakthrough lies in small unmanned systems — miniature drones in the near term, but ground robots further out — that can carry sensors and weapons for the infantry. The ideal, he said, is systems sufficiently small and cheap that they’re “disposable,” with troops treating them as munitions to be expended rather than as assets to be husbanded.

Both the Army and Marine Corps have experimented with such technologies. Marine Commandant Bob Neller — who noted Scales’s influence at a recent NDIA breakfast— has promised every Marine infantry squad will have its own drone and its own unmanned/electronic systems specialist.

So far, though, the official experiments have focused on robotic Intelligence, Surveillance, & Reconnaissance (ISR), not strikes. Scales, however, was one of the first military futurists to propose armed drones, back during the Army After Next wargames. Whereas large Predators and Reapers strike high-value targets on the orders of senior commanders today, Scales envisions a near future in which every squad leader can order strikes with armed mini-drones.

“This turgid firepower system (we use today) can be replaced by stealthy orbiting drones and a squad leader with a fire support app,” Scales told me. “He presses the button and the target disappears in 20 seconds.” 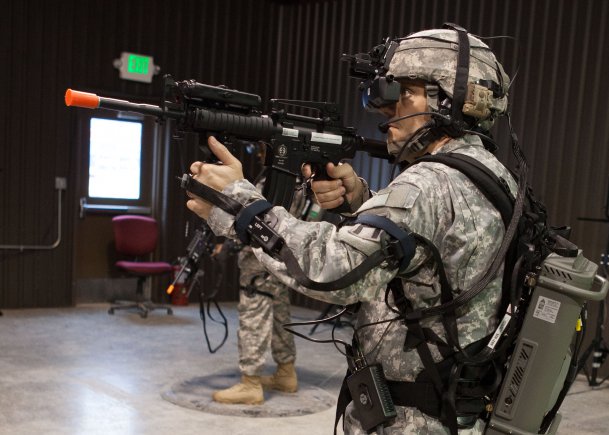 Technology doesn’t just apply on the battlefield, however. It can save lives long before the first shot is first by changing how the infantry train.

Why, asks Scales, do we invest millions in training a fighter pilot, but not in training the infantry troops whose lives are at much greater risk? “We’ve learned the effects of TOPGUN on fighter pilot proficiency, and yet today we don’t have the equivalent (for infantry squads),” Scales said. “What if you had a small unit TOPGUN?”

Scales envisions training simulators at every level, from a specialized training centers like the Army’s Fort Irwin down to individual units at their home bases. While training in the field is still vital, it’s limited by its expense, the time it takes to set up, and the physical terrain. In real life, you can’t train your troops in the woods one day and then the next day build a full-scale megacity in the same place, but in virtual reality, you can switch from forest to urban with a few keystrokes. VR allows a variety of environments, adversaries, and tactical situations that real-world training does not — and it allows you to experience them over and over again.

A typical infantry unit gets to do a “force on force” exercise against a thinking, reacting opponent a handful of times a year, Scales said. VR training allows such exercises “hundreds of times a year, he said, “so a straight leg (infantry trooper) can have just as much opportunity to become as proficient as an operator in Delta Force.” 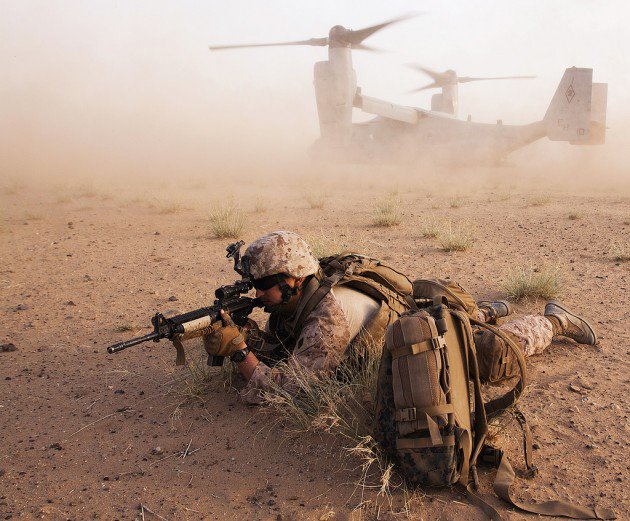 A V-22 lands Marines in Helmand.

Training is not the only way in which Scales sees regular infantry becoming more like special operators. He also wants the infantry to get its pick of personnel — and to be exempted from Pentagon policies that make it hard to train expert teams and keep them together.

“SEALs, DELTA, and Rangers are selected from the top mental categories. Not so for our straight leg close combat units, both Army and Marine,” Scales said. “Why not? We know from experience, many years of experience, that intelligent soldiers are far more effective and far less likely to become casualties.”

Older infantrymen are more effective as well, because they’re more experienced, skilled and emotionally mature than 18-year-olds. Judging from special operations experience, “the optimum age for a close combat soldier is between 28 and 32,” Scales said. “What if we recruited soldiers for close combat at the beginning of their second tour,” he said, after they’d already proven themselves — and gained useful skills — in a less brutal job such as radioman or medic?

Once you select these elite infantry, you have to keep them. Time to train together contributes both to skills — practicing “team plays,” not just individual skills — and to morale — building the “band of brothers” loyalties that motivate troops to fight.

“Units have to stay together a long period of time in order to be bonded,” Scales said. “Think about a squad that stays together four or five years.”

That infantry squad should also be manned at more than 100 percent strength, Scales argued, so it can take casualties and still have enough manpower. If the optimum infantry squad size is nine, for instance, assign 11 troops to each squad. The assault squads on D-Day were overmanned this way, for example, and the Rangers do something similar today. “The only way to maintain combat proficiency when the bullets start to fly is to go into combat over-manned,” Scales said.