Back in 2015, researchers in Spain created a tiny magnetic wormhole for the first time ever. They used it to connect two regions of space so that a magnetic field could travel ‘invisibly’ between them.

Before you get too excited, it wasn’t the kind of gravitational wormhole that would theoretically allow humans to travel rapidly across space in science fiction TV shows and films such as Stargate, Star Trek, and Interstellar, and it wouldn’t have been able to transport matter.

But the physicists managed to create a tunnel that allowed a magnetic field to disappear at one point, and then reappear at another, which is still a pretty huge deal.

A wormhole is effectively just a tunnel that connects two places in the Universe. So far scientists have simulated this process, but are nowhere near creating a gravitational wormhole, as it would require us to create huge amounts of gravitational energy – something we don’t yet know how to do.

But what physicists are good at is generating and manipulating electromagnetic energy, and so the team from the Autonomous University of Barcelona decided to see if they could build a magnetic wormhole in the lab instead.

In 2014, they managed to create tunnels that directed magnetic fields from one place to another, but these weren’t true wormholes because they didn’t keep the magnetic field undetectable or magnetically ‘invisible’ while it was travelling inside the tunnel.

This is something they managed to overcome in 2015, by using metamaterial and metasurfaces to build their tunnel.

That meant that they could make the magnetic field from a source, such as a magnet or an electromagnet, appear at the other end of the wormhole with no trace of it in between.

This created the illusion that the magnetic field must be travelling through some kind of extra dimension. Oddly enough, it also meant that an isolated magnetic monopole – a magnet with only one pole, North or South – appeared randomly at the end of the tunnel.

“This result is strange enough in itself, as magnetic monopoles do not exist in nature,” a press release explained at the time.

“The overall effect is that of a magnetic field that appears to travel from one point to another through a dimension that lies outside the conventional three dimensions.”

To be clear, the wormhole in this experiment isn’t really invisible to the human eye – it’s a sphere made up of an outer ferromagnetic surface, an inner superconducting layer, and then a ferromagnetic sheet rolled into a cylinder internally.

But the way that it’s been designed means that it, and its contents, is totally undetectable magnetically.

In other words, it’s magnetically invisible from the outside, but to us it looks more like this: 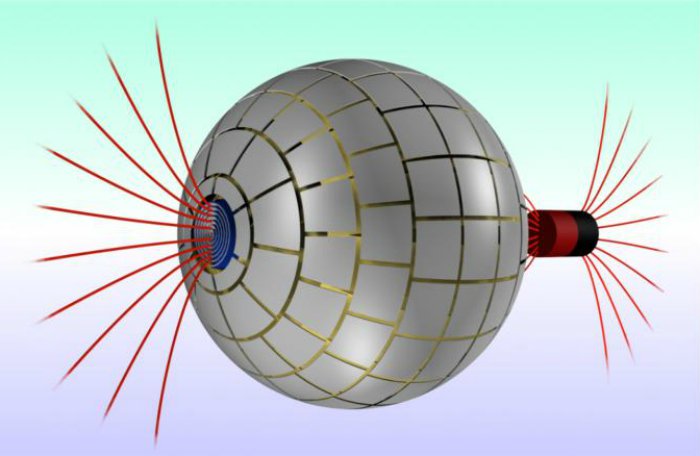 And while the tunnel isn’t anywhere near to the kind of wormhole that would take us across space, it does have a lot of features in common.

“[It] changes the topology of space, as if the inner region has been magnetically erased from space,” lead researcher Àlvar Sánchez explained.

The research has potential practical applications in areas that use magnetic fields – for example, it could lead to the creation of MRI machines that don’t require people to lie inside the claustrophobic machine, or more targeted MRI scans.

But importantly, it also teaches us more about ways we can tunnel our way through space – an endeavour that holds countless exciting possibilities.

The research was published in Scientific Reports.