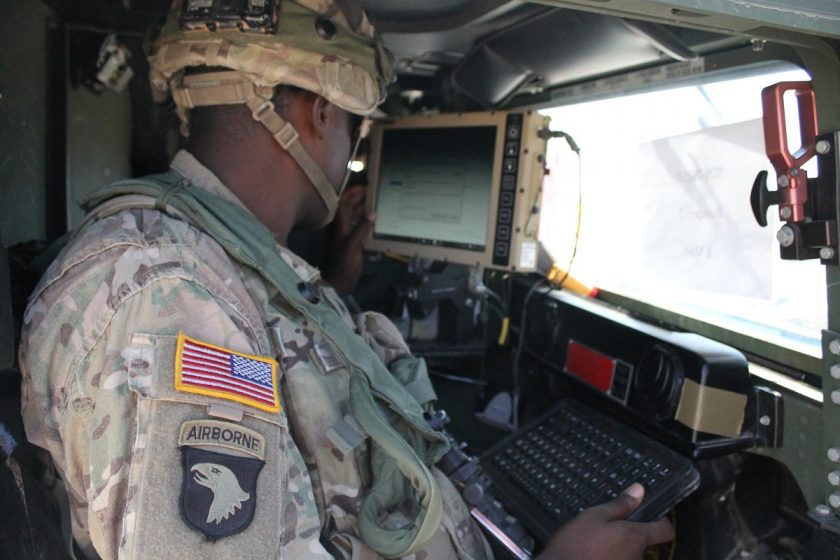 Army leaders used the AFCEA Army Signal Conference in Springfield, Virginia this week to emphasize that the service wants to change is the way it buys and equips forces from an IT and communications perspective.

The Army recently finished its high profile review of the tactical network in which it charted a “halt, fix, pivot” approach for the future.

While officials have maintained the tactical network as a whole worked as designed, with the return of so-called great power competition, WIN-T is no longer what the service needs for the future.

“When it comes to communications, the network, WIN-T was built for a specific fight – the [counterinsurgency] fight where we knew or believed or we assumed that we would own the electromagnetic spectrum,” Lt. Gen. Paul Ostrowski, principal military deputy to the assistant secretary of the Army for acquisition, logistics and technology, said March 7. “So guess what? Crimea happened. And what did we learn? We learned that the Russians had studied us. they understood our tactics, our techniques, or procedures over the last 16 years of war and they did exactly what we would do – they found, fixed and finished. To devastating effects.”

So what is the Army doing? For months, officials have hinted that large programs of record within IT and communications might be a thing of the past because it is often difficult to insert technology refreshes and advancements.

“The Army has been reviewing all current and potentially new programs that support the network,” Lt. Gen. Bruce Crawford, CIO/G6, told C4ISRNET via a written emailed response. “As we move forward in modernizing our network we are pursuing a ‘modernization in service’ approach, a separate funding line not associated with a program of record, which provides more flexible funding and enables us to insert evolving technology into our network while simultaneously operating on the network.”

Other officials at the conference pointed to tangible changes the Army has taken in this regard.

“Now [the PM tactical radio] is a capability set that, theoretically, different vendors could enter in and out of to provide a service, capability,” Brig. Gen. Brian J. Mennes, director of force management for the Army’s deputy chief of staff, said March 6.

“If I create a big program thinking I’m going to buy all those radios for the Army, that puts me in a high acquisition category,” he added. “If you can keep the lines shorter, shorter marriage of commitment, I think we can iterate.”

One phrase that has emerged in Army acquisition circles over the past few months is the term “standards of record.”

We’re “thinking about programs a little differently. Not necessarily thinking about them as programs of record, but standards of record,” Maj. Gen. John George, director of force development in the office of the Army’s deputy chief of staff, said March 7.

Crawford, has also used this phrase in the past noting “This idea of a program of record is going to migrate to a standards-of-record kind of mindset … That allows us to take advantage of open architectures. It allows us to take advantage of other commercial and industry standard vice this program of record mindset that we’re going to field for 35 or 40 years in our formations.”

George likened the standard of record mindset to a highway. This means the Army would establish rules, everyone would understand what the rules are, what vehicles can and can’t drive on the highway and they must have the police to enforce the standards.

The Army’s solution is to begin buying smarter to both allow greater flexibility to insert new technologies when possible and field the latest and greatest to units that need it.

“We figured out it wasn’t just what we were buying but how we were buying that caused us to be in this situation that we’re in,” Crawford told the conference March 6. “I don’t believe as an institution we actually had our sensors in the right places to be able leverage the might of commercial industry.

“Absent knowing what technology is available, absent a clear eyed and sober view of the playing field to understand what was in the art of the possible what did we do? We bought as much technology as quickly as we can via operational needs statements and we got it in the hands of soldiers.”

And therein lies the problem, he said.

The Army is undergoing a series of modernization efforts, not the least of which includes how it buys and fields network, communications and mission command capabilities.

“We’ve been on a modernization vacation,” Lt. Gen. Paul Ostrowski, principal military deputy to the assistant secretary of the Army for acquisition, logistics and technology, told an audience before the AFCEA Army Signal Conference in Springfield, Virginia March 7. “The culture of the Army is changing.”

The recent budget request for fiscal 2019 provides an opportunity to “get well,” he said

Part of this change relates to doing business differently and procuring systems on faster timelines to keep pace with commercial technology. Some Army leaders have noted in the past that the current acquisition structure is not optimized to take advantage of gains in the commercial world.

Ostrowski charted a familiar path: bring in more commercial companies, leverage non-traditional acquisition mechanisms such as Other Transaction Agreements to get away from Federal Acquisition Regulation, or FAR-based contracts, increase prototyping and experimentation.

In terms of specifics, Ostrowski pointed to the new cross functional teams the Army established that line up with the chief of staff’s six modernization priorities and are designed to shrink acquisition and fielding timelines.

These teams, he said, are designed to draw the requirements process down to months as opposed to years.

Folks open their phones and look at texts or emails from the night before, which is the data aspect of a radio, make a call to family or friends, which is the voice aspect, watch television through an application, which is full motion video aspect, all done in a WiFi environment that can seamlessly transition from WiFi to 3G or 4G.

“Why is it that we can’t do the same thing for our soldiers,” he asked. “How many countries are putting in landlines? Nobody. Why? They go through cell towers. So the question is who is going to create the first transport layer that the Army can use that goes beyond cell towers?”

This future capability would have to provide radios to tap into all the available networks seamlessly to include small satellites or some other innovative solution to get after the ability to reliably communicate seamlessly anywhere in the world anytime.

“We have to, at the risk of failure, get after the next generation transport layer so that we’re not caught flat footed and we’re ready for the next fight,” he said.

Ostrowski also said he needs help from Congress in the way of flexibility in funding “in an environment where IT is exploding in terms of the capabilities being provided.”

OTAs are also helping in that they get around the FAR and allow for greater direct dialogue with industry as opposed to months of written correspondence that “gets you nowhere” in the current FAR-based system.

“We need some first downs. We want the touchdown, but you don’t get there very often unless you make some first downs,” he said in regards to near and mid-term solutions the Army is chasing, acknowledging they can’t get to the end state right away, they must address the pressing operational needs in the interim.

Referencing another Army buzzphrase – adapt and buy – Ostrowski said the Army has looked at what has been done across other services and other executive branch agencies to see what they can take advantage of. The service found some capabilities in the special operations community that it liked and adapted.

There’s also been opportunities with the Security Force Assistance Brigades, a new, specialized brigade within the Army designed solely to conduct advise and assist missions overseas, to “bring that capability in, to experiment with it, to continue to prototype it and trying to get after fixing what we currently have,” he said.

The Army put a “new capability in their hands, played with it, perfected it along with the 82nd Airborne and next thing you know we’ve got some potential fixes,” he said adding this is “exactly what we need to do.”

The service is also looking into anti-jam antennas, Ostrowski said.

“Some of these things are reachable now and can be rolled in – potentially and perhaps – to our objective network,” he said.

Another Army leader at the conference indicated progress might really begin to take place in the early 2020s.

“You’ll see in that that there’s a balance beginning to occur between readiness end strength and modernization around the 2022 timeframe,” Maj. Gen. John George, director of force development in the Army’s deputy chief of staff G8. “If you think about the future as we approach ‘21, ‘22, that’s an opportunity of us to really make the turn and start modernizing our force with leap-ahead technologies.”