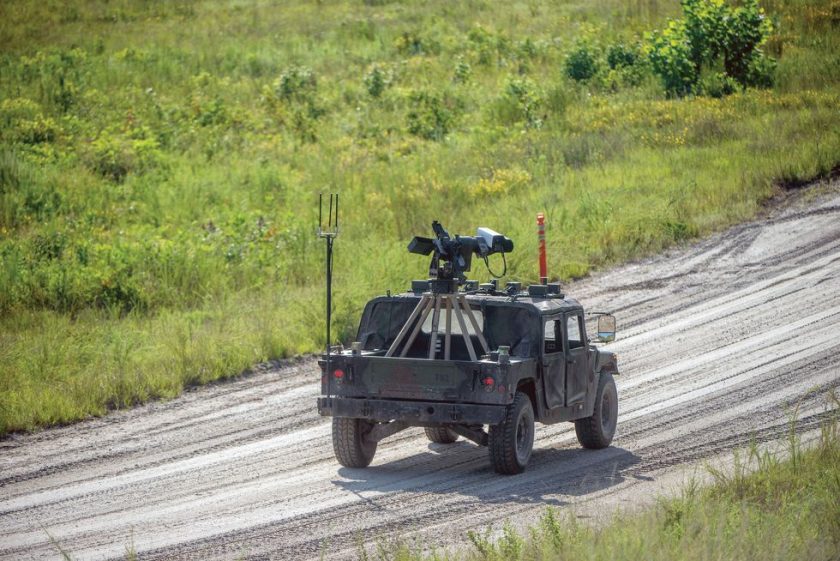 The U.S. Army is now sending a robotic Humvee to the gun range to see if an autonomous vehicle can accurately engage targets with its remote-controlled machine gun. The armed Hummer is part of the “Wingman” program to develop vehicles that can tag along with U.S. Army forces and do the most dangerous jobs. The Humvee is also testing a new electrically fired machine gun designed to deliver firepower on the battlefield.

The Army has been keen to join the autonomous robotic revolution sweeping the American Armed Forces, but progress has been slow compared to the other services. Unlike the Air Force and Navy, the Army’s operating environment is tougher for autonomous systems. The ground—with its mud pits, trenches, arid deserts, and cities—presents a much more complex range of environmental conditions to master compared to the sea or the air.

Right now, two Humvees make up the Wingman experiment: a manned M151 Humvee and the unmanned M1097 Wingman vehicle. Inside the crewed vehicle, three soldiers are assigned to take over key Wingman tasks. One of them handles Wingman’s target detection and laser range-finding, the second drives the vehicle if necessary, and the third pulls the trigger on the Wingman’s gun.

One issue with the Wingman is armament. A weapon on an autonomous vehicle needs a high rate of reliability because it can expect less TLC and maintenance than weapons fired by humans. Previous Wingman weapons included a remote-controlled M2 .50-caliber machine gun and M240 7.62-millimeter machine gun. Gas powered weapons such as the M2 and M240 jam without regular maintenance, so the Army went looking for an answer.

The solution: the Advanced Remote/Robotic Armament System (ARAS). ARAS is a complete 7.62-millimeter machine gun that weighs 410 lbs. including the mount and 1,500 rounds of ammunition. ARAS has a heavy, fluted barrel that can survive burning through its entire ammo supply in less than five minutes. The gun is capable of 360-degree fire, 90-degree elevation and -30-degree depression. The system can load a fresh ammo pack in just six seconds. ARAS is paired with the Autonomous Remote Engagement System, which uses vision-based automatic target detection and user-specified target selection.

According to popularmechanics.com, Wingman may evoke fears robots running amuck, blowing people away without regard to friend and foe, and the Army acknowledges that.

“You’re not going to have these systems go out there like in ‘The Terminator’ [film],” said Thomas B. Udvare, deputy chief of the (Wingman) program. “For the foreseeable future, you will always have a soldier in the loop.”