Two electric power stations in Russia have been sold for the purpose of cryptocurrency mining, the Kommersant newspaper reported, citing sources. It is the first such deal in the country.

The two power stations are in Perm Region, on the western slopes of the Middle Ural Mountains, and in the neighboring Republic of Udmurtia. The facilities will be used to create a data center and a center for cryptocurrency mining, the newspaper reported. The stations were reportedly sold for about 160 million rubles (about US$3 million).

The reported new owner of the power stations, businessman Aleksey Kolesnik, has indirectly confirmed the acquisition, but said that cryptocurrency mining will only be possible after Russia adopts the relevant legislation.

Russia currently has no laws on digital money. The government is mulling over how to best regulate cryptocurrencies, with Deputy Finance Minister Aleksey Moiseev suggesting in December that mining bitcoin and other forms of online money would be illegal, but buying them or trading them would remain within the law.

There is no single opinion about cryptocurrencies in Russia. Some call them money surrogates, and their issuance is of concern as the turnover of the currency in Russia is a criminal offense. Other deputies say that cryptocurrencies are a way of bypassing Western sanctions and have even suggested building a town for cryptocurrency mining.

President Vladimir Putin has ordered the government to create legislation governing the status of bitcoin, other cryptocurrencies, mining, and initial coin offerings, as well as defining everything that relates to digital money, by July. 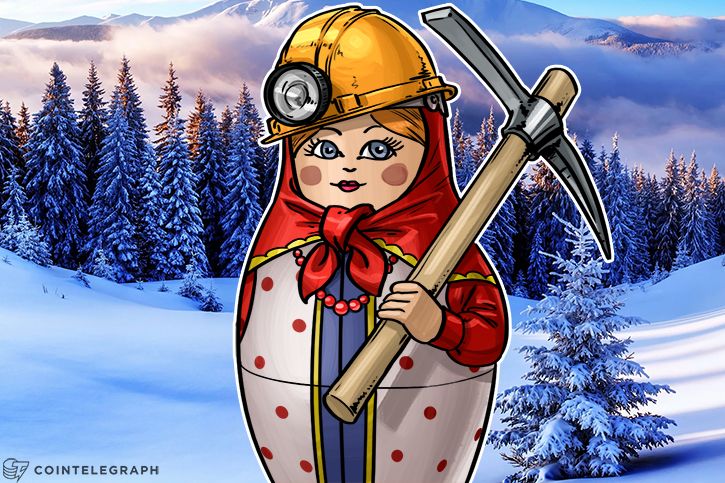 China has long been a cryptocurrency mining stronghold due to low power tariffs and many large mining operations have set up shop nearby power stations.

It seems this theme is spilling over to Russia, where the first instance of power stations being bought by investors to house cryptocurrency mining operations is being reported.

According to RT, Russian businessman Aleksey Kolesnik has all but confirmed buying two power stations for cryptocurrency mining operations in the future – citing a report from local newspaper Kommersant.

The two power plants based in Perm and Udmurtia, regions roughly 1,200 km East of Moscow, will be refurbished into a data center and mining operation.

Kolesnik paid around $3 mln for the two power stations – although its uncertain if and when the plans to start mining cryptocurrency will go ahead.

The credibility of the project and its future is in the hands of the Russian government, which has made headway in its outlook on cryptocurrencies in the country.

Late last week, local media reported that Russia’s finance ministry had officially drafted a bill that would legalize the trade of cryptocurrencies on regulated exchanges in the country.

This also comes after President Vladimir Putin proposed the creation of a multinational cryptocurrency that is intended to be adopted by BRICS and EEU members.

It is expected that Russia will legalize and regulate cryptocurrency trade in the country by July 2018, while mining and trading crypto will also be taxed.

Russia certainly hasn’t wasted time moving to establish formal regulation of the use of cryptocurrency in the country over the past year.

While miners and traders have gone about their merry way, the government has played catch-up over the past 12 months, especially after Bitcoin’s meteoric rise in value.

The past month has not been kind on the cryptocurrency market, with wild volatility an everyday occurrence. However, that has not stopped the massive influx of users looking to trade cryptocurrency.

Having giving clarity in the direction it wants to take in December, cryptocurrency traders and miners in Russia know what to expect – with a ban ruled out completely.

It wouldn’t be surprising to see more big mining operations pop up in the country as demand for cryptocurrency grows – which inevitably puts more strain on the network. 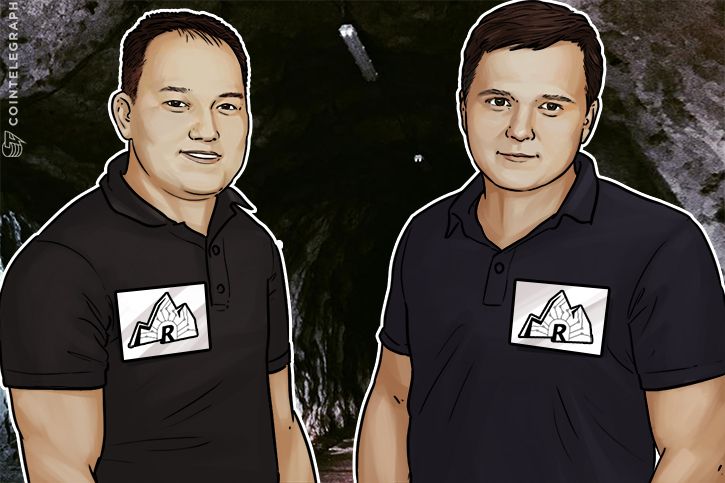 Thanks to some of the cheapest electricity around, the fact that their mining farm stays naturally cold, and that it is based in a former Soviet military bunker, Ice Rock Mining think they have cracked the perfect space to mine.

However, the company is looking to be more than a self-contained super mine, they are offering investment opportunities, as the Soviet Bunkered farm launches an ICO.

A meeting of old and new technology

The Soviet bunker, in Almaty, Kazakhstan, built during the cold war of 1949-1991, was a safeguard in case of potential nuclear war. However, with that threat buried in history, Ice Rock Mining is looking to utilize the historic space for new-age technologies.

Seeing as the cave sits at a constant temperature of around 12 degrees celsius, and maintains its own ecosystem, Ice Rock believe that it is the perfect space to build a cryptocurrency mining farm.

They claim there is space for over 4,600 ASIC rigs in the 1,200 square metres of subterranean tunnels, and because they are supplied by a nearby hydroelectric power source, their price per kilowatt is low. Ice Rock claim they are only paying three cents per/KWH.

Overall, the choice of location for the farm means lower costs for mining, which Ice Rock says they can convert into bigger earning margins for their investors.

Through its ICO Ice Rock is trying to offer options to purchase mining capacity to people through standard and tailored packages. This project is aiming to offer ‘turn-key’ mining services through their cloud mining service.

It is because their mining set up is so low that Ice Rock believes clients can benefit with the cloud mining industry. However, there is also an option for investors to simply buy into the ROCK token and hold onto them until the buyback period starts.

Ice Rock Mining is looking to provide a niche in the mining market, as the industry is difficult for many keen individual miners to break into. Home mining, especially of Bitcoin, is expensive and difficult, and setting up an individual farm is a full time, large investment.

Ice Rock aim to use the power of Ethereum’s smart contract on the ERC-20 token in order to effect an investment option for its users, as, with their investment through the ICO, the user is essentially buying into a mining operation.

Dividends and growth can be paid out along the Ethereum Blockchain as a ROCK token, with the mining farm churning out supposedly some of the lowest cost returns on a mining investment.

Using the ROCK token, Ice Rock allows users to buy certain packages, and the packages can allow users a part of the mining operation which has the benefit of no rent, no cost of cooling, and apparently cheap electricity.

What Ice Rock is accomplishing is seemingly taking the costs of mining, and mitigating them through the use of an ideal underground space. Electricity, cooling, even rent is negated in their farm, and by allowing the investor to be a part of that, the margins naturally have to be bigger.

By turning the mining farm into an ICO, there’s the added crypto-investment of cashing in on Blockchain tokenization. Investors can buy into ROCK tokens and use them like any other, selling when they see fit, or they have a secondary option to grow their capital by getting involved in different mining packages with Ice Rock.

A look inside ASICMiner’s cooling plant 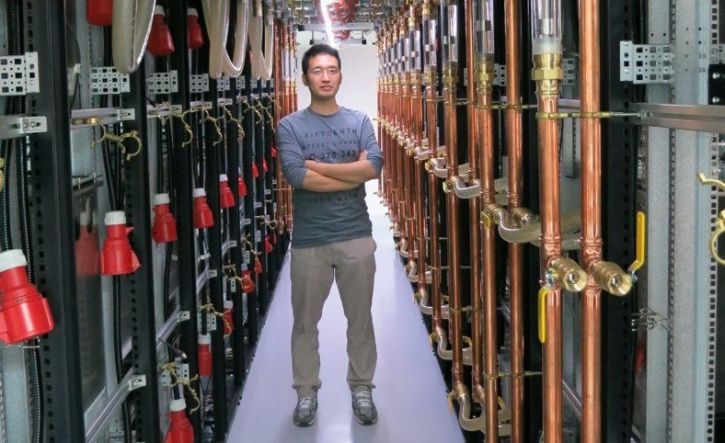 Xiaogang Cao, a Chinese journalist, took up ASICMiner’s invitation to tour its Hong Kong facilities, where its immersion cooling mining facility is located. Xiaogang then wrote about the experience on the Bitcointalk.org forum and included photos.

Xiaogang’s post says that the mining facility is in the middle of an industrial zone. Inside are racks not unlike what you would find in a typical data center, but here, “Each rack contains three sealed liquid glass tank[s], blades are all operating quietly in the liquid,” he writes. He said what was so strange was how quiet all the machinery is.

“If [you] turn off the air-condition,” he writes, “this place is even more quiet than a library.”

Xiaogang’s host told him that this kind of technology has long been in development. The plant itself was built in August of 2013.

Immersion cooling does essentially what it sounds like, it keeps something cool. A given electronic component is immersed in a liquid that has cooling properties sufficient to be a thousand times more effective at removing heat than just air. For intense Bitcoin mining operations, this is a huge boost because mining hardware gets hot fast.

Even better, an immersion cooling facility such as ASICMiner’s will be able to accommodate future technologies and hardware, necessary in a space where innovation is so rapid.

An ASICMiner representative told Xiaogang that the cooling technique used in their facility is one of the most advanced in the world. Still, he says only a portion of the mining facility is even operation, with many racks empty.