A critical step to quantum internet.

Scientists just took a big step towards the goal of quantum computers, and even a quantum internet to connect them, after successfully using photons to transfer quantum information between a cold atomic gas and a solid crystal.

Passing data between these two “nodes” or types of storage shows that it should be possible to build hybrid quantum computers that mix various nodes together, making them more stable and practical to use.

A hybrid system like this would potentially combine the benefits of each type of storage offered by the nodes, according to the team from The Institute of Photonic Sciences (The Institut de Ciències Fotòniques or IFCO) in Spain.

“It’s like having nodes speaking in two different languages,” says one of the researchers, Nicolas Maring.

“In order for them to communicate, it is necessary to convert the single photon’s properties so it can efficiently transfer all the information between these different nodes.”

No one has managed to pass quantum information between two different types of node before, as they typically function at different bandwidths and different wavelengths.

Getting a photon between them without interference and with a strong enough signal has proved to be incredibly tricky.

For this experiment the researchers used a photon encoding technique called time-bin encoding, which is very well suited to communicating qubits and preventing interference – as here – but not so great at allowing qubits to interact with each other.

In this case the researchers started with a laser-cooled cloud of rubidium atoms, generating a qubit encoded in a single photon with a very narrow bandwidth and a wavelength of 780 nanometres.

That was then successfully passed over to the receiving node, a crystal doped with praseodymium ions, by converting it to a wavelength of 606 nanometres.

Between the sending and receiving node, the photon was converted again, to a wavelength of 1552 nanometres, in order to prove that this experimental network might one day be integrated with our current telecommunications infrastructure.

The qubit was held for around 2.5 microseconds and retrieved with very high fidelity.

These qubits are the building blocks of quantum computing, able to be in superposition – two states at once – rather than computer bits of today, which are fixed as either 1s or 0s.

Once we figure out how to manipulate these qubits reliably and accurately enough, the processing leaps should be huge. 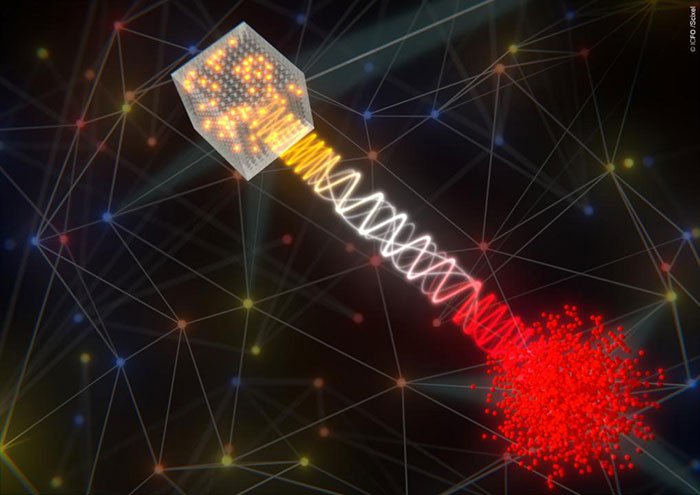 That day is still a long way off, but we now know it’s possible to build hybrid quantum computers that can effectively send data across cables that are already in place.

And because different types of nodes are better at different tasks – like encoding in the case of a gas, or storage in the case of a crystal – hybrid networks are an important avenue for further exploration as we try and harness the full power of quantum computing.

“Being able to connect quantum nodes with very different functionalities and capabilities and transmitting quantum bits by means of single photons between them represents an important milestone in the development of hybrid quantum networks,” says one of the researchers, Hugues de Riedmatten.

The research has been published in Nature.