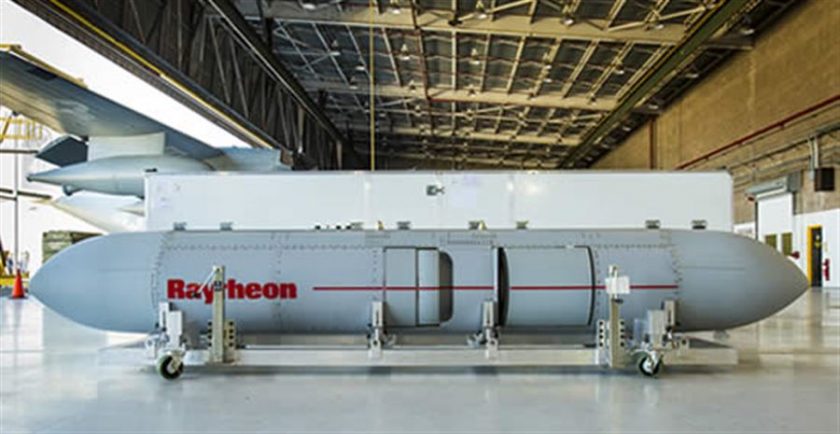 Despite the performance of the venerable ALQ-99 — the legacy standoff jamming pod mounted to the Navy’s EA-18G Growler aerial electronic attack platform — the nature of the threats today are such that the pod needed a substantial upgrade.

The upgrade is so significant, the Navy is awarding the contract in three “bands” that will lead to multiple pods under the “Next-Gen Jammer” (NGJ) development program.

While the Navy first set out awarding each phase under increments 1, 2 and 3, it has moved away from this designation because “it assumes you’re building on the last” version, Rick Diamond, senior manager, electronic warfare business development at Lockheed Martin, told reporters during the Association of Old Crows Symposium in Washington, D.C. “Each pod is separate.”

The order of development for the pods will be “Mid-Band (Increment (Inc) 1), Low-Band (Inc 2), and the future High-Band (Inc 3),” which “was determined based on criticality of current and emergent threats,” a Navy spokesmen told C4ISRNET in response to written questions. “The NGJ full system capability is comprised of these three stand-alone programs, Mid-Band, Low-Band and High-Band, each of which covers a different frequency band and addresses a variety of adversary systems.”

NGJ has been described by senior leaders as 10 times more powerful than the legacy jammer with roughly quadrouple the number of assignments it can handle.

Raytheon, who is the prime contractor for the mid-band phase — now officially designated as AN/ALQ-249(V)1 — recently completed its critical design review for the pod, which is slated for 2021 initial operational capability, Dan Theisen, director within the electronic warfare systems mission area at Raytheon Space and Airborne Systems, told C4ISRNET in an interview over the summer.

Theisen added that all the production aspects for the mid-band will be delivered ahead of the Marine Corps’ retirement of the EA-6B Prowler, which the Navy already retired making the Growler the premier platform of the future.

“Unlike the ALQ-99, which was fielded on the EA-6B Prowler and transitioned to the Growler, NGJ mid-band is slated for the Growler currently and should be delivered prior to sun-setting of that aircraft, which will be several years after that,” he said.

The Growler’s capabilities tie into the joint force, Theisen said, noting that its primary mission is to suppress enemy integrated air defense systems enabling Navy strikers to ingress and prosecute missions with reduced risk to strike aircraft themselves.

The next phase — low-band — will address capability gaps in this area as they pertain to airborne electronic attack, as well as shortfalls in scalability, flexibility, supportability, interoperability, availability and capability of the legacy jammer, according to FY18 budget documents.

The low-band capability will “deliver significantly improved radar and communications jamming capabilities with Open Systems Architecture that supports software and hardware updates to rapidly counter improving threats” contributing “across the spectrum of missions defined in the Defense Strategic Guidance to include strike warfare, projecting power despite anti-access/area denial challenges, and counterinsurgency/irregular warfare,” the documents stated.

The low-band phase is still under acquisition with an anticipated award in July 2018, Diamond said.

Theisen said Raytheon is competing for the low-band as well.

Diamond noted that Lockheed, while it’s competing for the low-band, did not originally compete for the first mid-band phase.

“Just as we’ve been growing our EW business and our architecture approach has been evolving from shipboard maritime to be a little bit more adaptable, so we’re leveraging our growth in EW to expand our wings,” he said, regarding the change of strategy.

When asked if the change also had to do with the specific band in the second increment, Diamond explained they’ve partnered to fill the gaps they think they have declining to disclose who they’re partnering with on the low-band capability.

Diamond also explained that while Growlers could fly with all three pods — low, mid and high — typically what will happen is there will be several aircraft flying with different configurations addressing the different missions as to not load down the aircraft too much.

While the Navy has not yet funded the third, high-band portion yet, Diamond said they will definitely look at it.