PIVOT: 21 Inc, once a maker of bitcoin mining hardware, is rebranding to emphasize its new focus on using cryptocurrency to power a social network.

Effective today, the startup has changed its name to Earn.com to drive home the message users can get paid for answering emails and completing tasks, according to a company blog post. The rechristened startup also confirmed it’s on track to issue a token that would replace bitcoin as the currency it uses to incentivize people to join the network by the year’s end.

Separately, the company notified customers last week that it had discontinued support for the Bitcoin Computer. The pocket-sized mining device, which initially retailed for $400, was once 21’s flagship product.

Taken together, the moves underscore how far one of the best-funded startups in the blockchain space has moved from its roots.

In an interview with CoinDesk, CEO Balaji Srinivasan said the new name gives people “an easier way to understand the purpose of the company.” He described Earn.com as “the first commercial social network,” combining elements of LinkedIn and Amazon’s Mechanical Turk.

Specifically, users can make money in several ways, according to the company.

They can create a public profile for receiving paid messages; join lists of people with similar skills (e.g. Python programmers) to receive “microtasks” such as completing surveys; or set up an autoreply on their email encouraging senders they don’t know to pay for responses (with a whitelist, so real acquaintances can be spared the request for money).

As for the senders of mass emails, who aren’t used to paying for the privilege, Earn.com claims they can get much higher response rates when recipients have a monetary incentive to write back.

Stepping back, 21 raised $116 million from a group of prominent investors in multiple rounds revealed two years ago, when it was still squarely in the hardware space. The valuation reflected 21’s early success in bitcoin mining, but that business has since grown more competitive, and Srinivasan (a board partner at VC firm Andreessen Horowitz who joined 21 as CEO in 2015) has been steering the company toward a software model.

According to Srinivasan, the company has plenty of capital left, and fundraising is not the purpose of the upcoming token issuance.

“It’s not an ICO,” he said emphatically. Tokens will be exchanged for “labor,” not capital, he explained.

Rather, the Earn.com token launch is meant to encourage users to join the network sooner. Users earn tokens just by signing up for the platform and getting verified, and the token reward for doing so will be cut in half each time Earn.com’s user base doubles. (After receiving that reward for joining, users will be able to earn additional tokens by answering emails or doing tasks, the way they earn bitcoin currently.)

To give the asset scarcity, no tokens will be created after the launch, and supply is capped at 21 million, of which 54 percent will be reserved for users, according to the firm. Another 30 percent will be allocated to Earn.com employees and backers, and the remaining 16 percent will go to outside researchers and developers.

Aside from their function as an internal currency to compensate users for their work, the tokens will also serve as an API key for programmatic purchases, according to Srinivasan. And since they are ERC-20 tokens, they will be eligible for listing on exchanges, giving users a way to cash out, including in bitcoin.

An end, and a beginning

In addition to being the company’s first day as Earn.com, Friday marked the “end of life” for server-side support of the Bitcoin Computer, 21 command line interface (CLI) and API marketplace, according to the email sent to customers last week.

Despite the wind-down, the email deemed the hardware product a success – because, it said, one of the tutorials published when 21 released the device grew into the current get-paid-to-answer-emails application.

“Going forward, we’re going to be putting all our energy into that product and the corresponding token launch … because we think the ability to earn digital currency by replying to emails and completing tasks will be one of the most useful applications of the blockchain,” the note said. 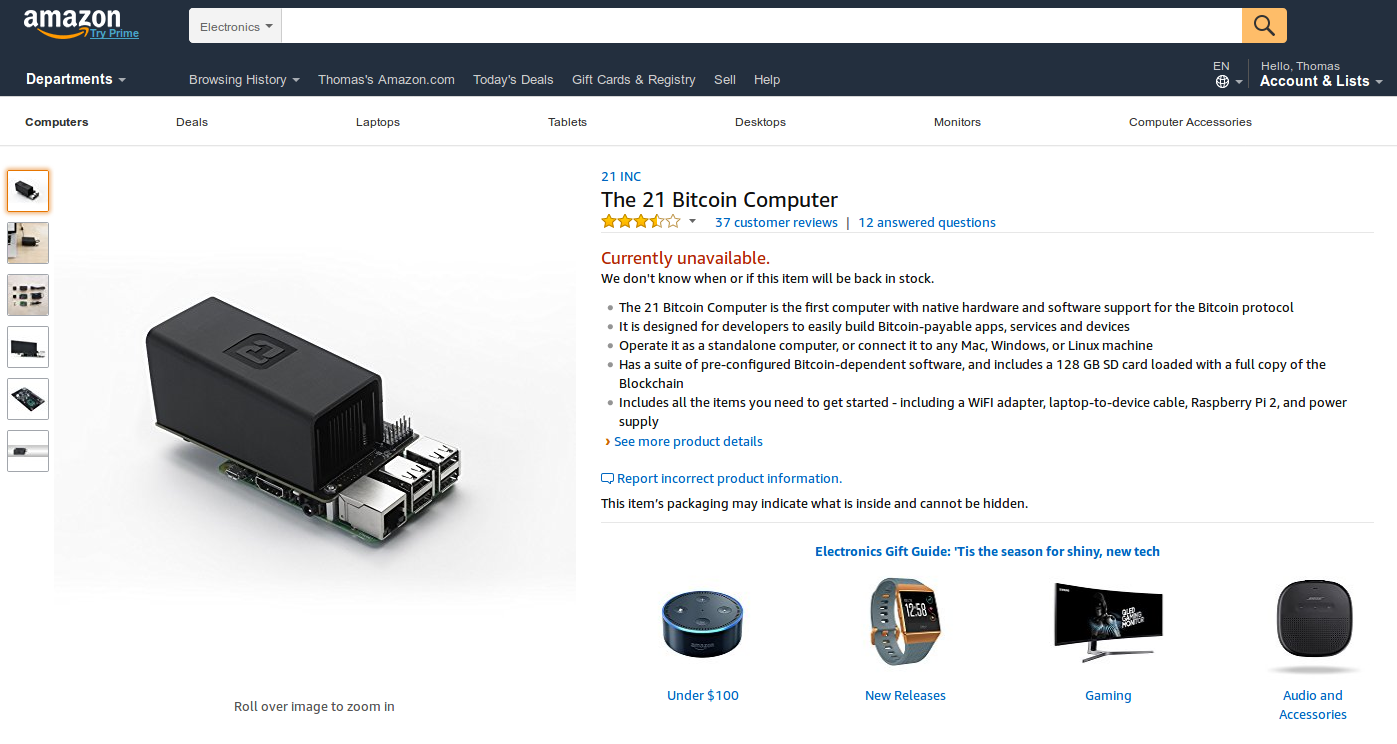 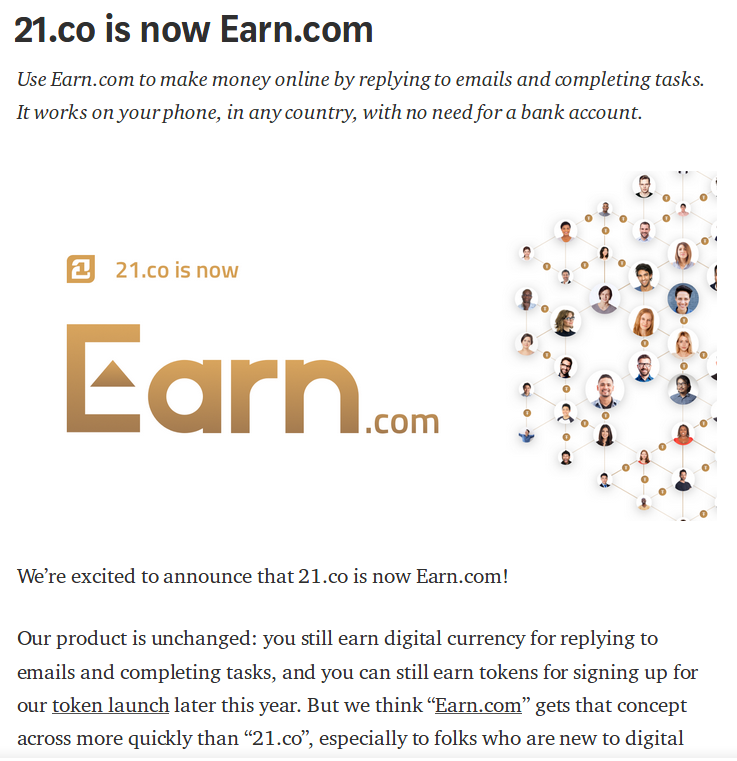