Blockchain development is the now second-hottest skill in the job market today, growing more than 200% since this time last year.

Blockchain developers now rank second among the top 20 fastest-growing job skills, and job postings for workers with those skills have more than doubled this year.

Taking second fiddle only to robotics specialists, blockchain technologists are advertising their services for as much as $115 per hour, according to Upwork, an employment site that specializes in freelance workers.

Next in the list of fastest-growing job skills is another blockchain-related topic: Bitcoin cryptocurrency developers. 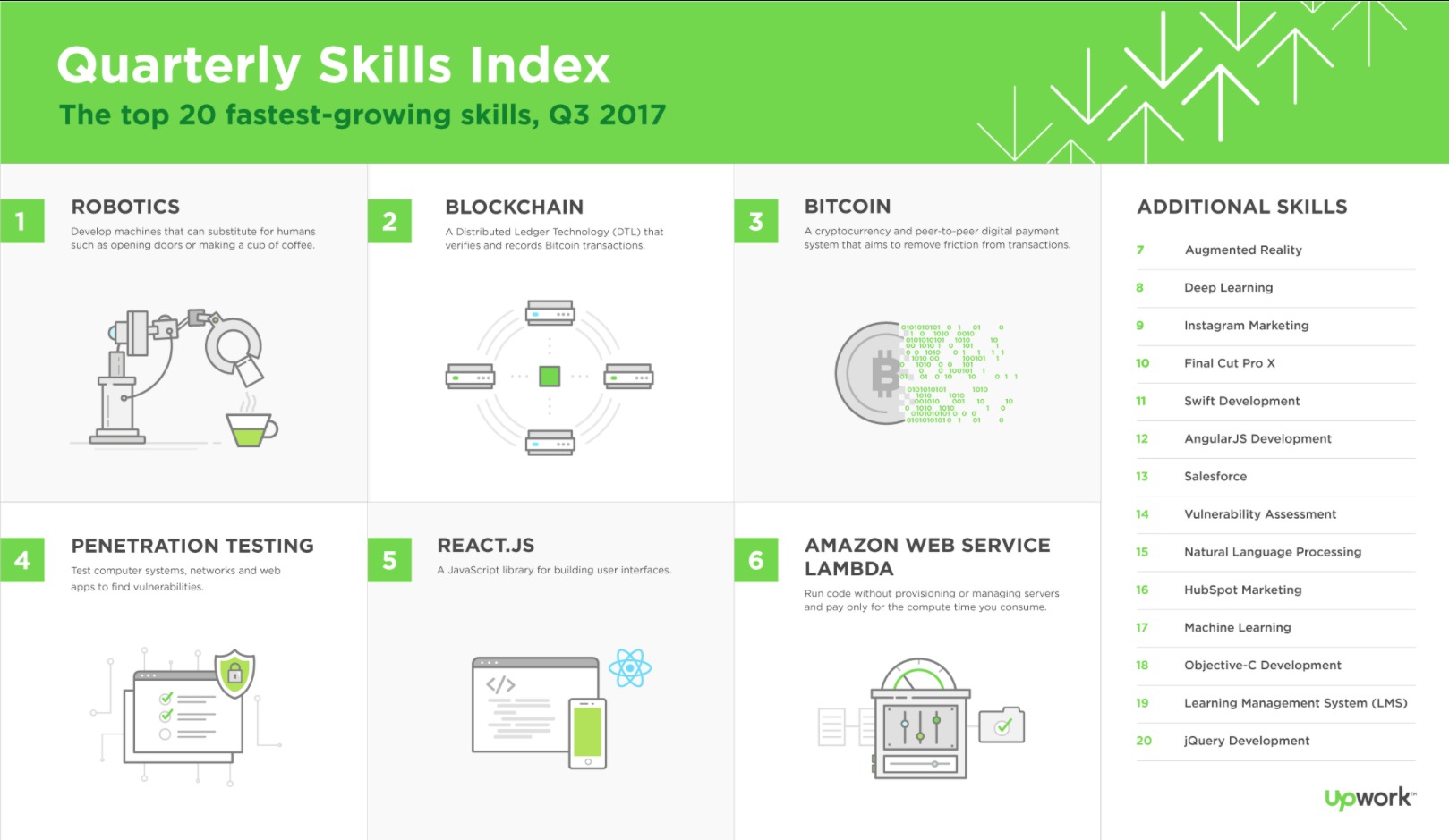 The 20 fastest-growing freelance skills in the third quarter all saw more than 100% year-over-year growth, while the top 10 grew more than 200% compared to the same time period in 2016, according to UpSkill.

New research from job data analytics firm Burning Glass Technologies also found that between 2016 and 2017, there was a 115% increase in job postings for those with  blockchain skills. There are now nearly 4,000 blockchain-related job postings, according to the analytics firm’s research. 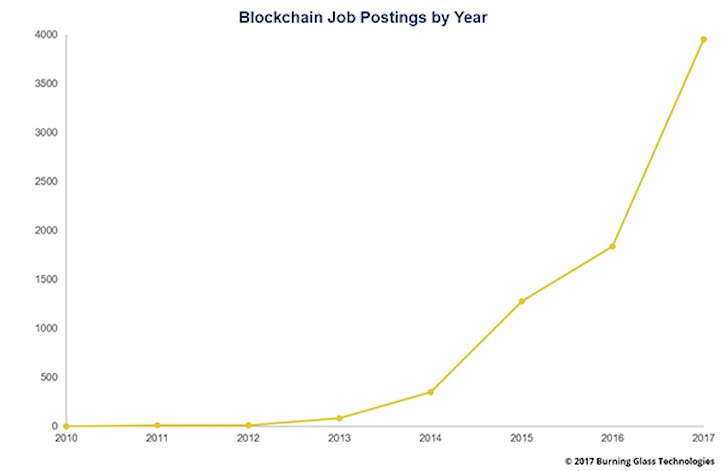 It’s not hard to imagine blockchain as a “disruptive skill” that is both fast-growing and hard to find, according to Burning Glass Technologies. While the technology and hiring patterns are in their early stages, it might be a good idea for employers to start figuring out where they will find blockchain talent, “even as they are still considering how the technology will change their business.

“Because of its connection with ‘cryptocurrencies,’ blockchain is associated with finance, and major banks like Liberty Mutual, Capital One and Bank of America have posted openings,” Burning Glass Technologies said in its blog. “There are also companies devoted to building blockchain applications, like Consensys Corporation. But the demand for blockchain is much broader, including major consulting firms like Accenture and Deloitte and technology companies like IBM and SAP. This is additional evidence that the business world is starting to take blockchain seriously.”

Cryptocurrency market capitalization has grown in recent years to $172 billion, with bitcoin representing more than half of the total, or $94 billion, according to CME Group.

Enterprises are considering the use of blockchain distributed ledgers to create more efficiency by eliminating the need for central administration, as is required with a relational database.

Enterprises are also asking their tech vendors about blockchain for audit logging and/or verifiable logs, which is viewed as a reliable way of tracking what happened in an organization to satisfy regulatory auditors, according to Zulfikar Ramzan, CTO of RSA Security, a subsidiary of the Dell EMC Infrastructure Solutions Group.

“It’s a very hot topic right now,” Ramzan said in an earlier interview with Computerworld. “We are definitely getting a lot of inbound inquiries around blockchain and its implication within enterprise environments. I think it’s driven largely by the fact that when there’s a new technology out there, to some degree people want to be buzzword compliant with the latest and greatest.”

Banks, however, are moving toward blockchain in droves for its ability to create an open, cross-border system for clearance and settlement of financial transactions. IBM, for instance, has built a new blockchain-based financial service for use as a cross-border currency exchange by several banks.

Earlier this month, IBM partnered with a Polynesian payments system provider and an open-source FinTech payment network to implement a new international exchange based on the blockchain electronic ledger. The ledger will serve 12 different currencies across Pacific Islands as well as Australia, New Zealand and the United Kingdom.

JP Morgan Chase this month rolled out a blockchain pilot program for global payments. The financial services giant said the blockchain-based Interbank Information Network “will enhance the client experience, decreasing the amount of time – from weeks to hours – and costs associated with resolving payment delays.”

Blockchain is an electronic ledger – similar to a relational database – that can be openly shared among disparate users to create an unchangeable record of their transactions, each one time-stamped and linked to the previous one. It can also be used as a private electronic ledger.

Each digital record or transaction in the thread is called a block (hence the name), and it allows either an open or controlled set of users to participate in the electronic ledger. Each block is linked to a specific participant.

Ninety percent of goods in global trade are carried by the ocean shipping industry each year. A new blockchain solution from IBM and Maersk will help manage and track the paper trail of tens of millions of shipping containers across the world by digitizing the supply chain process.

Blockchain can only be updated by consensus between participants in the system, and once new data is entered, it can never be erased. The blockchain contains a true and verifiable record of each and every transaction ever made in the system.

Financial services (see Bitcoin) was the first industry to jump on board the blockchain wagon. Industries such as healthcare and real estate have been quick to explore its use, too, for smart contracts that automatically execute when certain conditions are met and exchange electronic records.

For example, IBM Watson Health and the U.S. Food and Drug Administration are exploring the use of blockchain for secure patient data exchange, including sensitive electronic medical records, clinical trials and data culled from mobile devices and wearables.

Karim Lakhani, a professor of business administration at the Harvard Business School, compared blockchain’s impact to that of the Internet because it creates an open, distributed network that allows anyone to share data in a secure manner.

“Settlement of [stock trades] takes time because you’re going from one system to the next… and it can take days and cost a lot to transfer money across the world and across multiple systems…versus a direct message system on a network,” Lakhani said. “If we have an open, distributed ledger where we can verify transactions taking place and we can build in a programmed logic of how actions take place, that the reduction in transactions costs and increase in the number of new novel applications that can be developed far outweighs the purported benefits of relational database systems.”

“It’s a whole new paradigm for the way information is stored, shared and acted upon,” Lakhani added.