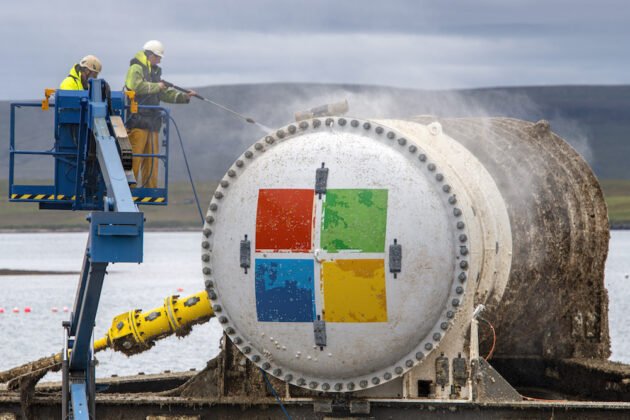 Members of the Project Natick team power wash algae, barnacles and sea anemones off the Northern Isles underwater data center, which was retrieved from the seafloor off the Orkney Islands in Scotland.
(Microsoft Photo / Jonathan Banks)

Two years after deploying a shipping-container-size data center to the depths off Scotland’s Orkney Islands, Microsoft has reeled it back in, scrubbed off algae and barnacles and assessed the findings of the unique underwater project.

The tubular data center, containing 864 servers, was pulled up earlier this summer after sitting on the seafloor at a depth of 117 feet (35 meters). It’s part of the years-long Project Natick, designed to find out whether taking the cloud beneath the sea was a feasible exercise and whether the overall reliability of data centers could be improved by the conditions.

The Natick team said that a variety of factors on land can contribute to equipment failure, from oxygen and humidity, temperature fluctuations and bumps and jostles from people who replace broken components.

Phase I of the project actually began in 2015 with a 105-day deployment in the Pacific Ocean when Microsoft sought to make sure that computers could survive underwater without leaks and so on. The Phase II deployment off Scotland was to show that the data center could be manufactured and deployed in a practical manner.

Microsoft found the underwater data center to be eight times more reliable than those on land, crediting the dry nitrogen air inside the container as being less corrosive than oxygen.

The longterm hope is that underwater data centers could better serve a larger population near coastal cities, because data would have a shorter distance to travel, making for smoother web surfing, video streaming and more.

Read the full Microsoft story to learn more about how Project Natick is also informing decisions around energy use and sustainability in relation to data centers.

Writer and editor Kurt Schlosser covers the Geek Life beat for GeekWire. A longtime journalist, photographer and designer, he has worked previously for NBC News, msnbc.com and the Seattle P-I. Follow Kurt on Twitter or reach him at kurt@geekwire.com