Oracle VP highlights what happens when data leaves your devices.

No SIM card, no browser or app open, only the WiFi connection enabled:
Android constantly transmits: GPS location, time & date, movement, temperature, atmospheric pressure, other smartphones and WiFi hotspots nearby — all to Google, to the tune of 4 megabytes each hour.

During a keynote presentation at the Competitive Carriers Association’s Mobile Carriers Show, Oracle Vice President of Strategic Initiatives Peter Lord provided an illuminating look at the amount and specificity of data sent from Android-based smartphones to Google, which created the pervasive mobile operating system.

He prefaced the presentation by noting, “This is not a magic show,” then explained how Oracle became interested in how Google uses data to conduct ad targeting. Engineers used an out-of-the-box Android device, coupled with a network tap and other monitoring tools, to understand the process.

“Android has taken over global compute,” Lord said, noting the OS runs more than 70% of global computing. “These devices are data collection devices. As a network provider, you get some information about your calls you’re making and what not. But information about the user and the data from that device, that goes to Google.” Same with sensor data, application data and more. “These devices…they know who you are.”

Lord said the demo phone, configured to default settings, sent 4.2 megabytes of upstream data compared to 150 kilobytes of downstream data when not in use for a period of time. 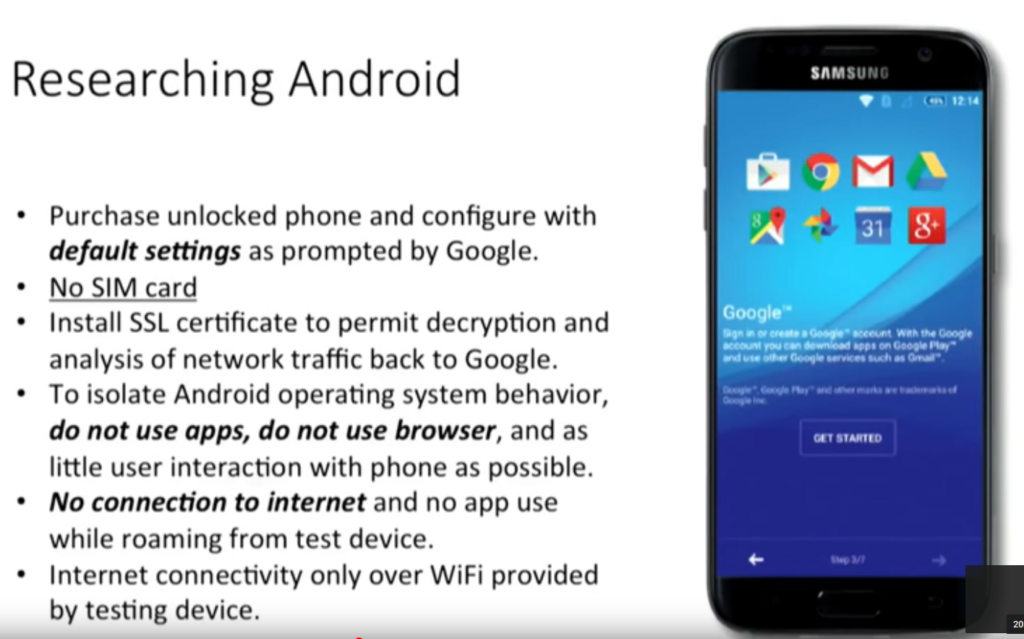 He said information leaving the phone is “probably for someone else’s benefit. If I’m roaming on your network, I’m paying Google. I’m subsidizing Google with my cell subscriber plan. That information…is not something that I thought I was sharing with anyone. Moreover, I didn’t think I was actually having to pay for it.”

Running through where the data was going, Lord pointed out a number of Google destinations as well as Facebook, which wasn’t even running on the phone. “We haven’t signed into Facebook. Why is this phone talking to Facebook? They’re actually trying to figure out the network quality and screen size of this device. They’re trying to give themself a fast lane on this device. That’s without me launching the app. It’s really curious for us as to why that’s actually happening.”

For a look at Lord’s full presentation, check out this video from CCA: