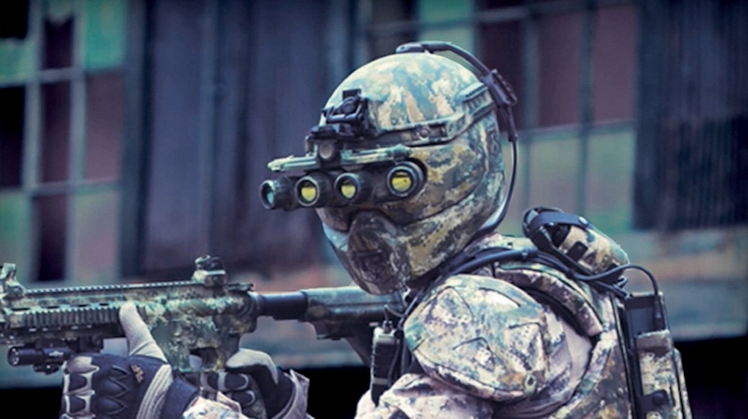 A mockup of U.S. SOCOM’s TALOS suit — a bold project,
but one that ultimately brought less tech than initially hoped. (DoD)

Ear, eye, brain and muscular enhancement is “technically feasible by 2050 or earlier,” according to a study released this month by the U.S. Army’s Combat Capabilities Development Command.

The demand for cyborg-style capabilities will be driven in part by the civilian healthcare market, which will acclimate people to an industry fraught with ethical, legal and social challenges, according to Defense Department researchers.

Implementing the technology across the military, however, will likely run up against the dystopian narratives found in science fiction, among other issues, the researchers added.

The report — entitled “Cyborg Soldier 2050: Human/Machine Fusion and the Implications for the Future of the DOD” — is the result of a year-long assessment.

It was written by a study group from the DoD Biotechnologies for Health and Human Performance Council, which is tasked to look at the ripple effects of military biotechnology.

The team identified four capabilities as technically feasible by 2050:

The study group suggested that direct neural enhancements in particular could revolutionize combat.

“This technology is predicted to facilitate read/write capability between humans and machines and between humans through brain-to-brain interactions,” an executive summary reads. “These interactions would allow warfighters direct communication with unmanned and autonomous systems, as well as with other humans, to optimize command and control systems and operations.”

Cyborg technologies are likely to be used among civil society as well over the next 30 years, the researchers noted.

Development of these capabilities will probably “be driven by civilian demand” and “a robust bio-economy that is at its earliest stages of development in today’s global market,” the group wrote.

But it’s after the year 2050 that the implications of cyborg capabilities become concerning.

“Introduction of augmented human beings into the general population, DoD active-duty personnel, and near-peer competitors will accelerate in the years following 2050 and will lead to imbalances, inequalities, and inequities in established legal, security, and ethical frameworks,” the summary reads.

The study group proposed seven recommendations, listed in no particular order, for Pentagon leaders to consider:

“The benefits afforded by human/machine fusions will be significant and will have positive quality-of-life impacts on humankind through the restoration of any functionality lost due to illness or injury,” the study group wrote.

But as these technologies evolve, “it is vital that the scientific and engineering communities move cautiously to maximize their potential and focus on the safety of our society,” the study group added.