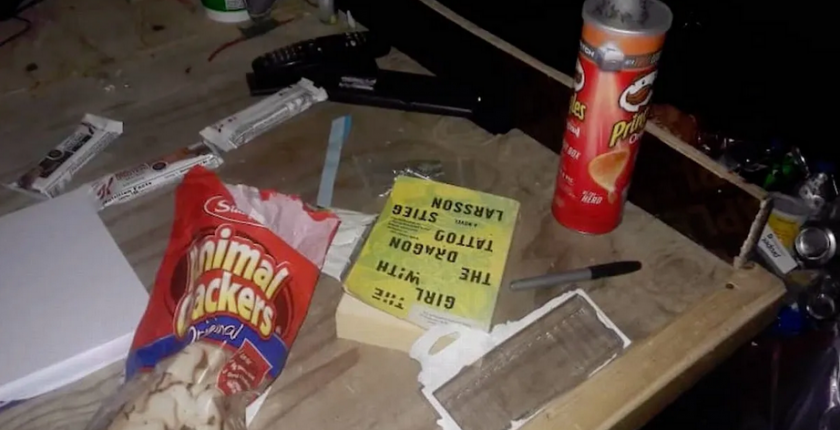 Video footage from Russian news agency Anna News shows the inside of an abandoned US army base in Syria, where items such as half-eaten food, beds, and footballs appear to have been left behind.

According to the text below the video Fadel Nasrala, a correspondent at Anna News visited the abandoned US base in Manbij, Syria after the US military left and the Syrian Arab Army took control of the area.

The footage was posted on YouTube on Oct. 15, 2019, and features Nasrala touring the base and pointing out items which appear to have been left behind by the US army in their haste to leave the area.

The full video is available to watch below:

In what appears to be an office, the lights on the plug sockets on the wall are on, indicating the electricity was left on.

Electrical items are left on the work station and remain plugged into the wall.

An opened bag of animal crackers and a tube of Pringles were left on the table, along with a Sharpie, some energy bars, and a copy of Stieg Larsson’s book “The Girl With The Dragon Tattoo.”

Elsewhere in the camp, a bottle of grape juice cocktail is left without the lid on, next to a GameBoy.

In the cafeteria, trays of half-eaten food can be seen on the tables along with unopened tubs of food and trash that has not been cleared away.

The correspondent also leads the camera to a fridge full of soft drinks including Coca-cola and Pepsi. Judging by the sound of the fridge it is still switched on. In the corner of a different room Nasrala points out a football in a basket.

Scenes outside of the abandoned base show deserted vehicles.

A video from the Russian international television network RT on Twitter showed more footage of an abandoned US military base.

It is unclear whether this is the same US base that Anna News had access to above, but according to RT the base is located 7 km south west of Manbij.

The base was built three years ago after the area was cleared of ISIS militants, according to RT.

Left in a hurry: RT films inside abandoned US military base at Manbij, Syriahttps://t.co/iXcyOzv87Z pic.twitter.com/gHCN9ARXsT

Trump’s decision to withdraw US troops from Syria led to a subsequent incursion from Turkish troops Oct. 9, 2019, displacing thousands of Kurdish people.

The Kurdish-led SDF allied with Russian mercenaries and the Damascus-backed Syrian Army in a deal announced on Oct. 13, 2019.