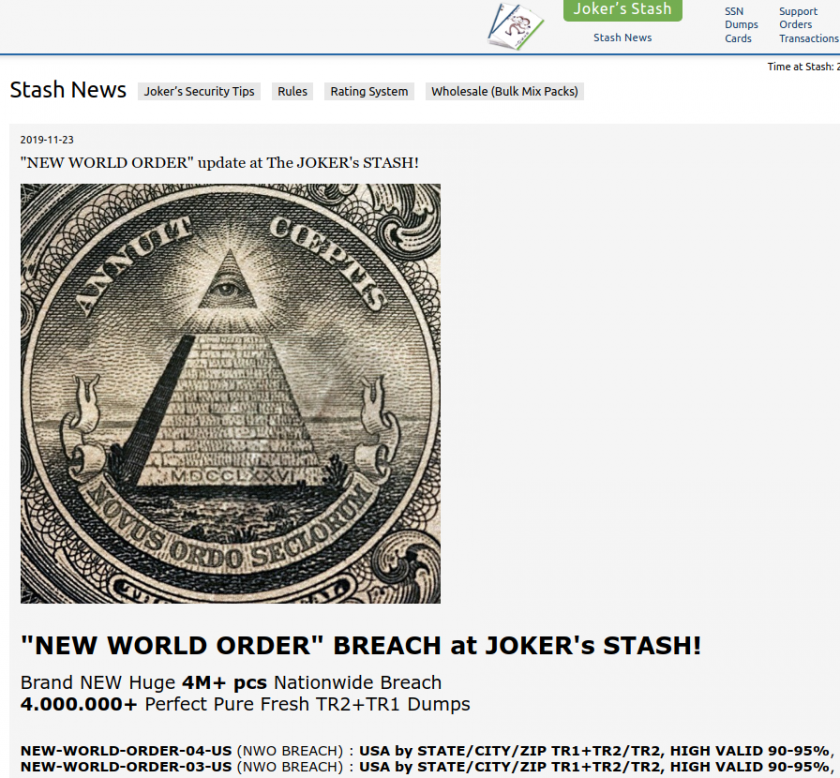 An advertisement on the cybercrime store Joker’s Stash for a new batch of ~4 million credit/debit cards stolen from four different restaurant chains across the midwest and eastern United States.

On Nov. 23, one of the cybercrime underground’s largest bazaars for buying and selling stolen payment card data announced the immediate availability of some four million freshly-hacked debit and credit cards. KrebsOnSecurity has learned this latest batch of cards was siphoned from four different compromised restaurant chains that are most prevalent across the midwest and eastern United States.

Two financial industry sources who track payment card fraud and asked to remain anonymous for this story said the four million cards were taken in breaches recently disclosed by restaurant chains Krystal, Moe’s, McAlister’s Deli and Schlotzsky’s. Krystal announced a card breach last month. The other three restaurants are all part of the same parent company and disclosed breaches in August 2019.

“Gemini found that the four breached restaurants, ranked from most to least affected, were Krystal, Moe’s, McAlister’s and Schlotzsky’s,”  Gemini wrote in an analysis of the New World Order batch shared with this author. “Of the 1,750+ locations belonging to these restaurants, nearly 50% were breached and had customer payment card data exposed. These breached locations were concentrated in the central and eastern United States, with the highest exposure in Florida, Georgia, South Carolina, North Carolina, and Alabama.”

The stolen cards went up for sale at the infamous Joker’s Stash carding bazaar. The most recent big breach marketed on Joker’s Stash was dubbed “Solar Energy,” and included more than five million cards stolen from restaurants, fuel pumps and drive-through coffee shops operated by Hy-Vee, a supermarket chain based in Iowa.

According to Gemini, Joker’s Stash likely delayed the debut of the New World Order cards to keep from flooding the market with too much stolen card data all at once, which can have the effect of lowering prices for stolen cards across the board.

“Joker’s Stash first announced their breach on November 11, 2019 and published the data on November 22,” Gemini found. “This delay between breaches occurring as early as July and data being offered in the dark web in November appears to be an effort to avoid oversaturating the dark web market with an excess of stolen payment records.”

Most card breaches at restaurants and other brick-and-mortar stores occur when cybercriminals manage to remotely install malicious software on the retailer’s card-processing systems, often by compromising third-party firms that help manage these systems. This type of point-of-sale malware is capable of copying data stored on a credit or debit card’s magnetic stripe when those cards are swiped at compromised payment terminals, and that data can then be used to create counterfeit copies of the cards.

The United States is embarrassingly the last of the G20 nations to make the shift to more secure chip-based cards, which are far more expensive and difficult for criminals to counterfeit. Unfortunately, many merchants have not yet shifted to using chip-based card readers and still swipe their customers’ cards.

According to stats released in September by Visa, 80 percent of U.S. storefronts now accept chip cards. Visa says for merchants who have completed the chip upgrade, counterfeit fraud dollars dropped 87 percent in March 2019 compared to September 2015. This may help explain why card thieves increasingly are shifting their attention to compromising e-commerce merchants, a trend seen in virtually every country that has already made the transition to chip-based cards.

Companies that accept, store, process and transmit credit and debit card payments are required to implement so-called Payment Card Industry (PCI) security standards, but not all entities are required to prove that they have met them. While the PCI standards are widely considered a baseline for merchants that accept payment cards, many security experts advise companies to put in place protections that go well beyond these standards.

Even so, the 2019 Payment Security Report from Verizon indicates the number of companies that maintain full compliance with PCI standards decreased for the second year in a row to just 36.7 percent worldwide.

As noted in previous stories here, the organized cyberthieves involved in stealing card data from main street merchants have gradually moved down the food chain from big box retailers like Target and Home Depot to smaller but far more plentiful and probably less secure merchants (either by choice or because the larger stores became a harder target).

It’s really not worth worrying about where your card number may have been breached, since it’s almost always impossible to say for sure and because it’s common for the same card to be breached at multiple establishments during the same time period.

Just remember that while consumers are not liable for fraudulent charges, it may still fall to you the consumer to spot and report any suspicious charges. So keep a close eye on your statements, and consider signing up for text message notifications of new charges if your card issuer offers this service. Most of these services also can be set to alert you if you’re about to miss an upcoming payment, so they can also be handy for avoiding late fees and other costly charges.

Another excellent piece of work by Brian Krebs:
https://krebsonsecurity.com/2019/11/sale-of-4-million-stolen-cards-tied-to-breaches-at-4-restaurant-chains/