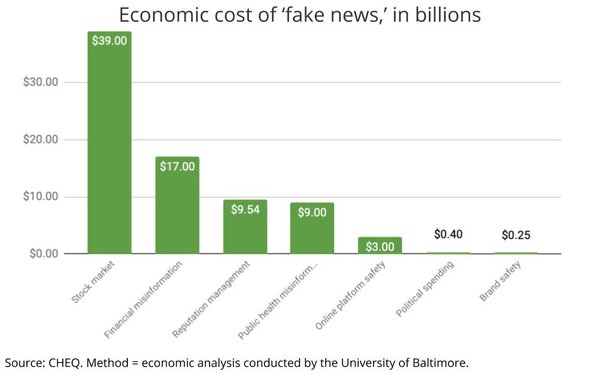 Cybersecurity company CHEQ conducted research with the University of Baltimore, which found that the epidemic of online fake news now costs the global economy $78 billion annually.

The report, which analyzes the direct economic cost from fake news, also estimates fake news has contributed a loss in stock market value of about $39 billion a year.

The World Economic Forum’s analysis released in 2018, ranks the spread of misinformation and fake news among the world’s top global risks.

Tytunovich defines fake news as the deliberate creation and sharing of false or manipulated online information intended to deceive and mislead audiences.

The research analyzes a variety of industries that take into consideration online impressions. CHEQ worked with the economics department at the University of Baltimore to analyze economic data across many sectors to estimate the annual financial cost of fake news on the world economy.

An example in the study points to content on the Yale School of Management site describing deceptive articles on investment websites that appeared to temporarily boost stock prices, noting a particular effect for small firms.

The political race in the United States also will be impacted. The study estimates at least $400 million annually will be spent on fake news in political races.

Based on current and estimated volumes of fake news, the study reveals that $200 million will be spent on boosting, advertising and deploying fake news in the upcoming 2020 presidential election.

CHEQ also on Wednesday announced closing $16 million in Series B funding from Battery Ventures and MizMaa Ventures. The latest capital brings the total investment to $22 million.

The company plans to use the latest funds to further its work in artificial intelligence and natural language processing to combat advertising fraud.