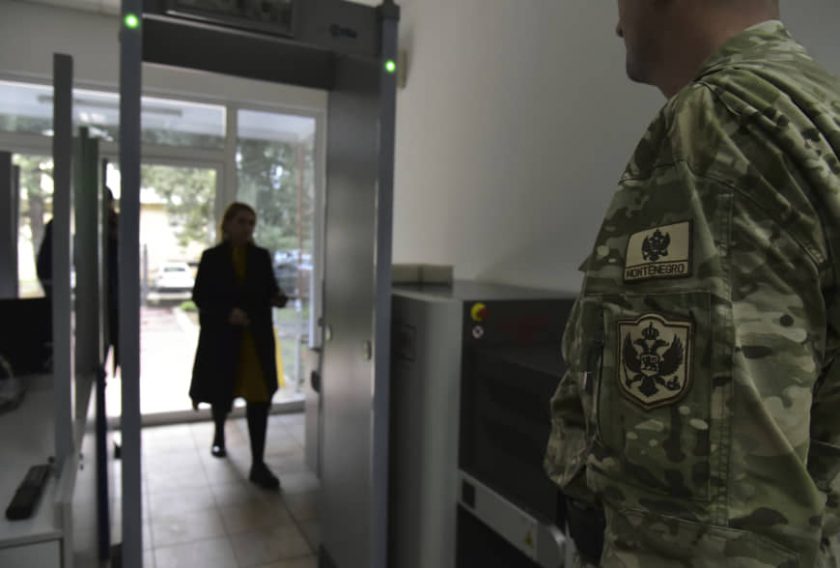 A guard stands at the entrance of the Montenegrin Defense Ministry in Montenegro’s capital Podgorica Nov. 11. Deployed inside the sprawling communist-era army command headquarters in Montenegro’s capital, a group of elite U.S. military cyberexperts are plotting strategy in a fight against potential Russian and other cyberattacks ahead of the 2020 American and Montenegrin elections. | AP

Deployed inside the sprawling communist-era army command headquarters in Montenegro’s capital, an elite team of U.S. military cyber experts are plotting strategy in a fight against potential Russian and other cyberattacks ahead of the 2020 American and Montenegrin elections.

With its pristine rocky mountains, lush green forests and deep blue seas, the tiny Balkan state seems an unlikely location for waging global cyber warfare. But after the newest NATO nation was targeted by Russia-linked hackers and following a Moscow-backed coup attempt in Montenegro in 2016, the U.S. military dispatched their cyber experts to the Adriatic Sea nation.

Montenegro is in the Balkans, a strategic area where Russia has been seeking to restore its historic influence. The country of just over 600,000 people joined NATO in 2017, defying strong opposition from Moscow. It has proven to be a key Western ally in the volatile region that went through a devastating war in the 1990s’.

Montenegrin Defense Minister Predrag Boskovic — careful not to mention Russia — said preventing cyberattacks and disinformation campaigns is key to protecting the Balkans from returning to the chaos of the war years in the 1990s, when tens of thousands of people died during the breakup of the former Yugoslavia.

“We have seen that the (2016) U.S. election had also faced certain hybrid and cyberattacks,” Boskovic said in an interview. U.S. authorities accuse Russia of using hacking and social media campaigns to boost Donald Trump’s presidential candidacy and sow discord among American voters.

“Americans can learn something from us about potential threats for their systems and networks because Montenegro was a real example of an all-out attack before the (2016) election and its NATO accession,” Boskovic said.

One of the malicious software attacks targeted the Montenegrin Defense Ministry with a routine-looking email. It appeared to be from a NATO-member country, but in fact came from hackers.

“Once an employee clicked on the attachment in the email, all of the computers in the network were compromised and they (the hackers) could read all the data that was communicated within the network,” Boskovic said.

Russia’s tactics in undermining the Balkan’s Euro-Atlantic integration includes anti-Western propaganda designed to tarnish the image of European democracies. This, the Kremlin apparently hopes, will slow down the region’s integration into the 28-nation European Union.

Russia’s allies in the Balkans — Serbia and the Bosnian Serbs — have both ruled out joining NATO and boycotted the Western sanctions against Moscow over its policies in Ukraine. Pro-Russian propaganda in those areas depicts the West as the enemy of the Serbs.

Russian activity in the region risks exacerbating ethnic tensions and instability, but the U.S. response has been inconsistent. Trump, a frequent NATO critic, once questioned whether U.S. troops should defend Montenegro as part of the Western military alliance.

But, in a statement, the U.S. cyber command, or USCYBERCOM, has highlighted the partnership with Montenegro.

“The team’s operations are part of efforts to persistently engage adversaries in cyberspace, working to protect critical infrastructure alongside valued partners and allies,” the statement said. “These defense operations also generate insights into adversarial cyber threats to the upcoming U.S. and Montenegrin elections in 2020.”

U.S. Secretary of State Mike Pompeo said during a recent visit to Montenegro that as the result of the cooperation, the two countries have developed ways to counter the latest Russian malware.

This is the second time that cyber command has worked with Montenegro. It has also worked with North Macedonia, which will soon join NATO.

Russia has been accused of meddling in election campaigns worldwide, most recently in Britain. Moscow has repeatedly denied doing so.

In May, a court in Montenegro found 14 people, including two Russian military intelligence operatives, guilty of plotting a coup on election day in 2016 to prevent Montenegro from joining NATO. The two Russians, who allegedly coordinated the botched effort from neighboring Serbia, were tried in absentia and are believed to be in Russia. Moscow has denied involvement.

Montenegro and its allies have expressed fears that Moscow could try to meddle again in next year’s elections.

But one of the convicted coup plotters and a leader of the pro-Russian opposition Democratic Front coalition insisted the incident was staged to help the long-ruling Montenegrin leader, Milo Djukanovic, stay in power.

Milan Knezevic, who remains free pending appeals on his 5-year prison sentence, said he now sees the talk about looming hybrid attacks from Russia “as a preparation of the (Montenegrin) regime for the 2020 elections.”

“They need a new mantra and a new narrative in order to allegedly protect the Montenegrin state from the ‘malign’ Russian influence,” he said at his party office, which was decorated with his photos with Russian President Vladimir Putin.

“I wouldn’t rule out some kind of hybrid attacks on the election day,” he added sarcastically.