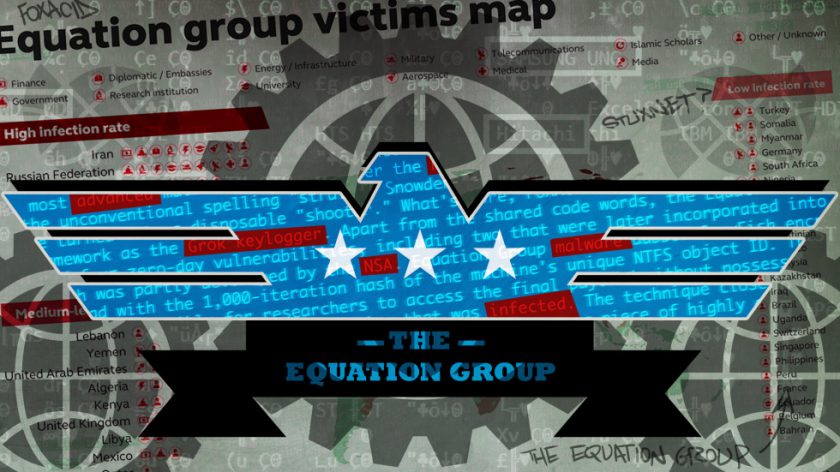 A Chinese threat actor was spotted using a tool attributed to the NSA-linked Equation Group more than one year prior to it being leaked by the mysterious Shadow Brokers, Symantec revealed on Monday.

The Chinese cyber espionage group is tracked as Buckeye, APT3, UPS Team, Gothic Panda, and TG-0110, and it has been linked by researchers to the Chinese Ministry of State Security. The threat actor had been active since at least 2009 before it apparently ceased operations in mid-2017.

In late November 2017, the US government announced charges against three Chinese nationals for attacks launched by the hacker group against Siemens, Trimble, and Moody’s Analytics.

Buckeye’s attacks involved several pieces of malware, including a backdoor implant known as DoublePulsar and an exploit tool, dubbed Bemstour, that had been used to deliver the backdoor.

DoublePulsar became widely known in April 2017, when it was leaked by the Shadow Brokers group. 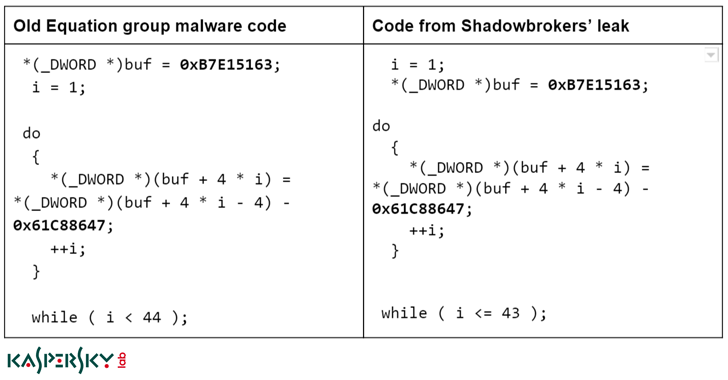 The Shadow Brokers announced in August 2016 that it had hacked the Equation Group, a threat actor widely believed to be sponsored by the U.S. National Security Agency (NSA). Over the coming months, the Shadow Brokers leaked many tools obtained from Equation Group and apparently attempted to make a profit by selling and auctioning the stolen data.

However, Symantec now says it has found evidence that Buckeye used a variant of DoublePulsar as early as March 2016 in an attack aimed at Hong Kong — that is more than one year before DoublePulsar was leaked by Shadow Brokers.

Buckeye’s DoublePulsar appeared to be newer than the one leaked by Shadow Brokers as it was designed to target newer versions of Windows, including Windows 8.1 and Server 2012 R2.

“Based on the timing of the attacks and the features of the tools and how they are constructed, one possibility is that Buckeye may have engineered its own version of the tools from artefacts found in captured network traffic, possibly from observing an Equation Group attack. Other less supported scenarios, given the technical evidence available, include Buckeye obtaining the tools by gaining access to an unsecured or poorly secured Equation Group server, or that a rogue Equation group member or associate leaked the tools to Buckeye,” Symantec said in a blog post.

Interestingly, despite Buckeye apparently no longer being active since mid-2017, its DoublePulsar variant was still spotted in September 2018. Furthermore, threat actors apparently continued to improve Bemstour, with the latest sample found by Symantec dated March 23, 2019.

“It may suggest that Buckeye retooled following its exposure in 2017, abandoning all tools publicly associated with the group. However, aside from the continued use of the tools, Symantec has found no other evidence suggesting Buckeye has retooled. Another possibility is that Buckeye passed on some of its tools to an associated group,” Symantec explained.

Buckeye had been known to use zero-day vulnerabilities in its attacks. According to Symantec, Bemstour uses two Windows vulnerabilities for remote kernel code execution: CVE-2017-0143, a Windows SMB code execution flaw patched by Microsoft in March 2017, and CVE-2019-0703, a Windows SMB information disclosure bug that Microsoft addressed with its March 2019 Patch Tuesday updates. Buckeye had exploited both of these flaws before fixes were released.

Symantec reported CVE-2019-0703 to Microsoft in September 2018. It’s worth noting, however, that Microsoft’s advisory for CVE-2019-0703 indicates that the company has no evidence of exploitation.

UPDATE. Microsoft has confirmed to SecurityWeek that CVE-2019-0703 has been exploited in attacks. The company blamed a clerical error and it has updated its advisory. 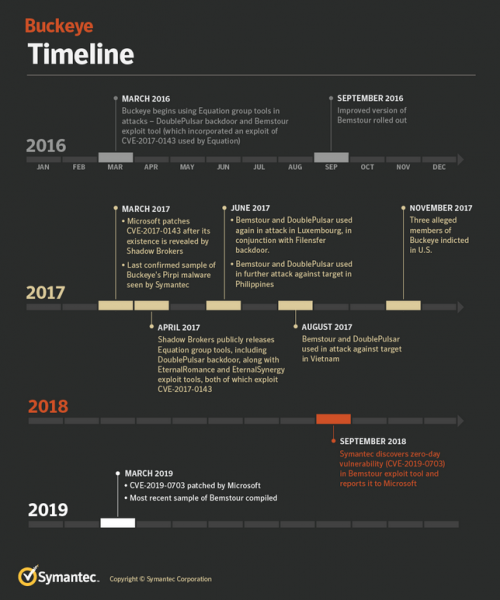