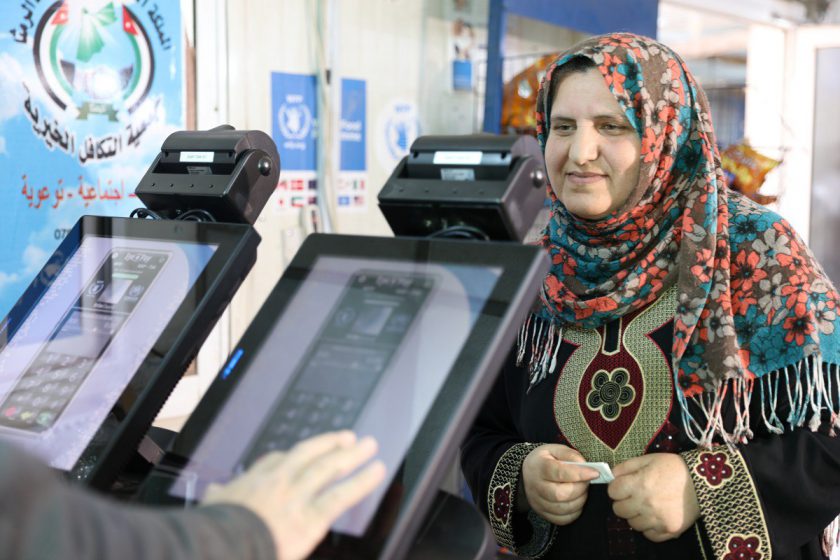 AMMAN – The World Food Programme (WFP) in partnership with the United Nations High Commissioner for Refugees (UNHCR) has introduced an innovative iris scan payment system in Jordan’s Zaatari refugee camp, allowing 76,000 Syrian refugees to purchase food from camp supermarkets using a scan of their eye instead of cash, vouchers or e-cards.

The cutting-edge technology was launched in Jordan’s King Abdullah Park refugee camp in February this year, when for the first time in the history of humanitarian assistance, a WFP beneficiary received food assistance in the blink of an eye. The system was expanded to Azraq refugee camp in eastern Jordan in April.

“The iris scan payment system has been extremely successful, and we are thrilled that WFP and its partners are now able to serve Syrian refugees living in Jordan’s largest camp through this innovative system,” said WFP Country Director in Jordan Mageed Yahia. “Iris scan technology has reshaped the shopping experience for Syrian refugees in Jordan, making it easier and more secure for them, while also enhancing accountability.”

For Zaatari resident Hana Heraaki, the true value of this system lies in its convenience. “Now I don’t have to worry if I forgot my card at home or if I misplaced it. Whenever I’m near the shop, I can just walk in and get whatever food that’s missing from home,” she said.

Once a shopper has their iris scanned, the system automatically communicates with UNHCR’s registration database to confirm the identity of the refugee, checks the account balance with Jordan Ahli Bank and Middle East Payment Services and then confirms the purchase and prints out a receipt – all within seconds.

The introduction of the iris scan payment system in Jordan’s Syrian refugee camps represents WFP’s commitment to employing innovative tools and approaches in the fight against hunger. WFP seeks to expand the use of the technology to refugees living in communities outside of camps.

Through the iris scan and electronic voucher programme, WFP supports more than half a million Syrian refugees in Jordan. WFP is also providing assistance to almost 140,000 vulnerable Jordanians through food rations and cash for work and cash for training programmes.

WFP is the world’s largest humanitarian agency fighting hunger worldwide, delivering food assistance in emergencies and working with communities to improve nutrition and build resilience. Each year, WFP assists some 80 million people in around 80 countries.
Follow us on Twitter @wfp_media and @wfp_mena

The United Nations (UN) has partnered with the World Identity Network (WIN) to create a Blockchain-based digital identity system to help fight child trafficking around the world.

The partners have already launched a pilot test of the system as of mid-November 2017.

The partners announced the launching of the pilot program at the Humanitarian Blockchain Summit held in New York. The pilot involves the participation of UN agencies, UN Office for Project Services (UNOPS) and the UN Office of Information and Communications Technology (UN-OICT).

In their press release, the partners claimed that the use of the system increases the chance of apprehending the child traffickers.

How does child trafficking happen

In her statement, WIN Co-Founder and Chief Executive Officer (CEO), Dr. Mariana Dahan, said that “invisible” children under the age of five and who have no birth certificates are potential trafficking victims as they are often missed by social programs being offered by governments or development agencies.

“Several developing countries are actively looking at more efficient ways to prevent child trafficking. Identification is always at the heart of the solution.”

Meanwhile, UN Women Deputy Executive Director, Yannick Glemarec, said that child trafficking is among the greatest human rights abuses. The use of Blockchain technology can be effective in resolving the problem and save millions of children around the world.

“Child trafficking is one of the greatest human rights abuses. Blockchain would be a ‘potentially powerful’ technology to address the problem and potentially save ‘millions of children.’”

In the past, the United Nations has also used Blockchain to send aid in Syria, launched a car fleet man

agement project, and is currently testing other ways to use Blockchain on its other projects.

Traditionally, cash transfers have been made available to refugees via third-party financial service providers such as banks. Through the partnership, Syrian refugee women who participate in the UN Women cash for work programme will be able to access their funds directly and the accounts will be kept securely on a blockchain network. Previously women received a monthly entitlement in the form of cash on a set date. Through blockchain, UN Women and WFP are exploring the possibility of providing female refugees with cash back at WFP-contracted supermarkets or pay for their purchases directly.

The partnership stems from WFP’s Building Blocks project, which already provides cash transfers to 106,000 Syrian refugees in Jordan through a blockchain based system.

Highlighting why technologies like blockchain have a key role to play in accelerating women’s economic empowerment, UN Women Executive Director Phumzile Mlambo-Ngcuka said: “We know that women in crisis situations and displacement settings tend to have lower digital literacy than men, and often lack access to the technology and connectivity that are so critical in today’s world. UN Women is partnering with WFP to change this by using innovative technology to drive change for women in the most challenging settings and to accelerate progress towards women’s economic empowerment on a large scale.”

How it will work: A Syrian woman will scan her eye to request cash back at WFP-contracted supermarkets. This will link to her account on the blockchain, and the amount of the cash distribution is automatically sent to Building Blocks. The fact that UN Women and WFP validate each other’s transaction through a common blockchain network, results in improved security and accountability. There are also opportunities for cost and risk reduction, as well as increased harmonization of aid efforts.

“At WFP, we will explore every possible way to deliver the help people need, in the most efficient and effective means available. Our work with UN Women to help female Syrian refugees is yet another sign of that innovative spirit, in this case using technology to make an even bigger impact on the lives of those we serve,” said David Beasley, Executive Director of WFP.

UN Women also aspires to increase the financial literacy of their recipients through expense tracking and budgeting seminars conducted at their ‘Oases’, where recipients would also be able to view their Building Blocks accounts and its history online. In Za’atari and Azraq camps, UN Women’s four Oases centres are increasing training opportunities to women and girls focused on digital literacy. They provide a holistic approach to resilience and empowerment for women and girls through livelihoods opportunities; protection and prevention of gender-based violence; remedial education and civic engagement opportunities; and access to childcare. Since 2012, UN Women has supported women in refugee camps by providing them with skills, access to public space and economic independence, including the largest female-focused cash-for-work programme.

Women are disproportionately affected by humanitarian crises; many of them are forced by conflict to become the primary breadwinners, while bearing the responsibility of taking care of their children and families.