Space is a hostile environment. Most of the hostility is inherent — a void cannot itself be accommodating to humans, and the projects that do sustain human life in orbit do so by creating tiny livable pockets, encased in proverbial tin cans. That space could be a vector for other threats became clear from the dawn of the space race.

A missile that can carry a satellite into orbit could carry a much deadlier payload to somewhere else on Earth. And so space became both a place to put early warning systems and the path by which weapons would pass through on their way to doomsday. In order to prepare for new threats from or through the great beyond, the Pentagon spent $22 million between 2007 and 2012 researching a number of speculative threats under an “Advanced Aerospace Threat Identification Program.”

How speculative? One of the studies was called “Warp Drive, Dark Energy, and the Manipulation of Extra Dimensions.”

On Jan. 16, 2019, the Defense Intelligence Agency released a list of 38 research titles funded by the “Advanced Aerospace Threat Identification Program,” which includes the above title on warp drives, one on invisibility cloaking, and another about stargates. All three are technologies that have found a home in fiction, powering the spaceships of the Star Trek universe, the in-fiction specific weapons of the Romulans and Klingons, as well as the entire “Stargate” franchise. The research papers were just one part of the Advanced Aerospace Threat Identification Program, which also looked at unidentified flying objects, included recovered alloys of unknown origin.

The program, funded secretly largely at the discretion of then-Senate Majority Leader Harry Reid, with backing from Ted Stevens of Alaska and Daniel Inouye of Hawaii, could easily be written off as a fanciful jaunt to see how reality matches up with fiction. Yet of note in the DIA’s list of 38 studies are many others with some more immediate applications.

“Advanced Nuclear Propulsion for Manned Deep Space Missions” and “Positron Aerospace Propulsion” have both been studied in some form by NASA, and “Laser Lightcraft Nanosatellites” is a technology explored by the Air Force Research Laboratory. Whether or not DIA’s efforts summarized or expanded upon existing research in these topics is likely the subject of future Freedom of Information Act requests, and indicates that not everything studied under the program was speculative fiction.

“Detection and High Resolution Tracking of Vehicles at Hypersonic Velocities,” a paper authored by Dr. W. Culbreth of University of Nevada Las Vegas, is one that could perhaps apply to tracking vessels of unknown origins, but the contents could also inform the modern arms race around hypersonic weapons.

Matching the modern threat environment, a study on the “Cognitive Limits on Simultaneous Control of Multiple Unmanned Spacecraft” may have foreshadowed thinking about controlling autonomous swarms of robots, adding in the unique challenges of operating outside the atmosphere.

The last study in the list appears twice: “State of the Art and Evolution of High Energy Laser Weapons” has both a classified secret/NOFORN (no foreign nationals) version and an unclassified, for official use only version. Research in energy weapons has continued at a steady clip since the end of funding for the Advanced Aerospace Threat Identification Program; whatever knowledge these papers hold may be more akin to a time capsule than a peek in the future.

The implications of the entire trove will have to wait for a full exploration of the revealed contents. What we can say is that, two decades before there was even an idea of a Space Force, the Pentagon spent a nonzero sum of money looking into the speculative edges of the use of force in space.

The Defense Intelligence Agency disclosed this week that it had funded research on warp drive, invisibility cloaking, and other areas of fringe or speculative science and engineering as part of a now-defunct program to track and identify threats from space.

From 2007 to 2012, the DIA spent $22 million on the activity, formally known as the Advanced Aerospace Threat Identification Program. It was apparently initiated at the behest of then-Senate Majority Leader Harry Reid, with most of the funding directed to a Nevada constituent of his. See “Glowing Auras and ‘Black Money’: The Pentagon’s Mysterious U.F.O. Program” by Helene Cooper, Ralph Blumenthal and Leslie Kean, New York Times, December 16, 2017.

Yesterday, the DIA released a list of 38 research titles funded by the program, many of which are highly conjectural and well beyond the boundaries of current science, engineering — or military intelligence. One such title, “Traversable Wormholes, Stargates, and Negative Energy,” was prepared by Dr. Eric Davis, who has also written on “psychic teleportation.”

(Dr. Davis responded vigorously to skepticism of his work in a 2006 comment to this Secrecy News post.)

The DIA list of research papers, marked for Official Use Only, was previously provided to Congress in January 2018. It was publicly released yesterday under the Freedom of Information Act.

Although many FOIA offices are closed due to the continuing shutdown of the federal government, the DIA FOIA office and at least some others in the Department of Defense are still operational.

A DIA FOIA officer noted with some exasperation that yesterday’s release of the list of research papers will, in all likelihood, prompt new FOIA requests to his Agency for each of the listed papers. 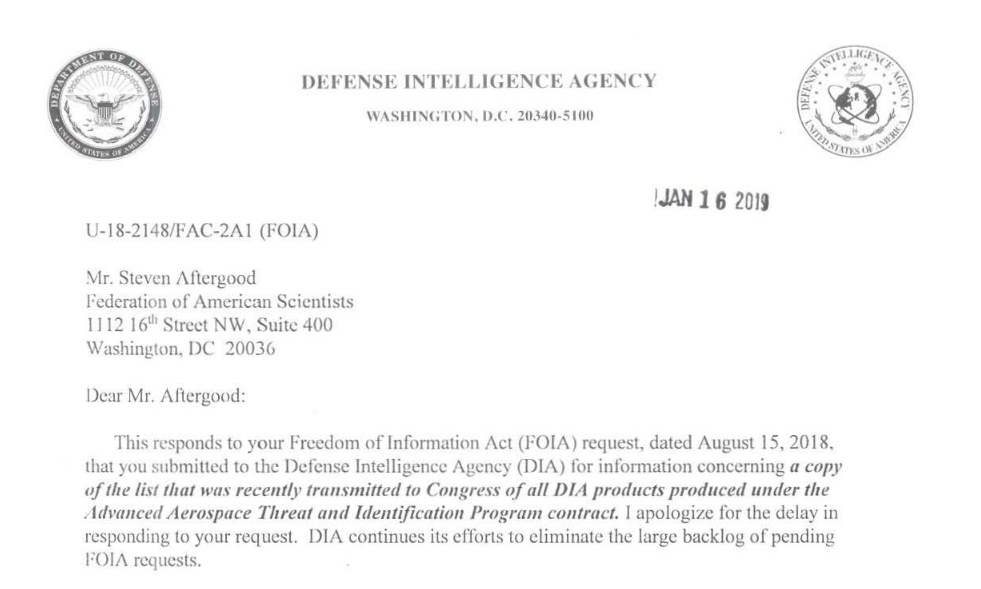