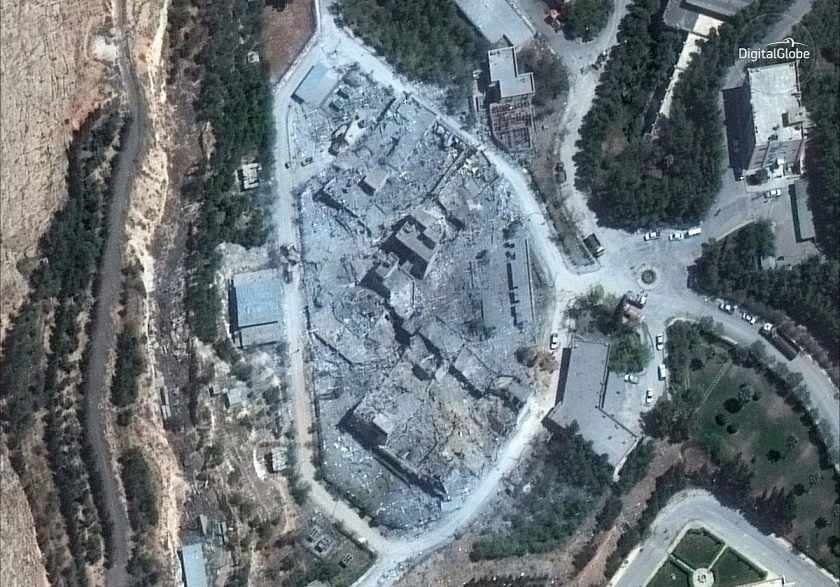 Intelligence analysts and soldiers on the battlefield could have access to near real-time imagery from commercial satellites as soon as 2021 thanks to new industry partnerships.

Amazon Web Services unveiled Nov. 28 a new product named AWS Ground Station, which includes parabolic antennas at 12 locations across the globe. Those ground stations can download imagery data as satellites pass overhead and then push that information to the cloud at faster speeds than traditional ground stations.

Meanwhile, leaders from satellite imagery company DigitalGlobe said in tests they were able to move imagery data from the ground station to the cloud in less than a minute. Using today’s technology, that task takes about an hour.

Combined, the speed of the new ground stations and the expected launch of DigitalGlobe’s constellation of next-generation imagery satellites in 2021 would offer a new level of immediacy to customers.

“When firefighters are attacking a wildfire, they need the most up-to-date information to save lives and homes,” Jeff Carr, director of mission operations engineering support at DigitalGlobe, wrote in a Nov. 27 blog post. “When first responders are tracking down refugees fleeing danger in flimsy rubber boats, they need real-time information about where those rubber boats are located before they sink. The uses for current and accurate space-based data is growing — and the end-users need it quickly.”

DigitalGlobe provides imagery to the National Reconnaissance Office under the Enhanced View contract and to the National Geospatial-Intelligence Agency with the Global EGD contract. Several companies that already provide imagery and data to the Department of Defense and intelligence community — including BlackSky, Spire and HawkEye 360 — are also using the ground stations.

Traditionally, ground stations download information from satellites on a rigid schedule, meaning users must wait several hours until the next pass when new information is available and can be processed. The company’s new Legion satellites will double the number of times the satellites contact ground stations. In addition, an imagery satellite could revisit the same target as many as 15 times a day. All of that means defense and intelligence agencies could have access to imagery that is a few minutes old, not several hours old.

Turner Brinton, a DigitalGlobe spokesman, declined to comment on the technical aspects of how the company would support the U.S. government.

“Satellite data is incredibly useful for building a wide range of important applications, but it is super complex and expensive to build and operate the infrastructure needed to do so,” Charlie Bell, senior vice president of AWS, said in a press release. “Today, we are giving satellite customers the ability to dynamically scale their ground station antenna use based on actual need. And, they will be able to ingest data straight into AWS, where they can securely store, analyze and transmit products to their customers without needing to worry about building all of the infrastructure themselves.”

In addition, Lockheed Martin and Amazon Web Services announced a new partnership Nov. 27 that would allow customers to download satellite data faster, more often and from multiple satellites at the same time.

That technology is a shoebox-sized antenna and satellite receiver known as Verge. Each antenna would cost about $20,000 and replace larger parabolic antennas, which are often priced at more than $1 million. While Pentagon officials have worried that larger ground stations for military satellite could make easy targets, the relatively small size of Verge could be an attractive feature to defense officials focused on resiliency.

It’s unlikely the Defense Department would rely on the new technology for its satellite downlinks, but Lockheed Martin leaders said they could envision the military would use the ground stations for experimental satellites, particularly those in low-Earth orbit. Or the technology could be used to create a backup ground station for some of the Pentagon’s more sophisticated satellites.

Already, Lockheed Martin has tested a network of 10 S-band antennas in the Denver area that downlinked from a small satellite from the Air Force Research Laboratory, said Rick Ambrose, Lockheed Martin’s executive vice president for space. In addition, the company has also downlinked data from another, unspecified government satellite and sent that data to the agency’s cloud.

Many people believe it’s possible to get real-time video and photography — from anywhere on earth — from satellites. Maybe it’s from watching too many “Jason Bourne” movies, where mysterious government technology enables such a thing. Or it could just be from watching live TV over satellite that makes us think this is pretty routine.

The reality is a bit different. Sure, there may be government satellites we don’t know about that have the capability to deliver imagery instantaneously like this, but nothing like that is available commercially. And those satellite video streams from the Olympics or wherever are specific to one geographic location — not the kind of thing that enables you to see the whole Earth in real time or close to it.

But that’s about to change.

Here at Viasat’s Antenna Systems facility near Atlanta, we’ve been working on something called Real-Time Earth that’s a truly groundbreaking approach to remote sensing — which is the scanning of the planet by satellite (or aircraft) to acquire information. But before I describe this fascinating service, it’s important to know a little about the remote sensing scene today.

Did you know that, over the next five years, it’s anticipated that over 5,000 new small satellites are planned to be launched into low-earth orbit (LEO)? These “LEOs” are quite a bit different from the very large, powerful satellites Viasat operates at much higher orbits. Their proliferation is driven by technology advancements that enable dramatically better sensors (cameras, etc.) that are smaller and lighter, thus much lower cost to build and launch.  They herald an exciting new era of earth observation via remote sensing.

LEO satellites do all kinds of interesting things depending on what kind of sensor is mounted on it. Some of them take pictures (think Google Earth) while others measure waves and tides using SAR Doppler (Synthetic Aperture Radar). Some have cameras capturing video footage, and there are even satellites that provide X-ray imagery for looking through clouds. These can sense the concentration of water molecules in the air, helping predict weather patterns and measuring airborne pollution.

And have you heard of the Great Pacific Garbage Patch — the huge concentration of plastic accumulating between Hawaii and California? As scientists strive to find ways to address this and other ocean pollutants, a new application is using space-based sensing to track the flow and concentration of the plastic pollutants. The goal is to trace the origin of the garbage to devise ways to stop it at the source.

But no matter what information the satellites are capturing, they all have one thing in common: They need to get the data they’re collecting down to earth.

And that’s not as easy as it sounds. The way this works today, the operator of the LEO (or the fleet of LEOs) has an arrangement with the operator of an earth station – typically near one of the poles since many of these satellites use polar orbits. Throughout the day, when the satellite comes in range of the ground antenna, they download their data and uplink new tasking to the satellite. The data is then sent via terrestrial means to a processing center to generate images. This process takes anywhere from 12 to 24 hours before the photo (or whatever) is in the hands of the person who wanted it.

Now, for many applications, this isn’t a big deal. If you’re a city planner looking for satellite imagery of the local parks and highways, a few hours here and there won’t make a lot of difference for your uses. But let’s say you’re an insurance company looking for real-time imagery from a disaster area. Or law enforcement monitoring an unfolding dangerous situation or search & rescue operation. And, of course, for the military, there are countless applications ranging from border security to mission reconnaissance and lots more.

So how do we do this?

As the antenna division of a company that’s known for its satellites, we here at Viasat Atlanta like to remind people how critical those earth-based antennas are. And while much of our work is focused on providing the equipment for our own satellite services, we recognized the need some other satellite operators might have for a better, more timely connection. Since we operate earth stations and networks in many places, with many more on the way all around the world, we’re in a perfect position to make this happen with what we call Real-Time Earth.

In business parlance, what we determined we could offer was an added dimension of value – “Real-Time.” Will LEO operators find value in this speedier delivery of data? We believe so, and as we build out our global network over the next few years, I’m pretty certain that many of these small satellite operators will one day wonder how they ever lived without this capability.

In January, we announced the start of operations of one of our Real-Time Earth antenna systems at Surrey Satellite Technology Ltd (SSTL) in Guildford, England. This enables SSTL to offer that quick delivery of data to their customers as a proven service component of their satellite offering. We’re looking to add many more customers like this around the world, making it easier and more affordable for those who gather information from remote sensing to get the data to their processing centers.

But there’s more ahead.

Today, Viasat’s own satellites cover much of North America, plus Mexico, Central America, the Caribbean and air and maritime routes to Europe. When we begin launching our next generation of satellites — ViaSat-3 — starting around 2020, we’ll be on track to cover most of the globe a few years after that. Once this constellation is in place, the Real-time Earth network will become a lot more powerful.

But what if, instead of all those expensive and complicated earth station connections, you had all those satellites transmit their data to our ViaSat-3 satellites? With a global network, the information is then transmitted directly to you via internet. No extra earth stations required!

If you’re thinking Viasat is disrupting our own earth station business with this, you’re right. The way we look at this is the same way the creators of things like the iPhone or Uber did: If you’ve got a really great idea that adds a new and valuable dimension of value, the business will follow. When you change a major paradigm like this, it does take a little while for the market to catch up. And we can’t dictate that — the market decides.

We’re pretty sure the market will decide this kind of instantaneous information delivery from space is indispensable. It may take a little while, but it’s an exciting place for us to be: on the forefront with a service that allows for enormous scalability all around the world.