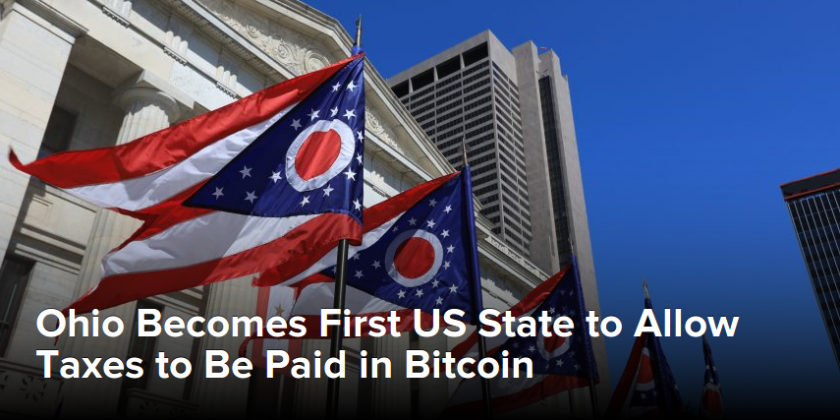 Ohio has become the first U.S. state to allow taxes to be paid in bitcoin.

According to a report from The Wall Street Journal on Sunday, starting this week, companies in the state will be able to pay a variety of taxes, from tobacco sales tax to employee withholding tax to public utilities tax with the cryptocurrency.

Compatible wallets include the Bitcoin Core client, Mycelium and breadwallet, and others that are compatible with the Bitcoin Payment Protocol.

All tax payments will be processed by Atlanta-based bitcoin payments processor BitPay, which will convert bitcoins to dollars for the Treasurer’s office.

While, for now, the facility is available only for businesses, it is reportedly expected to be made available to individuals in the future.

Lawmakers in other U.S. states have also considered allowing crypto tax payments in the past. Back in March, Illinois and  Arizona were both weighing proposals to allow residents to pay their tax bills in bitcoin. Georgia was also considering the option in February.

However, Arizona’s lawmakers scrapped the plan two months later due to insufficient votes for the proposal. Similarly, Georgia’s proposal also stalled in April, due to a “lack of understanding” about cryptocurrency, said Senator Mike Williams at the time.

In the same month, Ohio lawmakers also pitched their state as a future hub for blockchain, hoping to both attract companies in the space and blockchain talent to the jurisdiction.