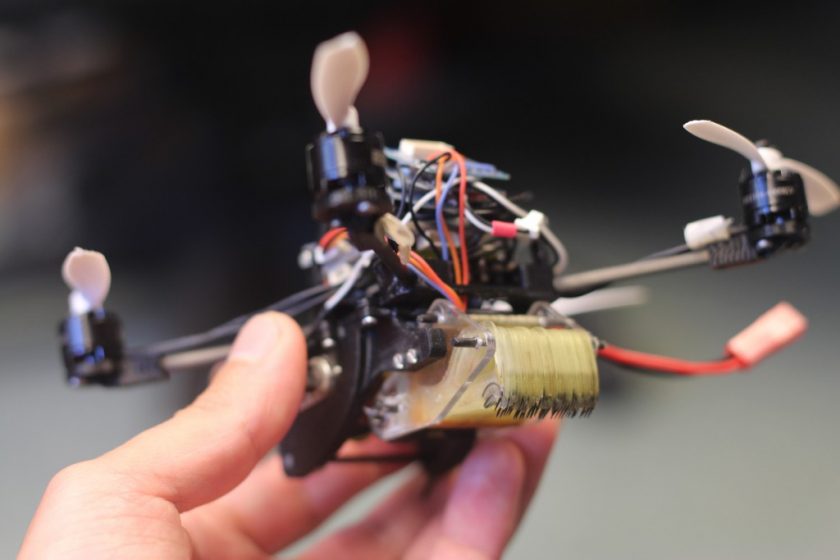 It’s an image maybe just as absurd as swallows carrying coconuts, but a reality infinitely more useful. A pair of small drones with winches and hooks work together to open a door, manipulating an object 40 times their own mass.

The technique is novel, inspired by wasps, and suggests new tasks for small military robots in the future.

The technology — designed by a team of researchers at Stanford University and the École Polytechnique Fédérale de Lausanne in Switzerland — looks to the way that small wasps pull large objects across the ground. Like wasps, the drones of the “FlyCroTug” system fly into place, and then land on the ground before pulling. Unlike wasps, the drones are able to clip cords and anchors on door handles, or slide a gripping strip in the gap under a door, release some slack, land on the ground and then start both walking and winching the object in the direction it wants to go.

The overall effect is that two small, specially built flying robots are able to work together to clasp onto and then pull open a door.

In a video demonstrating the ability, the door is forgiving: unlocked, with an easily gripped handle. If a group of soldiers or Marines were to carry along door-opening drones, it’s unlikely they could count on the same ease of access, but a similar set of drones could perhaps pull open a door that’s been blasted off its hinges, or with different attachments drag an obstacle out of the way. (Finely maneuvering a key into a lock seems unlikely for now, but stranger things have happened.)

What’s really exciting about the FlyCroTug drones, besides the sheer weirdness of a couple hand-sized quadcopters opening a door, is the way it encourages us to think about drones as not just scouts or weapons platforms, but as useful tools. Small bodies that can fly through narrow spaces and then drag larger objects out of the way mean new paths for scouts or even humans. It means that the small robots that squads take into battle in the future can do more than just look ahead. They can lend a hand, or more realistically, a winch and a hook and a surprising amount of gripping power.

Watch the video below: