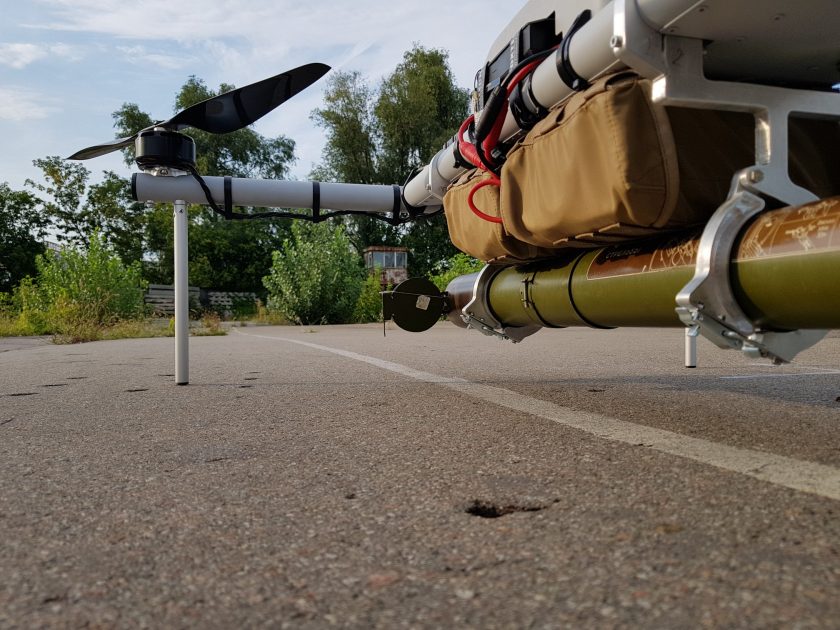 Military airplanes started as unarmed scouts in 1909. By 1911, pilot Lieutenant Giulio Gavotti, flying a plane for the Kingdom of Italy, decided to bring some grenades with him for a mission above Libya, and then drop them near a Turkish camp target below. While Gavotti’s flight didn’t cause any casualties, it set the stage for subsequent rapid adaptations of a new form of flying scout into a new kind of flying attack. Consider, then, the “Demon” aircraft, from Ukrainian dronemaker Matrix UAV. Taking an existing quadcopter model, the Demon modification attaches an RPG to the fuselage, which makes it roughly the 21st century equivalent of a satchel full of explosives stuffed into the cockpit.

Yuriy Kasyanov of Matrix UAV introduced the Demon drone in a public facebook post on August 17th. Kasyanov described it as a “shock multipurpose unmanned aerial vehicle” capable of carrying one or two RPGs of the RPG-22/26 family. Kasyanov also noted the drone can carry the RPG-7 grenade launcher, other small arms, or even a bomb weighing around 11 pounds. 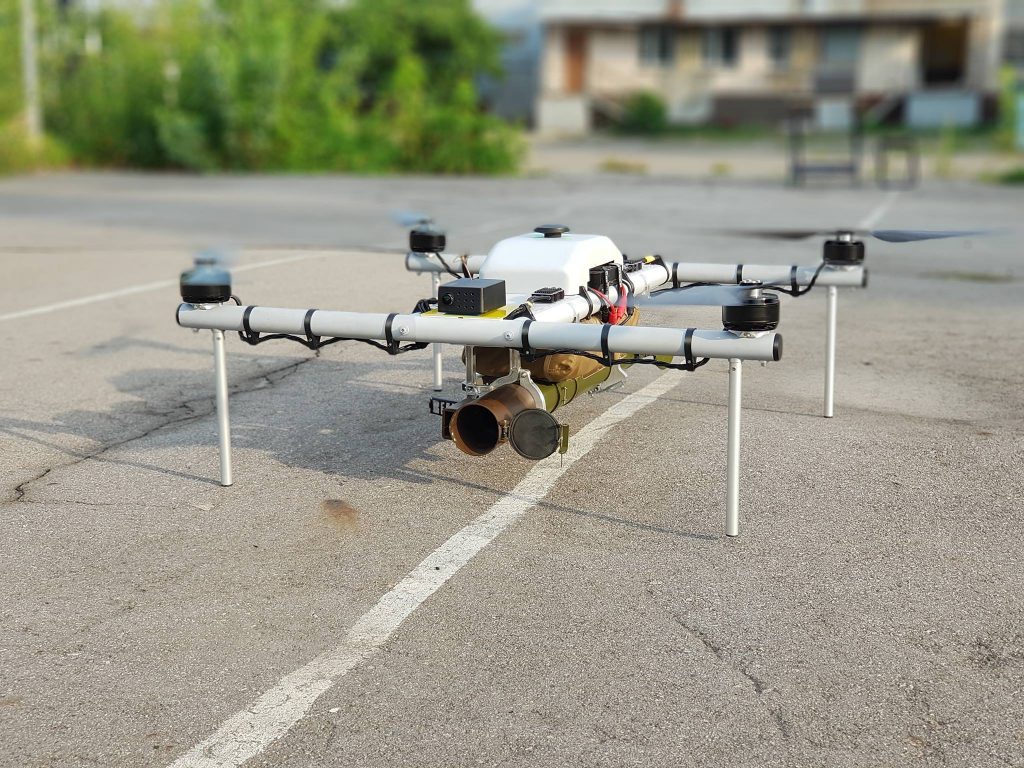 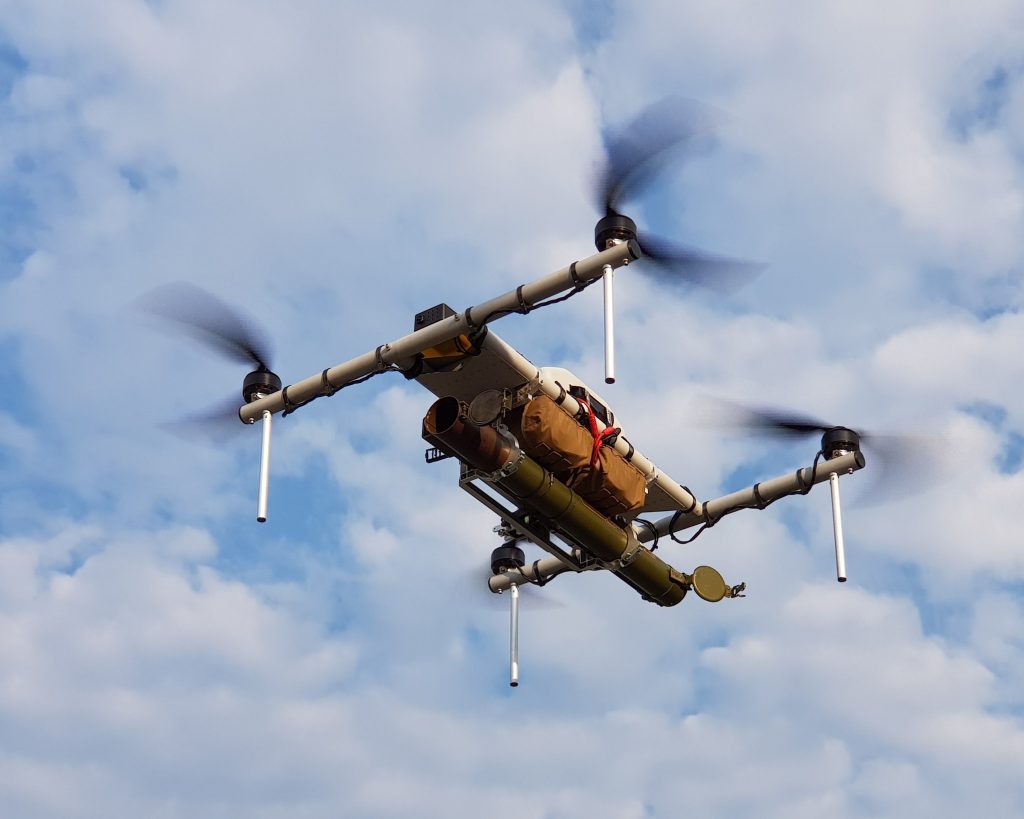 In the same post, Kasyanov set out some operational roles for the Demon. Carrying a reusable weapon like a grenade launcher, he sees it as a tool for ambush and precision strikes on armored vehicles, entrenched positions, anti-air equipment, and other targets at a range of up to 6 miles, with a video feed fed to the operator through the kind of signal repeater that Matrix UAV has demonstrated on its Chimera drone. There’s also a one-way option for the Demon, where it takes a 15-pound payload of explosives and then crashes into a target up to 12 miles away, detonating like a missile. With a hybrid engine and an explosive payload half the size, the Kasyanov projects a range of up to 55 miles for this drone, though that is an extraordinary amount of reach to take without some verification in testing first. (It would also turn drone attacks like the one in Venezuela from a potentially deadly novelty into a major security risk). 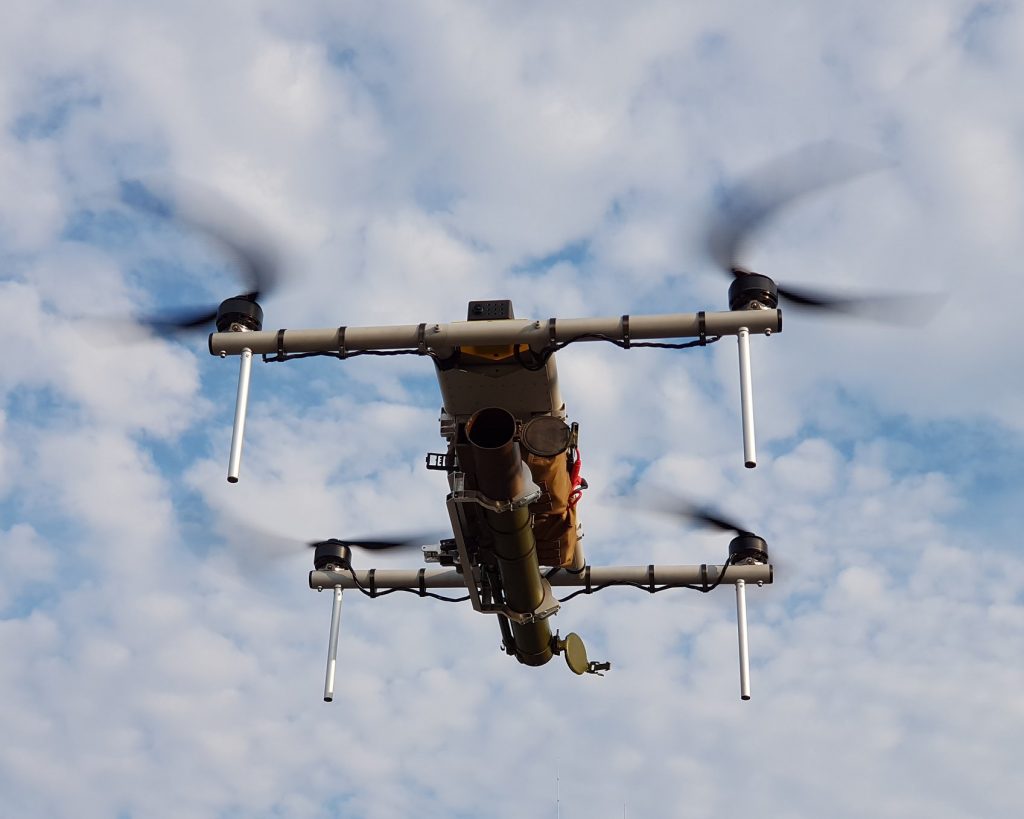 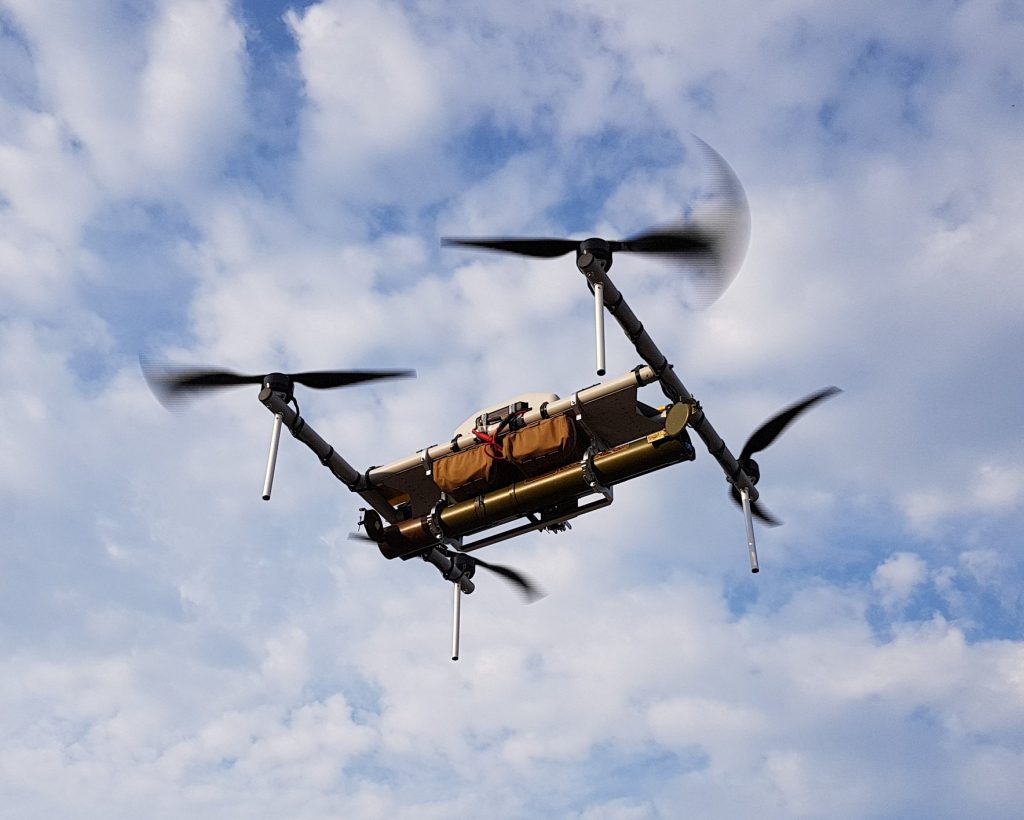 Matrix UAV already boasts the Comandor drone, a gas-powered octocopter marketed as a tool for everything from firefighting to anti-tank weapon platform to battlefield delivery of medical supplies. And the Demon isn’t even the first “quadcopter, but with an RPG” on it that we’ve seen debuted in an Eastern European country this year. In June, Belarus showed off a quadcopter where the engines were directly attached to an RPG-26. At the time, it seemed a scaled down version of other, more expensive rocket-launching drones marketed to advanced militaries. Now, with the debut of the Demon prototype, this is a trend. Vintage Soviet rocket launchers, paired with cheap modern engines and advances in remote control, are elevating squad-level drones from mere scouts into deadly ambush weapons.

Drones like this are, for now, still closer to the hand-tossed grenades of Gavotti than they are to the destructive power of the bombers that emerged on the other side of the 1910s. Don’t expect it to remain that way for long Drone use is evolving rapidly, and Ukraine is already the site of fighting between forces with cheap drones on both sides.

Drone is an expansive category, a catch-all name that transcended its aerial target past and now universally covers any flying machine operating under human-controlled or human-directed flight, without any people on board. How far can we stretch this definition? What about an rocket launcher, with four rotors attached, remotely controlled from the ground. As absurd as it sounds, it is also real: 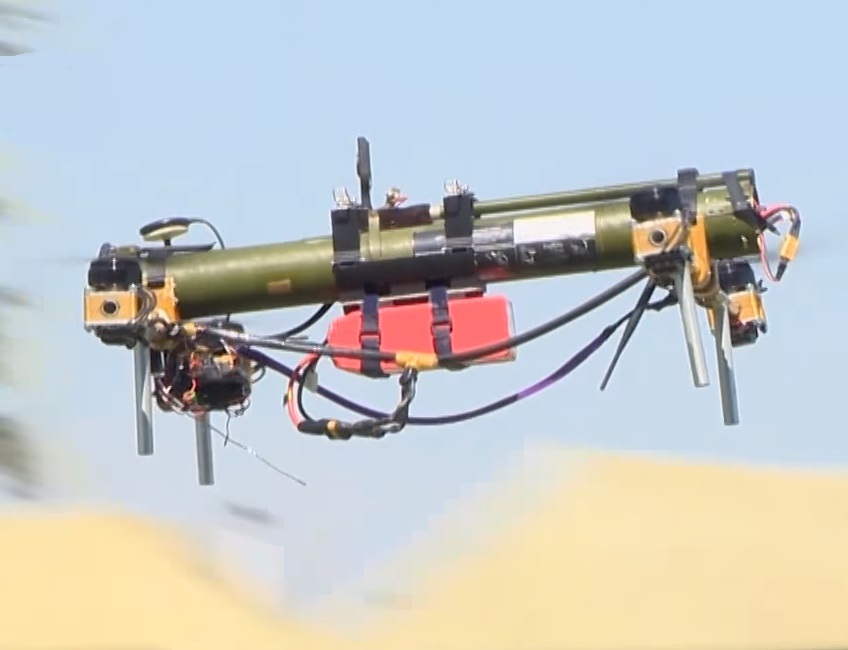 This drone was spotted by Defense Blog, which notes that the rocket launcher appears to be an old single-shot Soviet model, the RPG-26. In the video, the drone takes off and launches seconds afterwards, which is the likeliest scenario for a machine like this. Electric motors and battery power are enough to keep small, light, camera drones in the air for about half an hour, but any increase in payload weight really drags down the flight time. And, given that the weapon is single-shot, it’s unlikely that any future unit of infantry armed with a flying rpg launcher is going to want to use that machine for scouting. That’s a job for cheaper, simpler drones. Instead, should this be fielded, we can expect to see it pop up from behind cover to strike at armor from above without immediately jeopardizing the human doing the firing.

Putting an RPG on a drone (or, really, putting drone parts on and around an RPG) is a novel way to give people on foot cheap air support, but it’s hardly the only way. The confusingly named “Predator AX-1” is an RPG round in a single use drone body, meant to be fired by infantry at lightly armored targets, and it has a cousin in the Switchblade drones adopted by the U.S. Marine Corps. And between the two, there are drones like the Velvet Wasp that are designed to glide-launch RPG warheads from a normal octocopter body.

The overall trend, for anyone trying to guess at infantry armaments in the next five to ten years, is that air support will be a thing infantry can provide for itself. The low sky immediately above the heads of people doing the fighting is a contested space. And the armor on the tops of tanks, APCs, and other armored vehicles is again a weak point that can be exploited by a canny foe.

Should the infantry miss with the single-shot Belarusian RPD drone, there’s already an upgrade sitting next to it: a heftier quadcopter, this time with two RPS slung beneath its rotors.