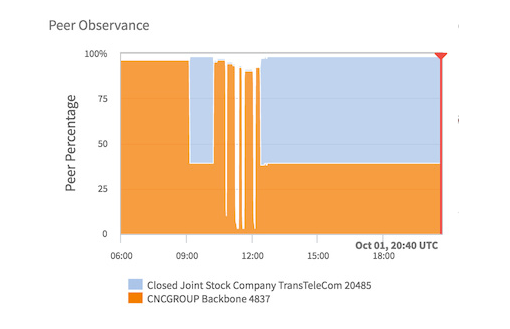 Global Internet connectivity to Star JV. The orange denotes the China Unicom connection and blue the TransTeleCom. The graphic shows the Russian connection coming online around 0900 UTC, a short period of instability then a stable connection with two networks. (Dyn Research)

A major Russian telecommunications company appears to have begun providing an Internet connection to North Korea. The new link supplements one from China and will provide back-up to Pyongyang at a time the US government is reportedly attacking its Internet infrastructure and pressuring China to end all business with North Korea.

The connection, from TransTeleCom, began appearing in Internet routing [BGP4] databases at 09:08 UTC on Sunday, or around 17:38 Pyongyang time on Sunday evening. Internet routing databases map the thousands of connections between telecom providers and enable computers to figure out the best route to a destination.

Until now, Internet users in North Korea and those outside accessing North Korean websites were all funneled along the same route connecting North Korean ISP Star JV and the global Internet: A China Unicom link that has been in operation since 2010.

“The addition of Russian transit would create new internet path out of the country, increasing its resilience and international bandwidth capacity,” said Doug Madory, who analyzes global Internet connectivity at Dyn Research.

After this report was published, TransTeleCom issued a brief statement that didn’t directly address the link but didn’t dispute it.

“TransTeleCom (TTK) has historically had a connection to the communication network of North Korea under the agreement with Korea Posts and Telecommunications Corp, which was signed in 2009,” it said.

The new link comes at an interesting time.

On Saturday, The Washington Post reported that US Cyber Command has been carrying out denial of service attacks against North Korean hackers affiliated with the Reconnaissance General Bureau. The attacks attempt to overwhelm their computers and the Internet connection with traffic making them slow or impossible to use.

The US cyber attack was due to end on Saturday, reported the Post. That means the new Russian connection went online just after the US Cyber Command attack ended.

TransTeleCom, or TTK, is one of Russia’s biggest telecommunications companies and a subsidiary of the Russian railway operator.

Fiber optic lines are laid alongside the railway and, according to a map on its website, on a route from Vladivostok right up to the North Korean border.

That’s presumably at the Friendship Bridge, a railway crossing over the Tumen River that connects Khasan in Russia with Tumangang in North Korea. It’s the only connection between the two countries.

This isn’t the first time North Korea has had alternate routes for Internet connectivity.

From 2012 for about a year, a second link to Star JV existed via Intelsat, an international satellite telecommunications operator, but in recent years the Chinese link has been the sole connection to Star JV.

Relying on one Internet provider has always left North Korea in a precarious situation.

More than once the link has been the target of denial of service attacks. Most were claimed by the “Anonymous” hacking collective, but on at least one previous occasion, many wondered if US intelligence services had carried out the action.

North Korea has few Internet users, but access to the network is available at major universities, to foreigners via smartphone, at government departments and major companies. Elite families are also suspected of having access. The cyber units of North Korea’s military also enjoy access.

The link is also vital for overseas researchers and academics who rely on access to North Korean state media websites for information.