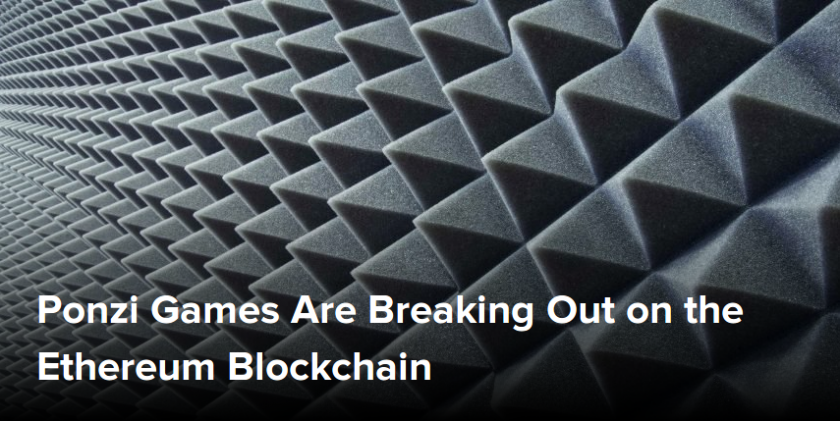 The hottest new apps on ethereum resemble an old favorite: the Ponzi scheme. At least that’s the early consensus on FOMO 3D and PoWH3D, two of the platform’s top three apps entering Tuesday.

According to data website DappRadar, both games have amassed 20,000 ether ($9 million) in trading volume over the last 24 hours, a figure that puts them on par with top decentralized exchanges and that exceeds the highest highs of CryptoKitties, the blockchain’s most famous viral decentralized application (dapp) to date.

Perhaps unique to both projects though is how they create an incentive to bring new people in so users can share the spoils as they do so. Both applications also collapse if new users quit joining in a way that’s similar to a basic pyramid scheme.

However, these particular games make it much more complicated (and maybe more fun).

“At the core, they seem to be taking the ideas of pay-per-bid auction models that were popular in 2009–2011, except instead of selling ‘real’ products for the bid price, they sell nothing tangible or of real value,” Sid Kalla, of token project consulting firm Turing Advisory Group, told CoinDesk.

In penny auctions, people paid a tiny amount of money to make a bid on a real item. The final winning bidder might get a deal, but the organization running the auction would make many times over the price of the item from the fees collected on the way to that bid.

At least then auctioneers took on some risk: the cost of the item and operational costs. With these games, there’s none (except perhaps indictments).

Both projects appear to be by the same group, which calls itself “TeamJUST.” The creators are keeping themselves anonymous and were not immediately available for comment. The two products have sparked a furor among crypto enthusiasts, who are warning buyers not to support what they allege are pyramid schemes.

“One thing for certain, this thing won’t end well.”

But financial blogger JP Konig was more philosophical, writing on Twitter, “It is human nature to seek out gambling opportunities like Ponzis. Till now the only option has been shoddily-run offline Ponzis. If ethereum’s relatively clean Ponzis displace the bad ones, the world is (a bit) better off.”

As Konig points out, Ponzi schemes are nothing new on the blockchain. Dapp Radar founder Skirmantas Januskas pointed out PoWH 3D on March 31 with a Medium post. “Let’s be honest, this is a pyramid scheme. Every user is getting paid for the users that join later,” he wrote.

But what seems to be developing now is a sense of traction around the projects. While PoWH 3D has been on the blockchain a while, it wasn’t till mid-July that it started to really rise on the dapp charts, perhaps helped in part by TeamJUST’s followup, Fomo3D.

And it may be that the games’ very sketchy nature was part of the charm. Both projects have sites that make light of their approach. In many ways, they strike a similar tone to July 2017’s Useless Ethereum Token, the ICO that measured buyer’s contributions in the number of big screen televisions its creator could purchase.

As the rise of these newer games shows, though, that promise still seems to work.

The “PoWH” in PoWH 3D’s name stands for “proof of weak hands.”

Using a token called P3D and a custom decentralized exchange for users to buy it and sell it, the creators added some elaborate features to make a relatively simple and familiar idea more fun on a blockchain. Every time someone does either, it levies a 10 percent fee. That fee is then distributed to everyone still holding the token.

It also rewards users for creating affiliate links that draw people in, and rewards them for sticking around over time. It calls these functions ‘staking’ and ‘mining.’

As the site puts it: “Yes, our staking and mining systems are comedic jabs at cryptocurrency as a whole, they’re also immensely more fun, and reward in (ETH) instead of something that ‘may’ have value later.”

And its creators argue that you can’t call it a scheme if it’s upfront about how everything works:

“We recognize that a trustless smart-contract managing value in this way simply was not possible before this point in computing history. There’s no scheming here at all – it’s upfront, honest and completely transparent.”

Fomo3D, which launched on July 8, is another TeamJUST game that recalls “The Button,” an experiment that ran on Reddit in 2015, which itself evoked penny auctions (without any money on the line).

In the Reddit game, a simple button was accompanied by a 60-second timer. When a user clicked the button, the timer would reset. If no one clicked it, the timer would run out and the game would end. It took two months and over 1 million clicks before someone let the timer run out.

Fomo3D works in a similar way, except pushing the metaphorical button costs a little money. There are now over 21,400 ether (nearly $10 million) on the line at the time of writing. Users of the game buy a “key,” and each purchase sets the countdown (currently at around 24 hours) back by a certain amount.

As the game’s wiki explains, “Players receive a stream of passive income from the game as keys are bought during the round. These rewards can be withdrawn anytime.”

To massively simplify how this very weird game ends, fundamentally: when the countdown runs out, the smart contract “drains,” or pays out. Winners depend on which “team” a person joins and — to make it weirder still  — part of the winnings can even go to holders PoWH 3D’s token.

In that way, it’s helping convince users in its first game to stay in. And it seems to be working: Fomo3D has far more transactions over the last day so far than its predecessor.

Fomo3D consciously evokes the seedier corners of the cryptocurrency industry. The username of the last player to buy a key is splashed across the site with the warning that they’re “exit scamming,” the practice of taking investors’ funds through an ICO and making off with the money rather than building whatever product was promised.

Scam or be scammed

Creativity and humor aside, most think the change in tone isn’t enough to brush aside concerns.

“I think it appeals to people as a way to gamble with some ‘exciting’ rules of the game,” Kalla said. “Given some of the time frames on which this operates, it wouldn’t be surprising to see this run for a while before losing steam.”

For some critics, the cheeky references to scams are a bit too on-the-nose. The most upvoted comment on one Reddit thread about FoMo3D – “my wife still doesn’t believe in mee” – is a reference to the most notorious (recent) crypto Ponzi scheme, BitConnect.

The joke may be on the players though. Péter Szilágyi, one of ethereum’s more well-known developers, took the time to detail an attack that could potentially take one of the schemes down on Reddit this week. Which raises the question: if the stakes behind a game designed to rob its players gets stolen, did the thief really do anything wrong?

The answer may be one that the dapps’ users are soon to find out.