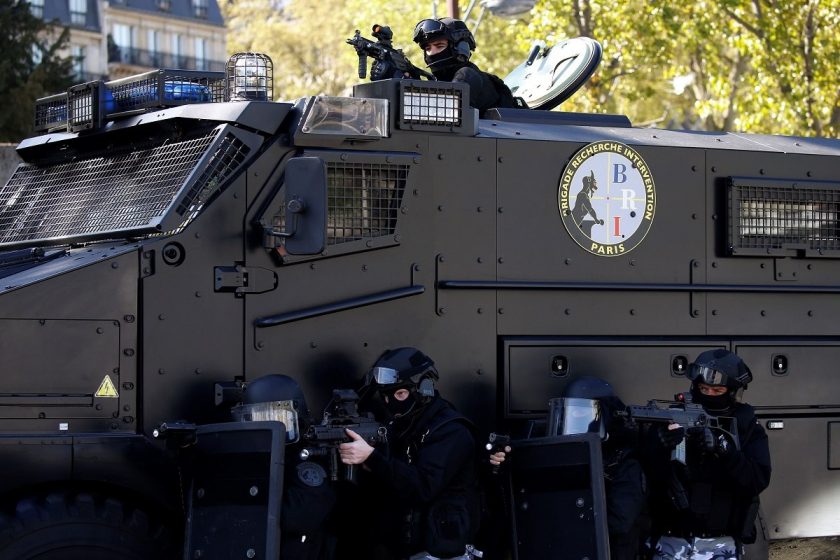 Members of the French national police elite research intervention group hold their shields as they take part in an exhibition with the group’s new armored truck Titus in Paris on May 4, 2016. (Thomas Samson/AFP via Getty Images)

The six-wheeled vehicle serves as a multipurpose platform to develop capabilities that could one day be fitted to vehicles such as the Griffon troop carrier.

One of the capabilities is a captive UAV tethered to the vehicle, which could be used for observation and artillery targeting, a Nexter executive told journalists May 16. The UAV can fly to a height of 50 meters.

A quieter option is a small, stand-alone UAV, which can also be launched from the vehicle’s roof for reconnaissance missions.

The hull has an outside compartment to deploy small unmanned ground vehicles, or UGV, to detect improvised explosive devices as well as chemical, biological and radiation weapons.

The vehicle is armed with a remote controlled 20mm cannon, with options for a 25mm or 30mm weapon. The gun, UGV and UAV could be controlled inside or outside the vehicle with a smart pad.

Another capability that could be installed includes a “virtual fence” for facial recognition for the vehicle’s crew and troops.

Nexter displayed the demonstrator vehicle at an artillery day event in December at the Canjuers Army base in the southeast of France.

Nexter also showed off Themis, a tracked UGV armed with a 20mm gun. The vehicle is supplied by Milrem of Estonia.

Themis is armed with an ARX 20mm remote controlled cannon with a 2-kilometer range and armor piercing shells. Other options are 12.7mm and 14.5mm heavy machine guns.

The vehicle could support disembarked troops with heavy firepower and be used to open roads. Themis weighs 1 ton, travels at 24 kph and has an all-terrain capability. It is powered by electricity and diesel, with the latter delivering an endurance of 10 hours.

Many countries, particularly for special forces, have shown interest in the vehicle, a Nexter executive said. A firing test is due to be held this year.

Nexter will display these weapon systems at the Eurosatory trade show, which runs June 11-15.