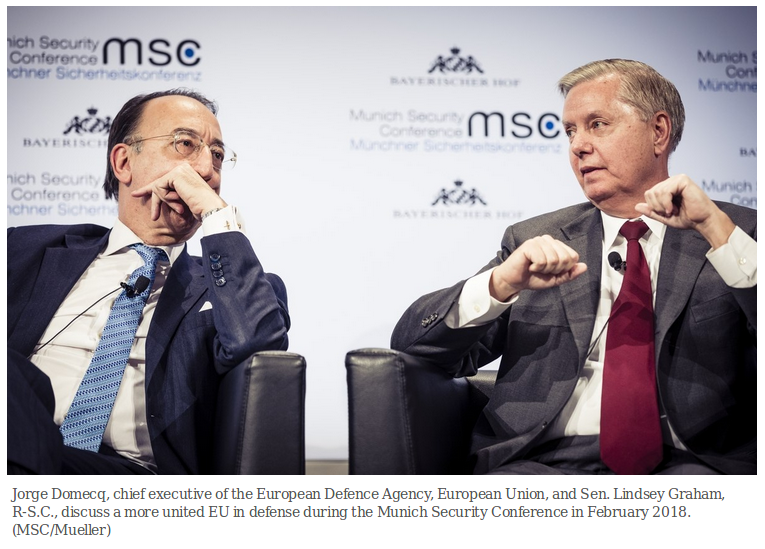 PARIS – The chief of the European Defense Agency said Europe must wean itself from U.S. high-tech weaponry, proposing that arms deals with Washington could decrease in an effort to achieve greater “strategic autonomy” for the continent.

Jorge Domecq said the development would be a natural outcome of emerging efforts by the European Union to boost its military capabilities. “Does strategic autonomy mean less business in one direction?” he asked during a speech at the Eurosatory defense trade show here.

“Perhaps,” he answered his own question before posing another: “But do we want to continue a business relationship across the Atlantic which is undoubtedly unbalanced but unhealthy in terms of the defense capability of Europe?”

Domecq indirectly criticized the Pentagon for plowing ahead with what he characterized as “disruptive technologies” that are no longer interoperable with European allies.

The trend of nations here purchasing advanced U.S. capabilities should stop if Europe wants to stand on its own feet militarily, he argued. “If you have capabilities for which you don’t have the industrial capacity to sustain them, and you have to ask the neighbor to give you the hose each time you want to water the plants, you don’t have a garden; you have a dry piece of land.”

The Spaniard’s talk is sure to evoke mixed reactions on the other side of the Atlantic. While President Trump has repeatedly demanded greater haste from Europeans in building up their own defenses against a resurgent Russia, the prospect of Europe dialing back U.S. arms imports as a consequence is unlikely to sit well with American vendors and their advocates in Congress.

There is no need for Washington’s defense industry hawks to worry quite yet, however. Europe is still catching up in certain technology areas and military spending remains comparatively low. In addition, Eastern European countries like Poland continue to favor U.S. equipment over their neighbors’ offerings no matter what, regarding it as a kind of political insurance policy against Moscow.

Domecq cautioned against the idea of interpreting EU strategic autonomy as being squarely directed at the United States. Washington itself should have an interest in the development, as it would improve Europe’s standing as “an interesting partner for our allies,” he said.

The EDA chief’s comments come as the European Union is slated to make key decisions this year about a new wave of common funding for defense projects under the Permanent Structure Cooperation (PESCO) umbrella. They also follow deepening consternation by many Europeans over an escalating trade war with the Trump administration that they perceive as fundamentally illogical.

Domecq’s agency is involved in key aspects of an emerging European defense bureaucracy, including formulating new defense requirements across the EU member states.

During his speech, Domecq pointed to the United States as a role model for integrating the defense industry into the government’s broader national security playbook. A similar degree of interplay, he argued, would be key to realizing European defense ambitions.