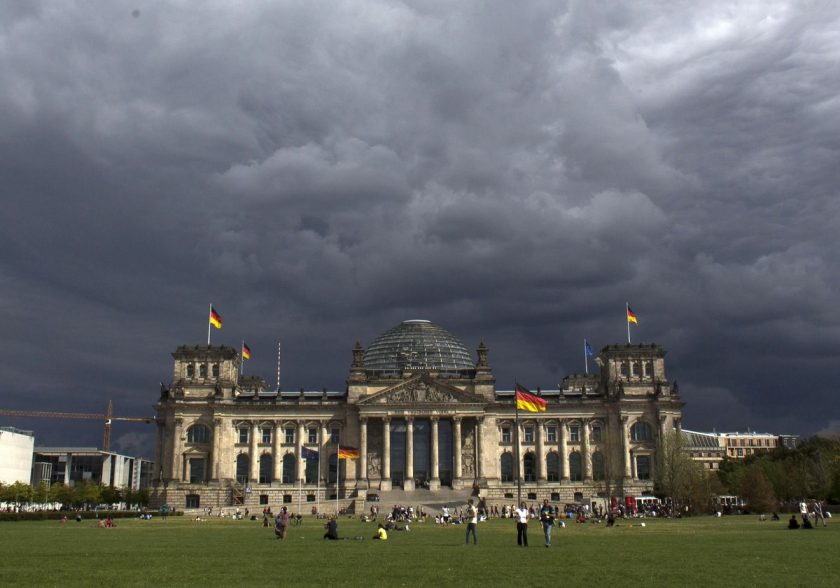 Dark clouds hang over the Reichstag, the German parliament building in Berlin. A group of lawmakers are arguing that U.S. vendors were rightfully excluded from a drone program. (Markus Schreiber/AP)

COLOGNE, Germany ― In an attempt to rally fellow Social Democrats behind a key vote on Israel-supplied drones, a group of lawmakers this week argued that U.S. vendors were rightfully excluded from the program because of past scandals involving spying by the National Security Agency and Facebook data breaches.

The three members, who belong to the SPD contingent in the Bundestag’s Defence Committee, made the connection in a May 28 letter to Social Democrats in parliament. The missive came just as the government had requested approval for a plan to lease five weapons-capable Heron TP drones from Israel at a cost of roughly $1 billion.

Given the SPD’s support for the Heron TP plan, passage in the Bundestag in the next few weeks is likely, though officials said surprises remain possible given the topic’s thorniness.

“Following the experiences with American high-tech in view of the NSA scandal, the ‘black boxes’ of the Euro Hawk and the scandals surrounding Facebook, we are disinclined to make ourselves dependent on U.S. technology when it comes to reconnaissance capabilities,” wrote Rolf Mützenich, Fritz Felgentreu and Karl-Heinz Brunner.

The paragraph appears to refer to revelations some years ago of the NSA’s spying on leaders of U.S. allies and Facebook’s large-scale loss of user data. The term “black boxes” refers to the defunct Euro Hawk spy drone, whose encryption and data links would have remained in U.S. hands and out Germany’s control.

General Atomics, which had hoped to sell its Sky Guardian drone, a derivative of the Predator, was excluded from the competition on the grounds that the company would be unable to meet the Bundeswehr’s performance specifications. The company has unsuccessfully appealed the decision, arguing it can deliver at a lower cost.

To be clear, the SPD lawmakers’ argument in favor of the Israeli solution relies on more than reference to past scandals that made huge waves in Germany. For example, the three members cite the benefits of keeping in place the key players of an existing arrangement with the Heron TP’s predecessor, the Heron 1, that they claim has served German forces well.

But mention of a latent mistrust toward U.S. defense equipment is noteworthy because it comes from lawmakers of one of the majority parties, serving as evidence that crucial U.S. allies could jump on the chance to diversify their roster of suppliers.

The motion also comes as Europeans brace for a trade war with the United States. On May 31, the Trump administration announced that tariffs on steel and aluminum imported from the European Union would go into effect at midnight.

Such a trade war is sure to bring more uncertainty for defense companies on both sides of the Atlantic.