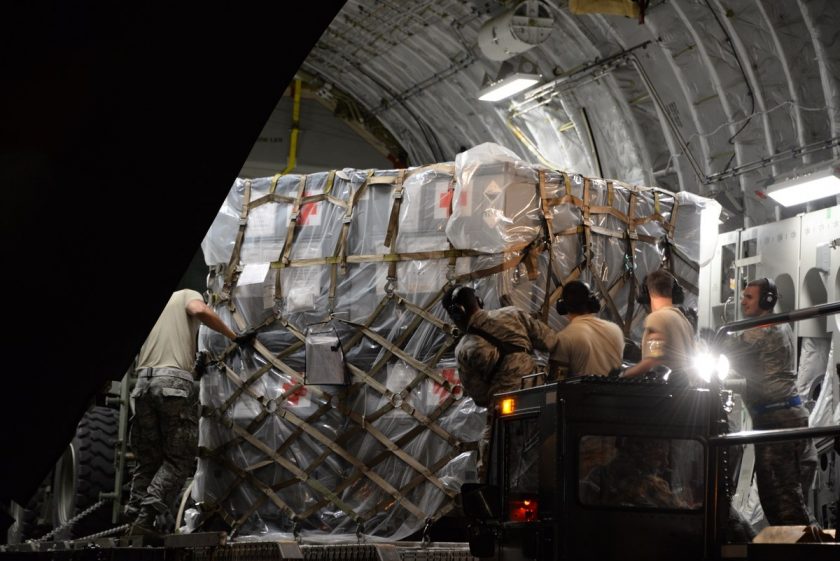 A 2017 Newsweek report revealed that the U.S. Army lost more than $1 billion worth of weapons in Iraq and Kuwait due to lax controls and record keeping.

This problem is not unique to the Army; the challenge of tracking goods has dogged military operations since Roman times. When there are thousands of troops and hundreds of thousands of shipments on the move, getting assets from Point A to Points B, C, and D, is a logistical nightmare.

Every military in history has tried to improve logistics tracking, but it grows more complex with every new theater of operation. The introduction of active RFID (aRFID) tags was a major step forward in knowing where a shipment is, but that doesn’t mean you know when it will arrive.

The problem is compounded when using multiple modes of transportation – where pallets of weapons systems parts or meals are delivered by truck to a train, then carried to a port and loaded on a ship, then unloaded onto another truck. These transshipment points complicate accurate tracking.

Today, aRFID readers record when a shipment passes a reader location and sends it to the in-transit visibility system. Should a shipment arrive at the wrong base or warehouse, logistics personnel can take steps to get the shipment back on track. However, rerouting takes time – the enemy of efficiency. Even now, it takes far more manual labor than it should to get military supplies where they need to be. A reliable system that provides broader, deeper visibility would save military operations valuable time and money and permit better resource utilization.

Fortunately, that system is now a reality.

With the advent of the Internet of Things (IoT), more sophisticated sensors can track cargo in real time. Global satellite and cellular communications combined with data analytics give the military mastery of its supply chain. These IoT-enabled sensors have pinpoint accuracy and can not only transmit on different communications networks, but also watch for changes in environmental conditions, such as temperature or physical shock readings. (Electronic devices are sensitive to G forces, such as those that result from dropping a container or a collision.)

It’s not an easy change. Each branch of the Armed Forces, as well as the Defense Logistics Agency, all have unique supply systems. They all use the DoD’s MILSTRIP (Military Standard Requisitioning and Issue Procedures), which provides a commonality of language, but their different systems mean there isn’t a commonality and consistency of data.

Achieving this level of consistency requires a big data platform akin to that used by Facebook or Amazon to manage massive amounts of real-time data. The platform must be able to cleanse and normalize data from many government and private sector sources while assessing data quality. Analytics capabilities backed by machine learning can quickly identify data outliers and predict not only the arrival time of shipments, but have the predictive ability to improve future planning.

For newcomers to this level of visibility, deployment of this platform could first be applied to critical items, and set up as an exception-based system, providing notification when a shipment is out of place or has been damaged. These alerts allow logistics personnel to focus on what’s important, rather than getting overwhelmed by the flood of information.

Using IoT-enabled sensors promises to wring a lot of excess out of the logistics system. There are many inefficiencies in ordering and managing inventory levels because personnel can’t be confident that critical supplies will arrive when promised. With more consistent delivery schedules and better visibility of shipment location, logistics managers could carry lower levels of excess inventory. It wouldn’t take much of a reduction in overages for the military to achieve major cost savings. Factor in the annual savings of carrying less inventory, and the return on investment for adding IoT-enabled sensors is clear.

The current RFID-based system doesn’t have to be completely replaced. There are many instances in the supply chain where knowing a shipment’s last location is good enough — if you’re shipping paper supplies or cleaning equipment, you probably don’t need to know where it is every hour. Furthermore, some systems can mix current RFID tags with new cellular or aRFID/cellular hybrid sensors allowing the military to use their investments through end of life.

For weapons systems, critical spare parts, and food — real-time location information isn’t just a nice to have, it’s a must-have. Luckily for the U.S. military, precise visibility gives operations teams shipment an estimated time of arrival, they can trust, along with the data needed to reduce excess inventory. Military leaders can rely on connected devices to deliver unprecedented levels of insight into supply chains, arming them with the most relevant data and ensuring informed decisions.

Jim Hayden is the chief technical officer at Savi Technologies, a sensor company based in Virginia. Rosemary Johnston is the company’s senior vice president for government sales and operations.