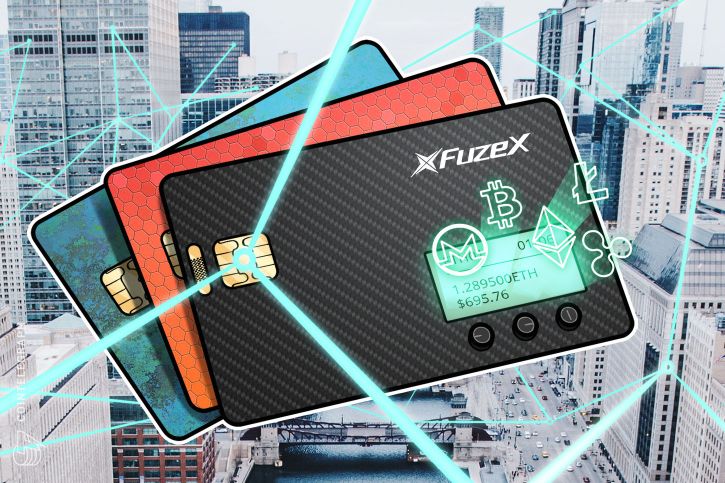 Buying a bottle of water quickly and spontaneously using cryptocurrency is still a massive challenge, but the company behind a new ecosystem says its technology will make it easy for crypto holders to use their funds for everyday purchases – all without creating a headache for merchants.

FuzeX has created a smart eCard that enables shoppers to store up to 15 cryptocurrency accounts, 10 debit or credit cards and five reward accounts in one place. Buttons integrated into the eCard allow users to decide which account they want to use to make a purchase, with the current balance for each shown on an ePaper display so they can be aware and confident of having adequate funds. The eCard’s battery life lasts for 45 to 60 days, and it is easily rechargeable.

Although furnished with industry-standard technology such as near field communication (NFC) – the tool that makes contactless payments from old-fashioned debit card readers possible – FuzeX says other security features were added to help it to stand out from traditional cards. For example, its eCard can be locked whenever a Bluetooth connection to the user’s accompanying FuzeX wallet is deactivated, and the eCard can also be wiped remotely if it is lost or stolen. Through the wallet, available as an app for iOS or Android, users can also see where their card has been used on an interactive map – as well as send, receive and exchange cryptocurrencies.

FuzeX’s technology has been tried and tested, with the company saying it has already “successfully developed, brought to market, sold and shipped more than 20,000 Fuze cards.” These smart eCards only offered payments through credit, debit or reward cards – and in 2017, the company says it managed to reach the dizzying heights of crowdfunding success, soaring to the top 0.01 percent of projects on Indiegogo after raising $2.2 mln.

The company says its proven concept and distinctive features mean there are high barriers to entry for rivals who may try to replicate its product. When compared with competitors, FuzeX says it is the only provider offering a smart eCard, with other providers supporting cryptocurrencies and nothing else. Rival cards also have to be prepaid, while FuzeX users can get payments debited directly from their account.

The company has now concluded its initial coin offering. For now, it says FXT tokens can be used to purchase FuzeX charges and pay for “small annual memberships” necessitated by its partnerships with issuers. Although it is possible to pay for membership using other cryptocurrencies and fiat, FuzeX offers discounts when FXT is used.

FXT tokens have now been listed on four cryptocurrency exchanges. As of May 10, they are available on the Taiwan-based Cobinhood exchange, where promotions are taking place to herald the arrival of FXT. It has also been listed on HitBTC, COSS and Livecoin.