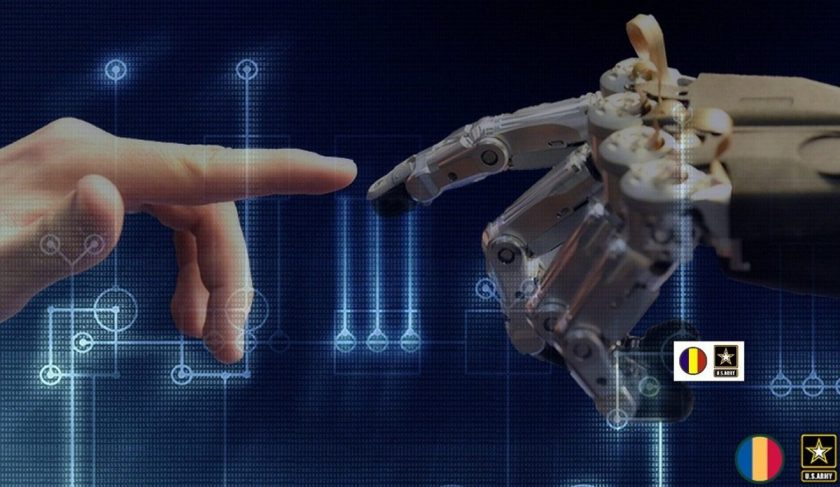 The term “bioconvergence” summons images of Terminator-type cyborg warriors, but that isn’t quite what the Army has in mind.

At its Mad Scientist 2018: Bio Convergence & Soldier 2050 event, held in early March in Menlo Park. California, the Army Training & Doctrine Command (TRADOC) convened military and industry experts to ponder a future in which humans and machines work in close cooperation.

Robot warriors? No. Rather, bioconvergence looks at the ways in which soldiers can be more tightly linked to computer-driven processes. It’s about faster battlefield decision making, machines aiding human through intuitive processes, automation and integration. As vice president of federal partnerships with contractor SRI, Peter Kant worked with Army to co-produce the conference. We asked him to shed some light on the evolving relationship between soldiers and technologies.

C4ISRNET: Bioconvergence: Humans and machines coming together. Can we start with a present-day example?

KANT: The first that is quite ubiquitous is the impact of Google and your brain. I don’t have to remember everything. In fact, I can quickly access any number of facts, capabilities, information, from anywhere in the world almost instantaneously from my phone or computer.

The second, which is less ubiquitous, is relatively newer technologies in robotic assistance for people. SRI, for example, has developed technologies, wearable robotics. People are able to put on a pair of pants or a vest or a sleeve that is able to help them move if they have had an injury from battle or just happened to have a neurological disease that limits their movement and capabilities. The robot will help them move, but it’s a part of who they are, not something external, separate from the body.

C4ISRNET: What’s the military potential for all of this?

KANT: It may be new ways of employing precision medicine, almost individualized medicine, to augment the capabilities of the soldier: how alert they are, their strength, their tenacity, to how quickly they can heal.

It may be about allowing the human body to direct and use a whole bunch of engineered systems, technology, that are separate from the body but respond directly to inputs from the soldier. Pilots certainly do that now in flying an airplane. But flying an airplane with your mind or with voice control, moving other assets around the battlefield by looking, by thinking, by speaking — all are very much possible in this war fighting of the future.

C4ISRNET: I’m going to fly a drone with my mind?

KANT: I do think we get very close to that. It’s the idea of mission-based communication, saying things like: ‘Hey, drone, can you go tell me what’s over there and let me know and let me know if there’s anything I really should be worried about?’ It’s about saying that as a conversation. How do I navigate around? How do I deal with weather? How much fuel do I have? Much of that can be offloaded onto the drone itself, when you’re really doing this mission-driven communication with machines.

C4ISRNET: So a lot of this is about relationships: It’s about having a more intuitive relationship between soldiers and their tools?

KANT: That is correct.

C4ISRNET: How did that play out at the recent conference?

KANT: There were a number of elements that had to do with really connecting human intent and direction to the capabilities of technology, the idea that with advances in artificial intelligence and human-machine interfaces, we can pilot, direct, see much further and do more things with technology with a more natural way of interacting.

C4ISRNET: What technologies will make us more in tune with our battlefield tools?

KANT: Many of the advances are in what we call low-shot learning, ways in which machine learning can happen with less data. Natural language understanding on the machine side is critical to these advances — and we’ve made major advances.

It’s the ability to speak in natural language, understand the tone, so when you ask a question and I say ‘right’ [affirmative] or ‘ri-i-i-ight’ [sarcastic] or ‘right … ?’ [skeptical], you get the tone very differently. You understand the different meanings. That ability to communicate more [complete] intent and meaning is critical to these technologies, and those are major advances that are happening now. It’s about natural language and dealing with unstructured data. That will enable a lot more intuitive communication between humans and machines.

C4ISRNET: What kind of networking, what kind of IT infrastructure, will the military need to support this kind of bioconverged communication?

KANT: The amount of information that we are talking about is immense. Carrying that information instantaneously or as fast as possible, which is critical in war-fighting activity, is really important and it’s something we have to build out. There are lots of advances as we continue to move to 5G and other ways in which these infrastructures are created, and we may also need to invent more of them. That is a major element of development going forward.

C4ISRNET: Five years from now: What does the bioconverged battlefield look like?

KANT: We see the interaction of drones of various forms. We see high speed analytics taking in lots of video imagery, satellite imagery, data on the ground, and machines very quickly interpreting and providing intelligence back to people to make decisions. That’s going to be an exceedingly important part of warfare — and all of that comes through bioconvergence.

The ability for humans and machines to seamlessly direct and collaborate with machines will be a major change in warfare, probably one of the most dramatic changes in defense posture and war-fighting strategy in the future.