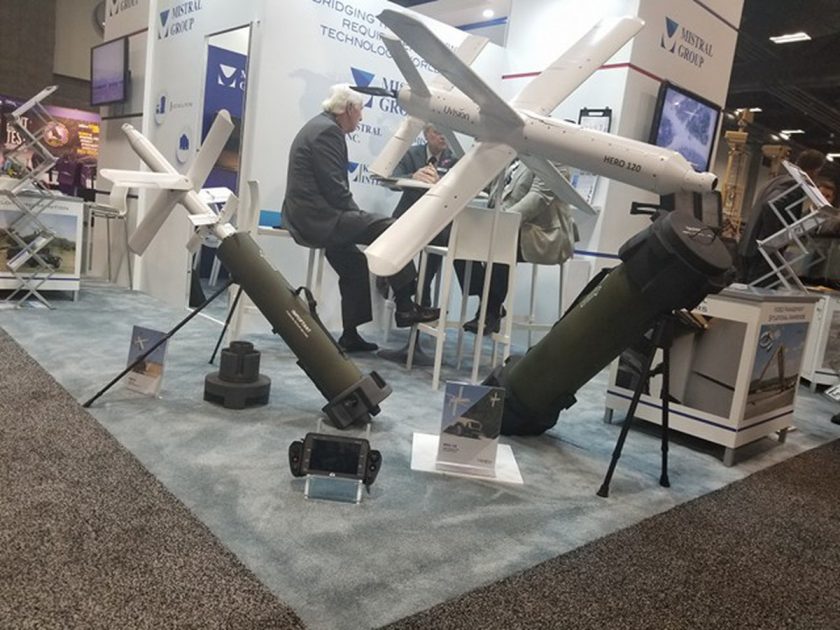 The Corps is in search of a tube-launched drone with an integrated warhead that can loiter over suspected targets at sea or air and strike with deadly precision.

On Monday, the Corps’ Rapid Capabilities Office with the Marine Corps Warfighting Laboratory submitted a request for information from potential industry leaders for an “organic precision fires” system that is capable of providing “fire support at distances of 40-60 km” and be used against stationary, mobile land or sea targets in all operating environments, the RFI states.

The Corps wants the system to be man-portable and “launched pneumatically from a canister or tube” with a tube smaller than 10 inches in diameter and 96 inches in length, according to the RFI.

The Marines want the system to be easily controlled during flight and impact of the munition.

The Corps also wants the system to have long-range communications capability, so operators can link with the system at distances of 25 to 60 kilometers.

And they want the “ability to engage and attack a variety to include personnel, vehicle and facilities via cursor on target and / or GPS location,” the RFI states.

The U.S. military already fields a smaller version of a kamikaze-like drone called the Switchblade, made by AeroVironment. But the small packable drone only has a 10 km radius and ten minutes of flight endurance.

The Corps wants its system to push nearly 60 kilometers with one to two hours of flight endurance.

However, AeroVironment recently conducted a successful test of a hybrid system onboard a U.S. Navy coastal riverine craft that uses a larger RQ-20 Puma surveillance drone in conjunction with the Switchblade, according to an April press release.

The RQ-20 packs a 15-kilometer range and nearly three hours of flight endurance, and conducts surveillance of suspected hostile targets. The Puma can pass on coordinates to smaller Switchblade drones that engage and destroy enemy targets, according to the company’s press release.

But Mistral’s Uvision drones may come closer to what the Corps is looking for. Mistral makes two pneumatic launched tactical missile drones called Hero 30 and the larger Hero 120. The drones have a 30 minute and one hour loiter time respectively.

They are both relatively small, weighing less than an FGM-148 Javelin anti-tank missile.

The Marines have been experimenting with various systems for dual use purposes like the firing of a HIMARS artillery rocket systems from the deck of a Navy ship.

The development also comes as the Corps is issuing small quadcopter drones to every rifle squad, a program routinely called “quads for squads” by Corps officials.

Mistral’s Uvision drones are light, man-packable and come armed with a warhead, giving U.S. special operations forces added lethality in areas where support by conventional forces may be limited or non-existent, according to Yossi Gez, the vice president of marketing for Mistral Inc.

The drones come in two variants, the smaller Hero 30 and larger Hero 120, both of which operate on pneumatic launch capability, or air pressure.

The Hero 30 weighs under 20 pounds and has a loiter time of 30 minutes. The small tactical drone comes with an anti-personnel warhead that is also capable of destroying small light-skinned vehicles, according to Gez.

The drones can also be mounted on trucks. A forward-deployed recon team could pack 10 of these on a vehicle and launch them all at once to “clear the way” of enemy forces, Gez said.

Mistral offers a larger variant of the Hero 30 for operations in more advanced countries, where enemy forces may have tanks and larger or more sophisticated weaponry.

The Hero 120 has a one hour loiter time and weighs less than an FGM-148 Javelin anti-tank missile. The drone packs a larger warhead for destroying up-armored vehicles and tanks, according to Gez.

Both drones operate with the same controller and have day-night capabilities. The drones have an added feature that allows for handover of control. Meaning, a small outpost could launch the drone towards a recon team operating outside the base, and hand over control of the drone to the team on the ground.

The Uvision also works in GPS constrained environments, and operators need only to navigate the terrain to strike enemy forces with pinpoint precision, according to Gez.

Army Special Forces has already put the Uvision through extensive testing and is heavily interested in the Uvision system, Gez said.