“Sometimes you overlook a cool idea, and then it’s just literally right in front of your nose”

A single quantum particle can send a two-way signal, scientists have discovered – something that’s impossible in classical physics. That means a particle can essentially send messages to itself thanks to the whacky state of uncertainty known as superposition.

Superposition states that one particle can occupy two positions at once, and that’s how the two-way communication happens.

A single photon, or particle of light, can be used to get a message to two people in the same time it would normally take the signal to get to just one.

Further down the line, not only could quantum communication prove to be much more secure than the systems we have today, it could also be significantly faster, according to the researchers behind the new study.

“If we want to transmit messages between different locations, it seems obvious that whatever object stores and carries this information, has to appear at all of these locations,” says one of the team, Flavio Del Santo from the University of Vienna in Austria.

“However, if we put the physical carrier into a quantum superposition of those locations, it has an amazing power to collect, store, and carry the information from distinct locations simultaneously.”

To put it another way, it’s like being able to visit and pass on a message to two of your friends at once, say the researchers, rather than visiting one friend and then the other.

Del Santo and his colleague Borivoje Dakić from the Austrian Academy of Sciences have published a paper based on their theoretical calculations, and have since followed it up with an experiment that shows the idea in action.

To understand how it works though, a little dip into the complex world of quantum mechanics is required. 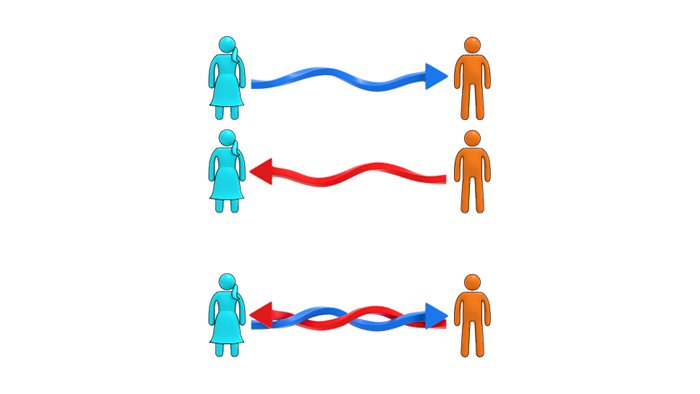 “Consider the simplest scenario, where two players, Alice and Bob, want to exchange a simple bit of information, i.e. either 0 or 1,” Dakić explained to Lisa Zyga at Phys.org.

“They encode their respective bits or messages at the same time, directly into the superposition state of a quantum particle. Once the information is encoded, the partners send their parts of quantum particle towards each other.”

What’s then needed is some kind of smart device and mechanism between our two players, which can route the parts of the particle depending on its contents.

“For example, if the particle ends up with Alice, she would know that Bob’s bit was just opposite from her bit, and vice versa,” says Dakić.

Alice and Bob have therefore sent and received a message in the same time as it would take a message to pass from one to the other under a classical physics system.

To get some experimental evidence for their idea, Del Santo and Dakić set up a single photon in a state of superposition, with mirrors and other optical devices between two stations representing Alice and Bob.

Having encoded the photon with a 0 or 1 at each station, it was then sent to the opposite station – as the photon interacted with itself along the way, either amplifying or dampening its signal, it determined which station received the photon.

A write-up of that experiment has yet to be peer-reviewed but is available to read on the pre-print server arXiv.org. It’s another example of the way quantum mechanics can change the way we think about the Universe around us.

“Sometimes you overlook a cool idea, and then it’s just literally right in front of your nose,” University of Vienna physicist Philip Walther, who was involved in the follow-up experiment, told Emily Conover at Science News.

The theoretical part of the research has already been published in Physical Review Letters.

In this Letter we show that communication when restricted to a single information carrier (i.e., single particle) and finite speed of propagation is fundamentally limited for classical systems. On the other hand, quantum systems can surpass this limitation. We show that communication bounded to the exchange of a single quantum particle (in superposition of different spatial locations) can result in “two-way signaling,” which is impossible in classical physics. We quantify the discrepancy between classical and quantum scenarios by the probability of winning a game played by distant players. We generalize our result to an arbitrary number of parties and we show that the probability of success is asymptotically decreasing to zero as the number of parties grows, for all classical strategies. In contrast, quantum strategy allows players to win the game with certainty.

(a) Space-time diagram. Within the time window τ either A signals to B or B to A. (b) Causal diagram. There are two possible causal relations between variables x, y, a, b; i.e., either x influences a and b, a influences b (in general, a can be generated in past of b, i.e., at time t=0), whereas y influences b only (left) or vice versa (right).

Communication with a single quantum particle. The particle is prepared in superposition of two spatial locations A and B. At time t=0 Alice and Bob encode their inputs and send their “parts of the particle” to the partner. On the way, the particle hits the unitary device (e.g., potential barrier) and gets half-reflected and half-transmitted in a coherent way (see main text). (a) If the parity of inputs is s=0, the transformation U deterministically guides the particle to Alice’s location. (b) An analogous situation where s=1 and the particle deterministically ends at Bob’s location.